Despite calls from many pundits and pols for him to quit, Sen. Bernie Sanders continues to rally thousands of Americans to a program of profound social and economic change, reports Rick Sterling.

Vallejo is geographically close but economically far from more affluent San Francisco Bay Area cities to the south. In 2008, the city of Vallejo filed for bankruptcy. On Wednesday, the Bernie Sanders campaign came to Vallejo.

The gathering was held in a huge grassy area alongside the water estuary. The area was enclosed with security fencing so that audience members all had to pass through metal detectors. Ninety minutes before Sanders’ speech, the line to go through the security screening was half a mile long. Yet spirits were high with a buzz in the air. 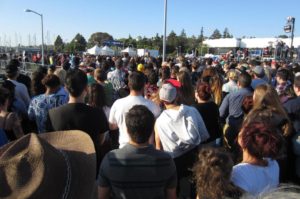 The audience of 8,000 to 10,000 was mostly young, students or working class and ethnically diverse. Many had only learned Sanders was coming via Facebook that day or the day before. I chatted with people patiently waiting as the line slowly advanced. I asked two young African-American women why they supported Sanders.

The answer: “He seems real; he seems consistent; and because the others will take us to hell!”

I asked three Latino young adults why they support Sanders. The answer: “Bernie will help the working class. Because we need affordable education.” I noticed he said “working class,” not “middle class.” A young Hispanic couple responded simply “Why support Bernie? The future.” Other answers were “climate change,” “criminal justice,” “education” and “he’s got vision.”

As the event began, an African-American organizer from Oakland spoke, then the Filipina President of California Nurses Association, then San Francisco Supervisor Jane Kim followed by organizers from the Bernie team advising the audience about voting in the California primary on June 7. Cenk Uygur of The Young Turks revved up the crowd then Sanders took the stage.

Toward the front, the crowd was packed together with shorter people unable to see beyond their neighbors. let alone the stage. The sun was starting to set and a breeze came off the water. It had been an unusually hot day. Sanders spoke for nearly an hour. He recalled how the pundits had dismissed his campaign from the start, saying his ideas were “too bold and radical.” Sanders said he has won 46 percent of the pledged delegates to date, with six states remaining including the largest in the country.

–the campaign finance system is corrupt and undermining democracy

–the economy is “rigged” with the rich taking it all

–the infrastructure is collapsing with school children in Flint, Michigan, poisoned by tap water

–the criminal justice system is broken, with the government spending $80 billion locking up 2.2 million people

–police departments have been militarized

–why does the government always have money for wars but not to rebuild inner cities?

–we are destroying the planet – what kind of legacy is that?

–workers needs a living wage which is $15 per hour minimum

–we need immigration reform and end to deportations

Sanders spoke of the need to “Stand up and fight back. … With unity of black, brown, gay, straight, male, female …. There is nothing we cannot accomplish. … We are going to the convention to win the nomination.”

Six months ago I was skeptical of Bernie Sanders campaign. Not anymore. He has been tremendously successful in showing the world there are huge numbers of Americans, especially youth, who want major changes in society and government policy. He has raised the consciousness of millions, sharply contrasting Wall Street’s wealth at the expense of working people.

He does not speak much on foreign policy, but what he does say indicates a significant improvement. In Vallejo, his only foreign policy comments were asking why we are rebuilding Afghanistan when we should be rebuilding inner cities at home. It’s a good point, which matches his overall position of stopping a foreign policy of aggression and “regime change.”

Will Bernie Sanders fold up his campaign, corral his supporters and cheer for the Democratic Establishment after they have made some token changes in their platform? It’s possible, but I doubt it. Why? Because I think what some of the young people said is likely true: He is consistent and he does have integrity.

His campaign has been based around the needs of working people versus a corrupt Establishment which the Democratic Party is part of. Sanders has highlighted the class nature of our economic system and media. He has focused a bright light on Wall Street and Hillary Clinton’s complicity. These lessons are not going to be forgotten or easily retracted.

For those on the Left who disparage Sanders, I say take another look. Listen to his words and more importantly talk with his crowds of supporters. They are the future and we should be working with them. Not preaching dogmatically, but listening. The thousands in Vallejo shouting “Bernie! Bernie!” seem to be doing so because they want the “bold and radical change” previously dismissed by pundits.

Rick Sterling has been an organizer and activist for about 45 years. He currently works with Task Force on the Americas, Mt Diablo Peace & Justice Center and Syria Solidarity Movement. The views expressed in this article are his own. He can be contacted at rsterling1@gmail.com

← The Clinton-Colombia Connection
US Downplays a New Syrian Massacre →