Washington’s neocon foreign policy establishment follows the Israeli-Saudi line on Iran, denouncing its every move, an approach that brings out the worst in the Iranians and raises the risk of war, notes ex-CIA analyst Paul R. Pillar.

Psychologists have observed that most of us favor a self-serving way of explaining the good and bad conduct of others with whom we interact. While we are quite comfortable with attributing some of the good to our own benign influence, we attribute all of the bad to the other person’s character and refuse to accept that our own conduct may have influenced what the other person is doing.

This phenomenon arises frequently in foreign affairs. It is common with, for example, American perceptions of anti-U.S. international terrorism. The dominant popular concept is that terrorists do what they do because of their own malign nature. To the extent that terrorists focus on the United States, we like to think this is because, as former President George W. Bush put it, they hate our democratic values.

This view refuses to accept that what the United States does overseas has anything to do with motivating the terrorism — even though countless interrogations of captured terrorists, statements by groups, and other evidence strongly indicate that U.S. actions abroad have indeed had much to do with such motivations.

A variation on this pattern that also arises in international relations involves logical inconsistency not only between attributions of desirable and undesirable conduct but also between explanations of the conduct of states we consider friends and the conduct of those we consider foes. This variation was visible in a panel discussion last week organized by the Middle East Institute and in which I participated.

The subject of the event was policy toward Iran, and much of the discussion concerned intra-regional rivalries involving Iran, of which the rivalry between Iran and Saudi Arabia is the most prominent. Those who favor taking the side of the Saudis in this rivalry need to deal with the reality that the interests of the participants in this contest are different from U.S. interests, and there is no good reason for the United States to take sides in such a local quarrel.

Moreover, if what we are worried about is destructive and destabilizing behavior in the region, Saudi Arabia has been doing more of that lately than Iran, most conspicuously with its highly destructive military intervention in Yemen. Those who nonetheless want the United States to tilt even more in favor of the Saudis and against Iran than it already is thus need to be creative in contriving their arguments.

An argument that Dennis Ross has constructed is that “the Saudis acted in Yemen in no small part because they feared the United States would impose no limits on Iranian expansion in the area, and they felt the need to draw their own lines.”

Even setting side how far divorced from reality is a perception that the United States is imposing “no limits on Iranian expansion” and how much more such a perception would say about Saudi paranoia than about U.S. policy, the argument is implausible — especially in view of the entire history of the Saudi perspective toward, and handling of, Yemeni affairs.

The Saudis have long had much angst, for reasons that don’t necessarily have anything to do with Iran, about its poorer and more densely populated neighbor to the south. Back in the 1960s they got involved in an earlier civil war in Yemen, when the other major external protagonist was Egypt. [See Consortiumnews.com’s “Yemen as Vietnam or Afghanistan.”]

The Houthi rebels who are engaged in the current civil war have received some Iranian aid but they certainly are not Iranian proxies; they even reportedly rejected Iranian advice not to move into the capital Sana.

The biggest changes pertinent to the more aggressive Saudi conduct in the past couple of years have been the accession of King Salman, with a determination to throw Saudi weight around the region more assertively than under his predecessor, and the accumulation of power by his young son Mohammed bin Salman, for whom the Yemeni war has been one of the biggest ways of making his mark.

If there have been any Saudi thoughts about U.S. limit-drawing, they haven’t had to do with Yemen, where the United States has very much taken sides and supported the Saudi military offensive.

Note what Ross’s argument, implausible though it is, says about the presumed relationship between U.S. policy or action and a regional state’s conduct. The presumption is that the state is hypersensitive to what the United States does and that U.S. policy is a big influence on the other state’s conduct, even if the only variation in U.S. policy that is in question is between slightly greater or lesser degrees of favoritism in what already is a substantial U.S. tilt in that same state’s favor.

Such a view is greatly different from the view, propounded by many of the same people, of how U.S. words and actions do or do not influence the conduct if Iran. With Iran, the presumption is instead that the sources of undesirable Iranian conduct are to be found in Iran itself.

It is the psychologist’s classic example of attributing bad behavior entirely to bad character on the part of the other party. Iran gets routinely described as led by hateful religious fanatics who don’t think like ourselves or like other statesmen, who are out to destroy other countries, and who are so incorrigible in their bad traits that moderation over time is not to be expected. 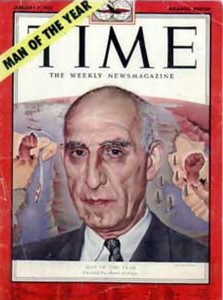 Iran’s former Prime Minister Mohammed Mossadegh as pictured on the cover of Time magazine as 1951’s “Man of the Year.” Two years later, he was overthrown by a CIA-sponsored coup.

Some of this view was heard at last week’s panel, with bills of particulars about Iranian conduct (the relevance of which rests on that implicit assumption about how the Islamic Republic of Iran will never change significantly) stretching back many years.

Missing from this view is recognition of how Iranian conduct or comments that we do not like may be at least partly in response to our own conduct or comments that Iranians not only do not like but have good reason to perceive as threatening. Certainly the United States has given the Iranians plenty of material of this sort to which to react — and this goes well beyond the most salient historical episodes such as the 1953 coup and the 1988 shooting down of a civilian airliner (accidental, but still perceived as intentional by probably most Iranians).

There have been all the many references to a possible military attack on Iran as if that would be just another policy option, the forward deployments of U.S. military forces, the continued economic warfare against Iran and threats to wage still more of it, the cyberwarfare, the torrent of rhetoric filled with enmity, and all the other continuing indications of hostility.

Obviously there is gross inconsistency here in interpretations of the conduct of states in the Persian Gulf region. The interpretation applied to a state on one side of the Gulf assumes hypersensitivity to what the U.S. says and does, with even just some disappointment in the amount of gusto with which the United States takes that state’s side supposedly being enough to stimulate that country to bomb the heck out of some other neighboring country.

With regard to those perceived as friends, the kind of unquestioned side-taking the Saudis would like to see from the United States is as likely to excuse and enable destructive behavior as it is to prevent it. The U.S. support for the Saudi offensive in Yemen has been as clear an example of this as anything.

Another, more long-running, example in the Middle East has been how the unquestioned U.S. financial and diplomatic support for Israel has enabled the destructive (and self-destructive) Israeli policies regarding occupation of the Palestinian territories.

With regard to foes, hostile words and actions engage mechanisms that amplify the hostility of the response. There is, for example, a tendency in such relationships to make worst-case assumptions about the other side’s intentions. That is involved in what political scientists call a security dilemma, in which even measures that are taking for purely defensive reasons are interpreted by the other side as offensive and threatening.

There also are other ways in which, as psychologists would explain, threats and fear lead to destructive striking back. This phenomenon is not even unique to our species; it is shared by some normally docile herbivorous creatures that become aggressive and dangerous when they feel threatened.

Moreover, some conduct we consider undesirable on the part of states that are ostracized and punished is almost forced on them by the ostracism and punishment. A state is naturally going to resort to irregular and asymmetric tactics if it has been denied more regular means of pursuing its interests.

In the panel discussion last week there was disapproving reference made to money laundering and other irregularities involving Iranian banks, but as a member of the audience correctly noted, we should not be surprised to see this kind of thing when Iran is denied full access to the regular global banking system.

Similar phenomena have arisen with other countries besides Iran. Arthur Schlesinger, Jr. wrote about how “if you shape policy to what you regard as a predestined result, chances are that you will get the result you predestine.” Using a example from the 1980s, Schlesinger noted, “Having decided a priori that the Nicaraguan revolution was a Soviet-Cuban conspiracy, Washington gave the Sandinistas no alternative but the Cubans and Russians.”

None of this is to deny the genuinely bad traits and tendencies that are present in some of the entities involved, regardless of the policies of others toward those entities. There are some valid reasons to consider leaders of the Sandinistas as bad dudes, and there certainly have been bad dudes, and still are, with significant influence inside the Iranian regime.

But good statesmanship involves not just taking broader badness as predestined, but instead using one’s own policies to encourage what is desirable and to discourage what is undesirable in the policies of others.

It would be nice if the kind of uber-empathetic approach toward the Saudis that is embodied in Ross’s assertion about Saudi policy toward Yemen would lead to applying even a fraction of such how-others-see-us awareness to how the Iranians see and respond to U.S. policies, rhetoric, and actions.

But unfortunately much American debate about Iran reflects a determination based on other reasons to take sides and to keep Iran ostracized forever, no matter the logical inconsistencies.

← In Case You Missed…
Seeing Humanity in ‘Enemy’ States →