Longtime observers of American politics have noted striking parallels between the unpredictable wartime election of 1968 and the bizarre presidential contest of 2016, another time of war and distress, as Michael Winship recalls.

For those too young to remember, imagine: As fighting in Vietnam rages on and the Tet Offensive makes us all too aware of the futility of our Southeast Asian military fiasco, Minnesota Sen. Eugene McCarthy decides to run as an antiwar candidate against incumbent President Lyndon Johnson. 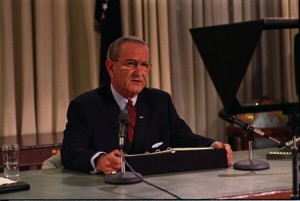 On March 31, 1968, President Lyndon Johnson announced that he would not seek reelection and devote the remainder of his presidency to bringing the Vietnam War to an end. (Photo credit: LBJ Library by Yoichi Okamoto)

Supported by an army of “Clean for Gene” college students knocking on doors and making phone calls, McCarthy does surprisingly well, and then New York Sen. Robert Kennedy gets into the race, too. Johnson makes a surprise announcement that he will not seek a second term in the White House and McCarthy and Kennedy duke it out in the primaries.

In the midst of all this, civil rights giant Martin Luther King Jr., is assassinated in Memphis, Tennessee, and riots erupt across the cities of the United States. Two months later, Kennedy is murdered in the kitchen of a Los Angeles hotel just minutes after winning the California primary.

In August, eight years after his defeat by John F. Kennedy, the Republicans bring back Richard Nixon as their presidential candidate and the Democrats select Vice President Hubert Humphrey, who has not run in a single primary, as their party’s standard bearer.

Simultaneously, a police riot against protesters outside the Democratic convention in Chicago leaves an indelible image of chaos, tear gas and blood. Nixon wins the election with a well-executed campaign set to the accompaniment of dog whistle signals against minorities and left-wing dissenters.

Oh, and one other thing — Alabama Gov. George Wallace, arch segregationist and race baiter, runs as the third-party candidate of the American Independent Party, campaigning as a rebel populist seeking the votes of the angry, white working class. He wins almost 10 million votes and carries five states in the South.

All of which brings me to one of the curiosities of that manic ‘68 campaign season, a slim volume written by Russell Baker, former New York Times columnist and veteran White House and congressional reporter. First serialized in The Saturday Evening Post, it was published as a book under the title Our Next President: The Incredible Story of What Happened in the 1968 Elections.

But here’s the thing: Baker’s book was written before all the events I just described. It was imaginary, a work of speculative fiction that soon found the real thing giving it a run for its money. And yet, much of what Baker dreamed up presaged what really happened and is eerily reminiscent of what’s going on in 2016 America.

In the book, President Johnson is indeed as besieged as the actual LBJ – “being ground in a politics of frustration more bitter than any could remember since the Depression election of 1932,” Baker writes. “A seemingly endless war, record food prices, rising taxes, intractable poverty, a surly unmanageable Congress and now an incipient revolution of race – and Johnson bore the burden of public blame for all.” It’s all too similar to the climate today.

But in Baker’s version of history, Johnson uses his legendary political wiles to create a scenario that he believes will lead to his reelection – Hubert Humphrey is made to step down as vice president, becoming secretary of state, and Kennedy is named as the next vice president, creating a Johnson-Kennedy ticket. Pandemonium ensues.

As in the actual summer of 1968, there are race riots that impact the campaign and as is the case in 2016, the Republican Party is in complete disarray, riven by a plethora of potential candidates, many of whose names may now seem unfamiliar but all of whom were genuine presidential possibilities – Mitt Romney’s father, George, the governor of Michigan; Ohio Gov. James Rhodes; former Pennsylvania Gov. William Scranton and Illinois Sen. Charles Percy, among others. There’s Nixon, of course, New York’s Gov. Nelson Rockefeller and, oh yes, California Gov. Ronald Reagan.

George Wallace is prominent in Baker’s story, too, running just as he really did in 1968… and in 1972 (when he was shot and forever after wheelchair-bound)… and in 1976. Here’s Baker’s description of the Southern populist’s campaign:

“Wallace’s crude animal reaction to the complexities of American society found a sympathetic hearing that summer among millions baffled by the speed at which the future was hurtling upon them and frustrated by their individual impotence against the tyranny of vast computerized organizations spreading through American life. With his snake-oil miracle cures, Wallace satisfied a deep public yearning to be deluded with promises of easy solutions.”

If, as Mark Twain supposedly said, history does not repeat itself but certainly does rhyme, Russell Baker’s description of the state of the union nearly 50 years ago and a Wallace candidacy that’s so very much like Donald Trump’s is as blank verse from the past, reflecting a national mood that today is perhaps even more confused and enraged.

I’m far from the first to draw the parallel. George Wallace’s own daughter, Peggy Wallace Kennedy, recently told National Public Radio that both men have played to our basest instincts. “Trump and my father say out loud what people are thinking but don’t have the courage to say,” she said. “They both were able to adopt the notion that fear and hate are the two greatest motivators of voters that feel alienated from government.”

And back in January, Dan T. Carter wrote in The New York Times, “Both George Wallace and Donald Trump are part of a long national history of scapegoating minorities: from the Irish, Catholics, Asians, Eastern European immigrants and Jews to Muslims and Latino immigrants. During times of insecurity, a sizable minority of Americans has been drawn to forceful figures who confidently promise the destruction of all enemies, real and imagined, allowing Americans to return to a past that never existed.”

An aversion to spoilers tempts me to not tell you how Baker’s story ends but you may have trouble tracking down a copy of this long out-of-print little book, so here it is: the three-way election – Johnson vs. Lindsay vs. Wallace – is deadlocked in the Electoral College. As per the Constitution, the choice of president is turned over to the House of Representatives, and the Senate chooses the vice president. A series of maneuvers, miscalculations and skullduggery ultimately results in a second President Kennedy.

We should be so lucky.

Michael Winship is the Emmy Award-winning senior writer of Moyers & Company and BillMoyers.com, and a former senior writing fellow at the policy and advocacy group Demos. Follow him on Twitter at @MichaelWinship. [This article first appeared at http://billmoyers.com/story/ghosts-68-haunt-election-2016/]

← LBJ’s ‘X’ File on Nixon’s ‘Treason’
Democrats, Too Clever by Half on Clinton →