The U.S. government’s reliance on drones to sustain perpetual war in the Mideast is meeting resistance from some assigned to carry out and justify these tactics, including a U.S. Army chaplain who resigned in protest, writes Ann Wright.

U.S. Army Reserve Chaplain Captain Christopher John Antal resigned from the U.S. Army Reserves on April 12 in opposition to U.S policies regarding militarized drones, nuclear weapons and preventive war. Antal stated he could not serve as a chaplain for an “empire” and could not “reconcile his duty to protect and defend America and its constitutional democracy and his commitment to the core principles of his religious faith including justice, equity and compassion and the inherent worth and dignity of every person” with policies of the United States.

His letter of resignation stated that he resigned because he could not support “unaccountable killing” through the U.S. armed drone policy and the Executive Branch claiming “the right to kill anyone, anywhere on earth, at any time, based on secret evidence, in a secret process, undertaken by unidentified officials.”

Antal also cites his opposition to the U.S. nuclear weapons policy calling it a policy of “terror and mutually assured destruction that threatens the existence of humanity and the earth.”

In his letter of resignation, Antal refuses to support the U.S. policy of “preventive war, permanent military supremacy and global power projection” in what he calls “imperial overreach through extra-constitutional authority and impunity from international law.”

From September 2012 through February 2013 Chris Antal was an Army chaplain to a signals battalion supporting the 3rd Infantry Division at Kandahar Airbase in southern Afghanistan. While his unit did not have operational responsibilities for drones, Chaplain Antal saw drones launch and land where he gave services for military personnel killed in Afghanistan and whose remains were being transported back to the United States.

Additionally, he was concerned about the use of drones after hearing about a drone attack in which a grandmother had been killed while picking okra in a field near her home in the region around the military base.

On Veterans’ Day 2012, identifying himself as an Army chaplain in Afghanistan, he posted “A Veterans’ Day Confession for America” on the Unitarian Universalist site, A Quest for Meaning, in the form of a poetic testimony.

Antal wrote, “We have sanitized killing and condoned extrajudicial assassinations … war made easy without due process, protecting ourselves from the human cost of war./We have deceived ourselves…denying the colossal misery our wars inflict on the innocent.” 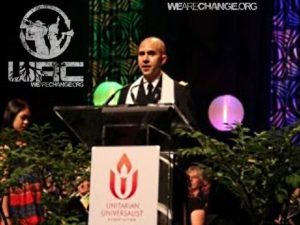 Rev. John Antal, who resigned as an Army chaplain in protest of drone warfare, nuclear weapons and other aspects of America’s perpetual wars.

He had delivered this sermon during a worship service of military personnel and contractors who had freely gathered for a service in the Unitarian Universalist tradition at Kandahar Air Base.

Antal’s commanding officer was informed about his article, told him “you make us look like the bad guys” and “the message does not support the mission.” The commander said he had lost confidence in Antal and had him investigated, grounded from travel and officially reprimanded by a letter from a general officer at Division level.

Antal was sent back to the U.S. with a “do not promote” evaluation and discharged from active duty. Antal challenged the punishment through New York Sen. Kirsten Gillibrand and her congressional inquiry resulted in his re-activation and promotion to Captain in the U.S. Army Reserve.

The Rev. Antal spoke on March 30 at the Veterans for Peace symposium “Inside Drone Warfare: Perspectives of Whistleblowers, Families of Drone Victims and Their Lawyers,” held at the University of Nevada Las Vegas Law School with military and CIA drone whistleblowers. The symposium was held during the week of vigils called “Shut Down Creech 2016” at Creech Drone base, 60 miles outside of Las Vegas.

During his talk at the symposium, Rev. Antal said the U.S. Army had changed its policy on the duties of chaplains to silence dissent on military policies that concern speaking with a “prophetic voice” and on issues of “moral turpitude.”

The phrase speaking with a prophetic voice and issues of moral turpitude was eliminated from the 2015 version of the Chaplain regulations. While the 2015 regulation charges chaplains to speak “with candor as an advocate to confront and support resolution to challenges and issues of the command,” what happened to him when he spoke with candor demonstrates that the Army does not want chaplains speaking truth to power.

The 2009 Regulations for Chaplains states: “3-2  Chaplains, in performing their duties, are expected to speak with a prophetic voice and must confront the issues of religious accommodation, the obstruction of free exercise of religion, and moral turpitude in conflict with the Army values.”

The 2015 version states: “3-2  Chaplains, in performing their duties, are expected to speak with candor as an advocate to confront and support resolution to challenges and issues of the command.”

Currently, Rev. Antal is a minister of the Unitarian Universalist Congregation at Rock Tavern, New York, is the convener of Veterans for Peace Hudson Valley Chapter 177, and chaplain at the Philadelphia VA Medical Center. He is married and has five children.

I hereby resign my commission as an Officer in the United States Army.

I resign because I refuse to support U.S. armed drone policy.  The Executive Branch continues to claim the right to kill anyone, anywhere on earth, at any tie, for secret reasons, based on secret evidence, in a secret process, undertaken by unidentified officials.  I refuse  to support this policy of unaccountable killing.

I resign because I refuse to support U.S. policy of preventive war, permanent military supremacy and global power projection.  The Executive branch continues to claim extra- constitutional authority and impunity from international law.  I refuse to support this policy of imperial overstretch.

I resign because I refuse to serve as an empire chaplain.  I cannot reconcile these policies with wither my sworn duty to protect and defend America and our constitutional democracy or my covenantal commitment to the core principles of my religion faith.  These principles include: justice, equity and compassion in human relations, a free and responsible search for truth; and the inherent worth and dignity of every person.

Ann Wright served 29 years in the U.S. Army/ Army Reserves and retired as a Colonel. She served 16 years as a U.S. diplomat in U.S. Embassies in Nicaragua, Grenada, Somalia, Uzbekistan, Kyrgyzstan, Sierra Leone, Micronesia, Afghanistan and Mongolia. She was on the small team that reopened the U.S. Embassy in Kabul, Afghanistan in December, 2001. She resigned from the U.S. government in March, 2003 in opposition to the war on Iraq.

← Neocons and Neolibs: How Dead Ideas Kill
A Need to Rethink Mideast Wars →