Secretary of State Kerry boasts about how little Iran has gotten from the nuclear deal – accessing only $3 billion of its frozen assets – but that hurts U.S. credibility and endangers the deal, says ex-CIA analyst Paul R. Pillar.

Evidence continues to mount on how lopsided has been the implementation so far of the Joint Comprehensive Plan of Action, a.k.a. the Iran nuclear agreement, with Iran’s rigorous carrying out of its obligations regarding its nuclear program being unmatched by the sort of financial and commercial opening to Iran that was a fundamental part of the bargain that was struck.

The extensive and complicated U.S.-imposed sanctions are still the chief impediment to implementation, thus continuing to demonstrate how U.S. sanctions can actually reduce U.S. influence [4]. A feature of the latest reporting [5] on the subject is that it is not just the Iranians but also Europeans who are crying foul with good reason. 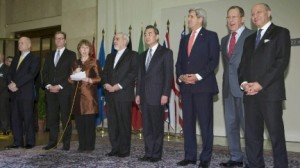 Secretary of State John Kerry (third from right) with other diplomats who negotiated an interim agreement with Iran on its nuclear program, including Iranian Foreign Minister Javad Zarif, (fifth from the right) . (Photo credit: State Department)

Too often forgotten by American opponents of the JCPOA is that it is a multilateral agreement, involving five other states besides the United States and Iran. When the complicated and cumbersome U.S. sanctions scare European banks away from making possible the kind of renewed trade with Iran that the European allies understood to be an intended consequence of the agreement, this presents a problem of U.S. credibility not only with Iran but with the Europeans.

Talk among JCPOA opponents on Capitol Hill about imposing still more sanctions on Iran, in the name of whatever cause, damages U.S. credibility even further.

Further background to the lopsided implementation of the agreement to date concerns Iran getting access to its own money that has been frozen by other states. According to Secretary of State John Kerry, Iran so far has gotten access to only $3 billion of such funds. So much for all that talk by opponents of the agreement about a $150 billion “windfall” that Iran would spend immediately on that nefarious activity that it supposedly loves to do more than anything else.

Some thoughtful observers of the JCPOA, when considering what the Iranians might do in response to U.S. non-compliance, have assessed that Tehran would continue to observe its obligations under the agreement in the hope that it at least would get the benefit of an economic opening to Europe.

But to the extent that U.S. sanctions get in the way of Iranian-European trade, that incentive for continued Iranian compliance goes out the window too. In other words, the Iranians are left with little reason not to renounce the agreement.

Those in the United States who have wanted to kill the JCPOA all along must continue to be called to account and to answer the question of how ending the limitations on, and enhanced international scrutiny of, Iran’s nuclear activities could possibly be in U.S. interests or anybody’s interests. They must continue to be called out on their actual motives, including, for many of them, denying any achievement to Barack Obama and pleasing the Israeli government.

And they must answer for the damage to U.S. credibility with not only Iran and any rogue states in the future but also with the most important European states, not to mention Russia and China.

← What’s Left of Palmyra — and Syria
Is Hillary Clinton ‘Honest’? →

18 comments for “Stiffing Iran on the Nuke Deal”