Because U.S. politicians reflexively bow to whatever Israel wants, any deviation is surprising, such as Bernie Sanders’s call to respect Palestinian rights, especially in contrast to Hillary Clinton’s Israel pandering, notes Marjorie Cohn.

An amazing thing happened at the prime-time Democratic debate in Brooklyn last Thursday. A few days ahead of Tuesday’s delegate-rich New York primary, presidential candidate Bernie Sanders dared to criticize Israel. Rival Hillary Clinton, on the other hand, stood firm as an uncritical apologist for Israel.

CNN’s Wolf Blitzer asked Sanders to explain his assertion that Israel’s actions during the 2014 Israel-Gaza conflict, after Hamas launched rocket attacks on Israel, was “disproportionate and led to the unnecessary loss of life.” Sanders stated that Israel has the right to defend itself and “to live in peace and security without fear of terrorist attack,” adding, “That is not a debate.” 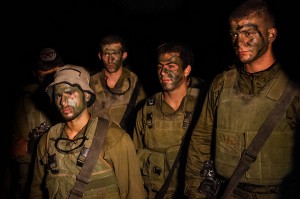 Soldiers from the Israeli Defense Force prepare for the invasion of Gaza, as the second phase of Operation Protective Edge. (IDF Photo)

But Sanders went on to say that 10,000 Palestinian civilians had been wounded and 1,500 were killed. Sanders actually understated the fatalities. According to an independent international commission of inquiry convened by the United Nations Human Rights Council, more than 2,100 Palestinians lost their lives in that conflict. Seventy-one Israelis were killed.

Sanders added, “Now, if you’re asking not just me, but countries all over the world was that a disproportionate attack? The answer is that I believe it was.”

Quoting “official Israeli sources,” the commission reported that Israeli “rockets and mortars hit civilian buildings and infrastructure, including schools and houses, causing direct damage to civilian property amounting to almost $25 million.” The commission found that 18,000 Palestinian housing units were totally or partially destroyed; much of the electrical, water and sanitation infrastructure was incapacitated; and 73 medical facilities and several ambulances were damaged. Moreover, 28 percent of the Palestinian population was displaced.

In international law, the principle of proportionality requires an attack be proportionate to the military advantage sought. Israel did not provide information to the commission to support the conclusion that “the civilian casualties and damage to the targeted and surrounding buildings were not excessive.” The commission therefore found that the Israeli attacks could be disproportionate, and may amount to war crimes.

When Blitzer asked Clinton whether she agreed with Sanders that Israel “overreacts to Palestinians attacks” and that in order to achieve peace, Israel must end its “disproportionate” responses, she demurred, citing the requirement that Israel take “precautions.”

The principle of precautions in international law means Israel had a legal duty to take precautions to avoid or limit civilian casualties. The commission concluded, “In many incidents, however, the weapons used, the timing of the attacks, and the fact that the targets were located in densely populated areas indicate that the Israel Defense Forces [IDF] may not have done everything feasible to avoid or limit civilian casualties.”

Graffiti on the Palestinian side of Israel’s “separation wall” recalls the words of John F. Kennedy in decrying the Berlin Wall with the words in German, “I am a Berliner.” (Photo credit: Marc Venezia)

The commission said that the IDF’s use of roof-knock warnings before the strikes did not constitute effective warning. The commission found that either the people affected didn’t understand that their homes were being subjected to “roof-knocking” or the IDF gave insufficient time for them to evacuate after the warnings.

The commission also criticized Israel for “inferring that anyone remaining in an area that has been the object of a warning is an enemy or a person engaging in ‘terrorist activity.’ Those civilians choosing not to heed a warning do not lose the protection granted by their status. The only way in which civilians lose their protection from attack is by directly participating in the hostilities.”

As the commission pointed out, the targeting of civilians may amount to a war crime as well as a violation of the right to life enshrined in the International Covenant on Civil and Political Rights.

Sanders made another declaration one would not expect from an American politician on national television. He said, “If we are ever going to bring peace to that region which has seen so much hatred and so much war, we are going to have to treat the Palestinian people with respect and dignity.”

But Clinton could not bring herself to agree with Sanders. In fact, Sanders pointed out that during Clinton’s speech to AIPAC (the American Israel Public Affairs Committee) in March, “I heard virtually no discussion at all about the needs of the Palestinian people. Almost none in that speech.”

Clinton did tell AIPAC that “Palestinians should be able to govern themselves in their own state, in peace and dignity,” and she made a veiled reference to “avoiding damaging action, including with respect to settlements.” Israel continues to build illegal settlements on Palestinian land.

But Clinton spoke only of the threat to Israel from the Palestinians and Iran. She called out anti-Semitism, and opposed BDS (boycott, divestment and sanctions), an international nonviolent movement initiated by Palestinian civil society to pressure Israel to end its occupation of Palestinian lands.

In the Brooklyn debate, Sanders said that in order to achieve peace in the region, the United States must play “an even-handed role,” adding, “We cannot continue to be one-sided. There are two sides to the issue.”

But for Clinton there is only one side and that is Israel’s. When she mentioned the Palestinians during the debate, she described them as threats to Israel, focusing only on Hamas. Absent from her remarks was any mention of the humanity of the Palestinian people.

During her address to AIPAC, Clinton advocated “bolstering Israeli missile defenses with new systems.” But she said nothing about providing the Palestinians with missile defenses against 155-millimeter Israeli artillery.

Although Sanders had declined an invitation to personally address AIPAC, he made a statement he would have delivered to the group. It included: “But peace also means security for every Palestinian. It means achieving self-determination, civil rights, and economic well-being for the Palestinian people.”

Sanders also argued for “ending what amounts to the [Israeli] occupation of Palestinian territory, establishing mutually agreed-upon borders, and pulling back settlements in the West Bank,” as well as “ending the economic blockade of Gaza.”

Clinton promised AIPAC that one of the first things she would do as president would be to invite Israeli Prime Minister Benjamin Netanyahu to the White House. She would probably also push to increase the $3.1 billion in military assistance the United States provides to Israel annually—more than to any other country.

There is a vast difference between Sanders and Clinton on Israel. Make no mistake. A President Hillary Clinton would strengthen Israel’s noose around the necks of the Palestinian people. She would not be an honest broker in any process to bring peace to that region.

Marjorie Cohn is a professor at Thomas Jefferson School of Law, former president of the National Lawyers Guild, and deputy secretary general of the International Association of Democratic Lawyers. Her most recent book is Drones and Targeted Killing: Legal, Moral, and Geopolitical Issues. Follow her on Twitter @marjoriecohn. [This article first appeared on Truthdig.]

12 comments for “The Sanders/Clinton Split on Israel”