Pope Francis won wide praise for lightening up on Catholic condemnation of divorce but a closer reading of his text shows him reinforcing the Church’s repressive positions on human sexual behavior, writes Daniel C. Maguire.

It embarrasses me to remember it. In 1960, as a young priest in my very first year in a parish, I took it upon myself to give a two-day retreat to the married people in the parish, to tell them how to live their married lives.

The event should be filed under A, for arrogance or I for ignorance. I am glad the talks were not preserved on YouTube, for much that I said was awful. In condemning contraception I trotted out what was a staple of the time, “A Letter From An Unborn Son.” 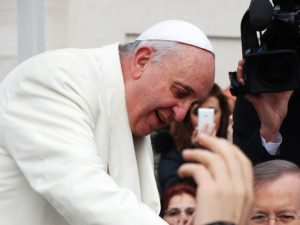 It was an epic of emotional blackmail. It said “I know you did not have me so you could get that new car or that new refrigerator, but that car and that refrigerator will never run up and put their little arms around you like I would have done if you hadn’t used contraceptives.”

Pope Francis too should be embarrassed by the significant failings in his Exhortation The Joy of Love. A fatal flaw in the text is that Francis is singing in an all-male chorus and in that company he embarks on marriage counseling, a field in which neither he nor they have any privileged expertise.

Laity were consulted in the preparation of this Exhortation but their voices are missing in the text, or filtered through the male chorus. Worse yet, Francis’ theology is muddled, and unrepresentative of the best of current Catholic thought. To be fair, Francis admits from the start that what he says makes no claim to infallibility, a healthy admission since some of his mistakes are whoppers.

The Joy of Love is the product of a committee; committee reports are never eloquent and rarely coherent. This one emanated from years of dispute-ridden Synod meetings. It is replete with compromises and contradictions. It has been hailed as a retreat from rule-centered church teaching. But it is no such thing. The old rules hover over its pages like an eminence grise.

To give credit where credit is due, the gospel according to Francis in this and in his other writings redefines “pro-life” and “family value” the shibboleths of the Far Right, whose reverence for life seems to be cut off at birth.

Being pro-life (Francis style) means working and voting for living wages for all, having a preferential option for the poor, half of whom are children, firmly rejecting the death penalty and militaristic obsessions, welcoming immigrants and refugees, fighting ecocide, and supporting unions. Families should be gardens where all those values flourish and grow.

Francis also recognizes that the world cannot withstand unlimited population growth; there are other earth-friendly ways of being fruitful. He even admits Catholics can learn much from the married clergy of other religions. (Clearly, their sexual behavior makes fewer sordid headlines.)

But Now to the Failings

Francis refers briefly to the right of conscience in the Catholic tradition. Unfortunately he does not apply that properly to some major issues in The Joy of Love: same sex marriage, remarriage after divorce, mercy death, contraception, and abortion. On those issues he is rule-bound and rigid, however couched it all is in calls for mercy.

Francis waxes rhapsodic on the beauty and personal enrichment offered by marriage and sexual cherishing in marriage. Marriage is the “ideal” human love. Marital love is love at its best, superior to the love of “friendship, filial devotion or devotion to a cause. And the reason is to be found precisely in its totality.”

“Unwillingness to make such a commitment is selfish, calculating and petty.” All this is true, says Francis, even for childless marriages.

And now the rub! This magnificent experience is reserved by God and the Catholic hierarchy only for heterosexuals. It’s beyond the reach of gays who love one another. The document should have been called The Joy of Heterosexual Love.

Is it that all LGBT persons are too “selfish, calculating and petty?” Are they so deficient in their humanity as to be incapable of this achievement of human love. Is the Pope suggesting in a new nasty way that all these persons are “queer” and “deviant.” Is that why heterosexuals have seven sacraments but gays only have six since marriage is beyond their reach? That is theologically queer. Do we see here the old brutal prejudice wrapped in the language of love, pastoral concern, and pity?

Marriage by definition is the paramount form of committed friendship between sexually attracted persons. There is nothing heterosexual-specific in that definition.

Francis quotes the Christian scripture that “everything created by God is good and nothing is to be rejected.” (1 Tim. 4:4) Does that not apply to those whom God has made gay?

The pope is wrong here. And he is cruel. He insults LGBT human beings who suffer enough in a heterosexist world. He says in the face of well-documented evidence that children cannot be well raised by same sex couple — there must be a  father and a mother — and thus he insults those children with same sex parents and demeans the families in which they are thriving.

More distressing yet are the fawning, uncritical comments on this document from theologians and bishops. If they see Peter as the first pope could they not join Paul who said of Peter “I opposed him to his face, because he was clearly in the wrong.” That’s called prophecy, not disloyalty.

Francis’ noble hesitancy to judge once expressed regarding homosexuality, abandoned him in this document. Inexplicably, Francis disinters Humanae Vitae, an ill-conceived encyclical that contributed greatly to the emptying of pews and the closing of church doors. Theologians and the sensus fidelium, (the experience-fed wisdom of the laity and one of the sources of truth in Catholic theology) have rejected this disastrous condemnation of contraceptives by Pope Paul VI.

Why would Francis trot this out again in a world where overpopulation affects every crisis on this planet!

Similarly, on abortion, Francis yields to the conservatives and declares it evil in every case.  Thus, in a swoop, he condemns, sight unseen, the millions of women who choose to terminate problem pregnancies, often brought on by the lack of contraceptive availability. In this harsh judgment, those women are either morally guilty or excused by ignorance of what they are doing. There is no gentle alterative in this arrogant and unnuanced judgment.

Francis tries to ease up a bit on the condemnation of those who remarry after divorce. They are not excommunicated; they may not be in mortal sin. Still, they are in an “irregular” union. (The rule thing again; regula is the Latin for rule.)

Their situation is linked to unflattering symbols of “lost sheep,” those who have lost their way, displayed human weakness, and who are in need of mercy as candidates for admission to the church seen as “a field hospital.” They are not absolved of “objective sin.”

Subjectively their weakness or lack of understanding could absolve them of subjective guilt, but they remain “irregular.” To say more than that would allegedly have “changed church teaching” and made many Synod fathers go ballistic. The pastoral door is opened to their going to Eucharistic communion but only inasmuch as they need it more than the regulars.

Catholicism has a splendid, but well hidden, theory of conscience. Francis alludes to it several times but doesn’t use it to scuttle the insensitive taboos. He quotes some of Thomas Aquinas’s teaching on rules where Thomas says the practical moral principles are good in pluribus, that is usually but in certain circumstances that good principle cannot meet the value needs of the situation.

Again, Aquinas: “Human actions are moral or immoral according to their circumstances.” In some circumstances divorce is the moral while not the easy choice.

A second Catholic treasure is called Probabilism, a theory developed largely by the Dominicans and Francis’s own Jesuit order. It is a theory that frees conscience from the weight of undue authoritarianism. It says that in debated moral issues (such as all the ones we are discussing) when there are good reasons with good authorities on both sides of the debate, you are free to decide and the more rigorous view is not to be imposed on you. It is a system of Catholic moral pluralism which is based on insight, not permission.

Some 30 years ago, I spoke to a Dignity group of Catholic gays. I explained Probabilism, reading from old Catholic moral theology books, and applied it to same sex unions. In the light of that, I said, “your loves are not only good they are holy and full of grace.”

A number of them were in tears. They loved the Church and did not want their deep love of another to separate them from it. I spoke of it also in a lecture at Trinity College Dublin around that same time, and applied it to contraception and remarriage after divorce.

I wondered how this was going over with my 400 Irish listeners. The first question, from a middle-aged woman, gave me the answer. She asked: “Why in God’s holy name were we not told this!” Why indeed?

I teach it in every class I teach at Marquette and students often have said: “I guess I could remain a Catholic. I had no idea there was such respect for my conscience.”

Pope Francis says: “individual conscience need to be better incorporated into the Church’s praxis.” He’s right. And the tools are there to do it.