Republicans are denouncing President Obama for not reacting to the Brussels terror attacks by dropping everything and rushing back to Washington, but ex-CIA analyst Paul R. Pillar says overreacting can be a bigger mistake.

Reactions in the United States to the terrorist attacks in Brussels have quickly fallen into a familiar pattern, seen after attacks last year in Paris and in similar form after earlier incidents.

There are commentaries about how sophisticated and far-reaching the responsible group must be. There is excoriation of relevant security services, this time being the Belgians’ turn. There is exploitation by politicians of the spike in public concern about terrorism, this time with presidential candidates calling for patrols of American neighborhoods identified by religion, when those same candidates are not calling for carpet bombing a foreign country. And there is discussion of the scary possibility of similar future attacks in the United States. 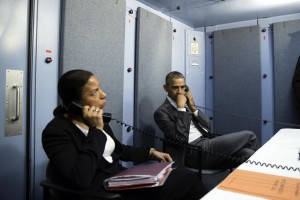 President Barack Obama and National Security Advisor Susan E. Rice talk on the phone with Homeland Security Advisor Lisa Monaco to receive an update on a terrorist attack in Brussels, Belgium. The President made the call from the residence of the U.S. Chief of Mission in Havana, Cuba, March 22, 2016. (Official White House Photo by Pete Souza)

There also is attention to what, if anything, the President of the United States should be doing in response to an incident of this sort. Another aspect of the familiar pattern is calls for him to do something. One of the presidential candidates called for him to cut short his Latin American trip, although how this would help to combat terrorism or to serve any other purpose was unclear. The President of the United States does not coordinate emergency responses in Belgium.

There also is, appropriately, attention to what the President says. This is appropriate not only because there needs to be a consistent and credible justification for anything that he does, but also because the American reactions are taking place in the realm of what is thought, said, and feared. What should a president tell his citizens about how to think about terrorism in general, or about this latest incident in particular?

Greg Jaffe in the Washington Post highlights the tension that President Obama is subjected to right now, between sticking to his best judgment regarding the best policies to pursue regarding ISIS and international terrorism, and bending to pressure to do something more or something different. Jaffe errs in saying that the political pressure to do something different is pitted against Mr. Obama’s “instincts” about the right way to deal with ISIS.

Everything we know about Mr. Obama’s decision-making style tells us that the policies at hand are the product not of instinct but of careful review by the President and his advisers of options, costs, benefits and risks. But there is indeed tension, and it involves what the President says as well as what else is done. Jaffe quotes Mr. Obama’s admission that “there are times where I have not been attentive enough to feelings and emotions and politics in communicating what we’re doing and how we’re doing it.”

There are times in any presidency when what the public needs most from its leader is an expression of shared ache, or anguish, or outrage, or disappointment. In such situations the nation needs eloquence on behalf of catharsis.

One such time was, for example, after the loss of the space shuttle Challenger and its crew in 1986, when President Reagan (and his speechwriters) captured perfectly the public pain and the words needed to salve the national wound. What the public wanted to hear was also what it needed to hear. That’s because there was not much to do other than the catharsis; there were not policy options in play that could be counterproductive or excessively costly.

At other times — and the aftermath of a terrorist attack is one of these times — what the public needs to hear is not what it most wants to hear. There are policy options in play that could be counterproductive or excessively costly. The public does not need from its leaders an eloquent way of expressing what it is already feeling. At least since 9/11, there has been no need for leaders to get the public more stirred up about terrorism than it already is and to convince the public that it needs to take the topic more seriously.

What is needed from a president instead it a correction or counterweight to thoughts and feelings and emotions that are excessive or misdirected. This means, specifically, keeping the threat of international terrorism in perspective, in the context of other threats to safety and security. Comparisons between deaths from terrorism and the more numerous ones from bathtub drownings and lightning strikes have been made often enough that the instructive point involved ought to be learned by now, but unfortunately it does not seem to have been.

The further point that succumbing to fear plays into the hands of terrorists has been made enough that it is almost a cliché, but again an important lesson is involved that the American public still does not seem to have absorbed sufficiently. Perspective also is needed for the threat posed specifically by ISIS — which has no foreign allies, has only a very narrow appeal, and has been losing ground where it had established its enclave in Iraq and Syria.

Also needed is a corrective to the very common notion that there is a direct relationship between the fortunes of that enclave and ISIS-related terrorist threats in the West. Although there is some validity to this notion in terms of visible success inspiring would-be recruits, what has been happening in recent months has involved more of an inverse relationship; terrorist attacks in the West are a not a sign of strength but probably more of a desperation move in response to setbacks for ISIS in the Middle East.

Needed in addition to all this is a lesson in how responses such as re-instituting torture, carpet bombing other countries, targeting security patrols at Muslim-inhabited neighborhoods in the United States, or some other things presidential candidates have been calling for will not help counterterrorism and are more likely to hurt it, in addition to posing significant moral or legal problems.

President Obama surely realizes all this, and many of the points involved are ones that he already has touched on in at least scattered form in the past. But he also surely is smart enough to realize that straightforward expression by him of such points will trigger more of the sort of negative spin for which he has often been a target and that would be liable to drown out his own messages.

Any efforts to put the terrorist threat into a realistic perspective would lead to accusations that Mr. Obama doesn’t “get it” when it comes to the seriousness of the terrorist problem. Any effort to explain the actual relationship between the ISIS enclave in the Middle East and the potential for ISIS-related terrorism in the West would trigger accusations that the President is subordinating everything to a personal fixation on not using military force. And any pointing out of ISIS’s actual setbacks would lead to accusations that the president is just trying to divert attention away from a failure to solve the ISIS problem and eliminate the threat.

So Mr. Obama is experiencing an additional sort of tension: between the need to steer the thinking of the American public constructively and the political dynamics that, through no fault of his own, would tend to negate any such effort at steering. In the meantime, the feelings and emotions and politics surrounding the terrorism issue will leave the American public with some serious misconceptions.

← US Intel Vets Warn Against Torture
Should Progressives Back Sanders? →