By traveling to Cuba and easing the embargo, President Obama signals reduced U.S. hostility but no apologies for the cruelty that Washington has inflicted on the Caribbean island for more than half a century, says William Blum.

The CIA’s motto might well be: “Proudly overthrowing the Cuban government since 1959.” Now what? Did you think that the United States had finally grown up and come to the realization that they could in fact share the same hemisphere as the people of Cuba, accepting Cuban society as unquestioningly as they do that of Canada?

The Washington Post (Feb. 18) reported: “In recent weeks, administration officials have made it clear Obama would travel to Cuba only if its government made additional concessions in the areas of human rights, Internet access and market liberalization.” 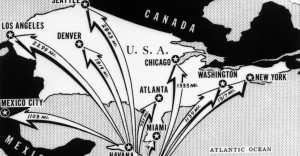 In October 1962, Americans were terrified over Soviet missiles in Cuba, as this newspaper map showing distances between Cuba and major North American cities demonstrates.

–Blowing up a passenger plane full of Cubans in 1976. (In 1983, the city of Miami held a day in honor of Orlando Bosch, one of the two masterminds behind this awful act; the other perpetrator, Luis Posada, was given lifetime protection in the same city.)

–Giving Cuban exiles, for their use, the virus which causes African swine fever, forcing the Cuban government to slaughter 500,000 pigs.

–Infecting Cuban turkeys with a virus which produces the fatal Newcastle disease, resulting in the deaths of 8,000 turkeys.

–In 1981 an epidemic of dengue hemorrhagic fever swept the island, the first major epidemic of DHF ever in the Americas. The United States had long been experimenting with using dengue fever as a weapon. Cuba asked the United States for a pesticide to eradicate the mosquito involved but was not given it. Over 300,000 cases were reported in Cuba with 158 fatalities.

These are but three examples of decades-long CIA chemical and biological warfare (CBW) against Cuba. [See William Blum, Rogue State: A Guide to the World’s Only Superpower (2005), chapter 14]

We must keep in mind that food is a human right (although the United States has repeatedly denied this).  [Ibid., p.264]

Washington maintained a blockade of goods and money entering Cuba that is still going strong, a blockade that President Clinton’s National Security Advisor, Sandy Berger, in 1997 called “the most pervasive sanctions ever imposed on a nation in the history of mankind.” [White House press briefing, Nov. 14, 1997, US Newswire transcript]

–In one scheme after another in recent years, Washington’s Agency for International Development (AID) endeavored to cause dissension in Cuba and/or stir up rebellion, the ultimate goal being regime change.

Needless to say, the United States has not paid a penny of this.

One of the most common Yankee criticisms of the state of human rights in Cuba has been the arrest of dissidents (although the great majority are quickly released). But many thousands of anti-war and other protesters have been arrested in the United States in recent years, as in every period in American history.

During the Occupy Movement, which began in 2011, more than 7,000 people were arrested in about the first year, many were beaten by police and mistreated while in custody, their street displays and libraries smashed to pieces; (the Occupy movement continued until 2014; thus, the figure of 7,000 is an understatement.) [Huffington Post, May 3, 2012]

Moreover, it must be kept in mind that whatever restrictions on civil liberties there may be in Cuba exist within a particular context: The most powerful nation in the history of the world is just 90 miles away and is sworn – vehemently and repeatedly sworn – to overthrowing the Cuban government. If the United States was simply and sincerely concerned with making Cuba a less restrictive society, Washington’s policy would be clear cut:

–Publicly and sincerely (if American leaders still remember what this word means) renounce their use of CBW and assassinations. And apologize.

–Cease the unceasing hypocritical propaganda – about elections, for example. (Yes, it’s true that Cuban elections never feature a Donald Trump or a Hillary Clinton, nor $10 billion, nor 24 hours of campaign ads, but is that any reason to write them off?)

–Pay compensation – a lot of it.

Throughout the period of the Cuban revolution, 1959 to the present, Latin America has witnessed a terrible parade of human rights violations – systematic, routine torture; legions of “disappeared” people; government-supported death squads picking off selected individuals; massacres en masse of peasants, students and other groups.

The worst perpetrators of these acts during this period have been the military and associated paramilitary squads of El Salvador, Guatemala, Brazil, Argentina, Chile, Colombia, Peru, Mexico, Uruguay, Haiti and Honduras. However, not even Cuba’s worst enemies have made serious charges against the Havana government for any of such violations; and if one further considers education and health care, “both of which,”said President Bill Clinton, “work better [in Cuba] than most other countries,” [Miami Herald, October 17, 1997, p.22A], and both of which are guaranteed by the United Nations “Universal Declaration of Human Rights” and the “European Convention for the Protection of Human Rights and Fundamental Freedoms,” then it would appear that during the more-than-half century of its revolution, Cuba has enjoyed one of the very best human-rights records in all of Latin America.

But never good enough for American leaders to ever touch upon in any way; the Bill Clinton quote being a rare exception indeed. It’s a tough decision to normalize relations with a country whose police force murders its own innocent civilians on almost a daily basis. But Cuba needs to do it. Maybe they can civilize the Americans a bit, or at least remind them that for more than a century they have been the leading torturers of the world.

← US Hypocritical Lectures to Cuba
Will We Miss President Obama? →

4 comments for “To Cuba with Hate”