Exclusive: Was Ronald Reagan a greater American leader than George Washington? That is the impression one gets when historic “Washington National Airport” is redubbed “Reagan National.” Are Americans really that anti-historical to have forgotten Washington’s significance, asks Robert Parry on the first President’s 284th birthday.

Arguably, George Washington was the one indispensible American. He was commander-in-chief during the American Revolution holding the embattled Continental Army together sometimes by his sheer force of will; at another key turning point, he presided at the Constitutional Convention giving the nation its governing framework; he then served as the first President placing his personal stamp of legitimacy on the fragile, young Republic.

While other Founders played important historical roles John Adams organizing the Revolution, James Madison devising the Constitution, Alexander Hamilton giving substance to the new federal government, etc. it was Washington whose temperament and stature made the entire experiment work. 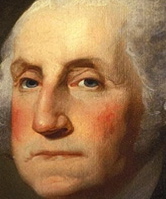 President George Washington, who warned against the dangers of a large military and an aggressive foreign policy to the Republic.

Later, other American leaders stepped forward to guide the nation through grave crises, such as Abraham Lincoln in the Civil War and Franklin Roosevelt during the Great Depression and World War II, but Washington was truly the Father of the Country giving the nation life on battlefields up and down the length of the Thirteen Colonies, inside the contentious Constitutional Convention in Philadelphia, and in the establishment of a truly unified nation by serving two terms as the first President.

Surely, Washington was not a person without flaws and contradictions, but without him it is hard to imagine what would have happened to the American colonies in the late 1770s or assuming that independence was won to the squabbling states under the ineffectual Articles of Confederation in the 1780s.

At every key turning point in those early years, Washington was there sacrificing for the new nation. He suffered with his troops at Valley Forge; he collaborated with Madison and Hamilton overcoming the national disunion that followed military victory; he agreed to leave his beloved Mount Vernon to serve as the first U.S. President of the United States but then retired after two terms showing that no one person was bigger than “We the People” enshrined in the Constitution’s Preamble.

So, it is fitting that Americans honor this great early leader of the American Republic. But what is odd and to me troubling is the ahistorical attitude that essentially expunges Washington’s name from what had been “Washington National Airport” to rename it, in effect, “Reagan National” or simply “Reagan.”

Whatever one thinks of Ronald Reagan and I rate him one of America’s worst presidents for his profligate fiscal policies, his excessive militarism, his atrocious actions on human rights and his contempt for the Constitution as demonstrated by the Iran-Contra scandal it is hard to believe that even dyed-in-the-wool Republicans and conservatives would rate Reagan as a greater president than George Washington.

Yet, since Reagan’s name was shoehorned into the airport’s title after Republicans seized control of Congress in 1995 a change signed into law by Democratic President Bill Clinton many U.S. airlines have dropped Washington’s name altogether when referring to what had long been “Washington National Airport.” It’s now referred to commonly as “Reagan National” or “Reagan.”

Beyond the bizarre suggestion that Ronald Reagan was a more important historical figure than George Washington, there is the practical concern that many people visiting Washington D.C. find it confusing that its airport, which was once named after Washington (who incidentally lived close by at Mount Vernon), is now identified as “Reagan,” who spent most of his adult life in California and only lived in Washington during his time in the White House (and then only when he wasn’t vacationing back in California).

So, doesn’t it make more sense both historically and practically to again refer to National Airport as “Washington National”? And, even if it is currently politically impossible to restore the traditional name given how the reversion would infuriate many Republicans can’t we, as a flying public, demand that the airlines go back to combining Washington and National rather than demeaning America’s Founding Father by dropping him in favor of Ronald Reagan? 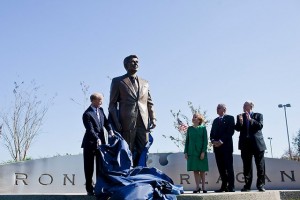 Ronald Reagan statue at Washington National Airport, which was renamed in his honor as his scandals were excused and suppressed.

I know my suggestion may be deemed petty by some and quixotic by others, but there is meaning in historical symbolism. That is, after all, why Republicans insisted on elbowing Washington aside in the first place and elevating their recent hero Reagan to such an august position.

But are Americans so historically ignorant that we actually believe that Ronald Reagan was a more important figure in our national existence than George Washington? Do Americans really not know or appreciate how the Republic was created? Are the heroic sacrifices of Washington and his Continental Army so forgotten and disrespected that an actor-turned-politician is given top billing? Do conservatives who call themselves “constitutionalists” have so little regard for Washington and others who crafted the actual Constitution that they relegate them to a subordinate position? Have Republicans forgotten how the Republic got started and who started it?

Really! Regardless of our political persuasions, don’t we care enough about America’s Founders and America’s Founding to tell the commercial airline companies that it’s not “Reagan National,” it’s “Washington National”!

← The GOP’s ‘Pitchfork’ Rebellion
Sanders the ‘Realist’; Hillary the ‘Neocon’ →