Americans perceive what has happened to their democratic Republic only dimly, tricked by rightists who call all collective government actions bad and by neoliberals who make “markets” a new-age god. But ex-congressional budget official Mike Lofgren shows how this “Deep State” really works, writes Chuck Spinney.

Just about everyone knows something is dangerously wrong with our nation’s political system. There is a growing awareness that the United States is drifting blindly into a state of greater inequality, stagnation, oligarchy and perpetual war, with a ruling establishment that neither responds to the will of the people nor to the problems our nation faces.

For evidence of this pervasive sense of unease, look no further than the 2016 presidential election, where a bombastic celebrity billionaire and a crusty grandfatherly democratic socialist are claiming the political system is rigged and are driving the scions of the status quo into the rubber room — at least for now. 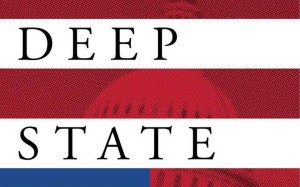 In his most recent book, The Deep State, Mike Lofgren has written a timely exegesis of that status quo and its staying power. He makes it easier for any concerned citizen to understand the realities of the political and constitutional crises now facing the United States — and perhaps even improve the reader’s sense for the madness and anger that now characterizes 2016 presidential election.

Before reading further, be advised, I am biased: the author, Mike Lofgren, is a long-time colleague and close friend. Lofgren worked on Capitol Hill while I worked in the Pentagon. Over the years, beginning in the late 1980s, we discussed and tried to understand the many hidden connections that had evolved insensibly over time to disconnect the money-siphoning operations of the Military-Industrial-Congressional Complex from the system of checks and balances designed by the Framers of the Constitution.

Lofgren’s book goes much further. It grew out of a stunning essay “Anatomy of the Deep State” (February 2014), that Lofgren produced at the request of journalist Bill Moyers. Lofgren has written a tour de force that takes the reader on a wild ride through a swamp of confusion and disorder that reeks of corruption. His writing is at once witty and particular, but also general and prescriptive.

Making sense out of that mix is no mean feat. To be sure, the story Lofgren weaves is complex, and at times overwhelming and disgusting, but anyone can understand it, if one takes the time to read and think about what Lofgren is saying.

Lofgren’s analysis centers on how the looting operations of three mutually reinforcing “pillars” (my word) of the contemporary American Deep State evolved over time. These “pillars” are themselves self-organizing groupings of coincident interests that work to insensibly co-opt and exploit the fissures in the mechanistic distribution of power designed into the Constitution by James Madison.

These emergent groupings form what some essayists have called an “iron triangle” of capitalists in the private sector and professional bureaucrats as well as elected officials in the legislative and executive branches of government, as well as in the menageries inhabited by hangers on, wannabees, journalists, and parasites feeding off the triangular host.

These triangles are energized by money flows and influence peddling, and their operations are lubricated by a maze of revolving doors that enable the individual players to climb the greasy pole to power and riches by moving freely back and forth from one corner to another, all the while pumping the money and propaganda needed by the triangle to survive and grow , on its own terms!

Lofgren’s discussion of the career trajectory and policy actions of Robert Rubin, President Clinton’s Secretary of the Treasury, is a particularly illuminating, if extreme, example of how an adept player games the triangle to accrete fabulous riches and oligarchical power.

Figure 1 is my simplified schematic outlining the basic features of an iron triangle. 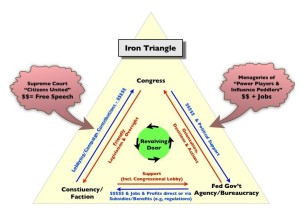 Lofgren’s analysis takes us around three triangles by examining the maze of living relationships making up (1) the triangular money pumping operations of the Military-Industrial-Congressional Complex, as well as the more subtle looting and power grabbing operations of (2) the de-regulating scams of Big Finance and (3) the big-brother spying operations of the pseudo-libertarian hyper-capitalists of Silicon Valley.

To be sure, there are many other iron triangles that Lofgren does not discuss in great detail (e.g., Big Pharma, Big AG and the food supply, etc.), but his story is clear enough and sufficiently broad enough to make the larger argument.

But there is more. Lofgren explains how the more obvious idea of an iron triangle is only the inner core of a far-reaching web of interests. This web includes, inter alia, the machinations of lobbyists, think tanks, political action committees (PACs), universities, pseudo intellectuals and ideologues, establishment promoting pundits in the fourth estate, tax deductible foundations, and behind them, the deep pockets of the secretive billionaire oligarchs, who have had their influence unleashed by the recent decisions of the Supreme Court.

The blood giving life to the inner and outer aspects of this pulsating web of non-democratic power and influence is MONEY, which the Supreme Court in its Citizens United Decision legitimated as a form of free speech protected by the First Amendment.

To Lofgren’s argument, I would add the accumulating result of America’s insensible descent into the Deep State is a work in progress. I also argue that this work is being been accompanied by a gradual emergence of  a peculiarly American amalgam of fascist, corporatist and neoliberal organizational ideologies. This amalgam is evolving into “winner take all” political economy that subordinates citizens and workers and the state to growing oligarchical powers in the private sector.

Figure 2 is a kind of thought experiment I designed to explore the ramifications of this possibility. It lists some of the political and economic features of the fascist, corporatist and laissez-faire (aka neoliberal) ideologies. To be sure, these are murky features, especially in the case of those relating to fascism, but I think most objective readers would agree that the features outlined in Figure 2 are very prominent in each of these forms of political-economic organization. The experiment is to ask yourself if the emergent American political economy exhibits hints of these features. The boxes checked in red are my affirmative answers to these questions. 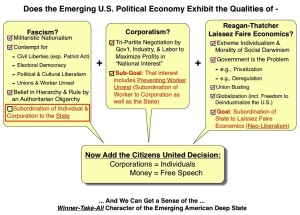 While Lofgren does not say so, I would argue there are growing signs that the emerging American political economy combines many elements of classical fascism and corporatism with neoliberal laissez-faire economics into something that is new and peculiarly American, a political economy that exhibits fascist tendencies, but unlike classical fascism, subordinates the state to neoliberal corporatist interests, while it exploits many of fascism’s authoritarian organizing principles to stabilize the emerging status quo.

Don’t take my word for it. Read Lofgren’s book, then think about how you would check or redefine the boxes in Figure 2 and draw your own conclusions.

One of the most important aspects of Lofgren’s analysis, at least to my thinking, lies in his frequent reminders that the structural aspects of this current state of affairs are not the results of a centrally guided conspiracy hashed out in a smoke-filled room. The “structure” of the contemporary American Deep State is more an emergent property triggered by the incremental give-and-take by thousands of players, whose successes and failures are conditioned by an interplay of chance and necessity, in what is really a cultural evolution.

To be sure, there are lots of smoke-filled rooms conspiring invisibly to play this game of chance and necessity, but they are competing with each other as well as cooperating — and it is the evolutionary character of the Deep State that enables it to survive, adapt and grow on its own terms, and that emergent character is what makes the Deep State so dangerously resistant to change.

Chuck Spinney is a former military analyst for the Pentagon who was famous for the “Spinney Report,” which criticized the Pentagon’s wasteful pursuit of costly and complex weapons systems.