Since Ronald Reagan, the Republicans have rallied many Americans around the notion that “government is the problem.” And, despite disasters for the middle and working classes, right-wing intellectuals like Charles Krauthammer continue to sell the same message, as Lawrence Davidson describes.

Charles Krauthammer is the most celebrated contemporary conservative thinker in the United States. But let it be known that he is not just a theorist. He is man of political action who wants a conservative in the White House to line up with those already in control of Congress.

He wants to win. Thus he supports Republican candidates such Marco Rubio and Chris Christie (Ted Cruz, while a “genuine conservative,” is too “radical,” and Jeb Bush isn’t mentioned at all) as potential presidents who “would give conservatism its best opportunity since Reagan to become the country’s governing philosophy.” Those are the words of an unapologetic ideologue: what is good for the country is the Krauthammer philosophy of conservatism in control of the government. 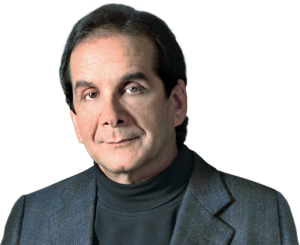 What does this mean? For Krauthammer, as for so many other conservative thinkers who have never really evolved away from Nineteenth Century capitalist economic theory, conservatism in power means the “reform” of big government, or as he still describes it, “the Twentieth Century welfare state.” Reform essentially means significant downsizing of government in the name of individual “freedom,” primarily in the marketplace, and, of course, a corresponding cut in taxes for the business class.

There are several things dangerously wrong about Krauthammer’s simplistic approach to “conservative governing.” One is that, in a country like the U.S. with approximately 320 million people (a considerable number of them getting steadily poorer), doing away with welfare state services and regulations seriously risks further impoverishment, increased economic exploitation in the workplace, an erosion of state and local infrastructures, and an explosion in business corruption.

While Krauthammer would never agree, it is simply historically untrue that capitalism, without widespread government regulation and significant financial support for basic services, has ever brought prosperity to the majority of any population.

The second thing wrong with Krauthammer’s thinking is his apparent inability to understand the difference between inefficiency and government size. Big government is necessary for the social and economic health of big societies. But increased size does not automatically translate into government inefficiency.

The need to monitor the efficiency of all bureaucracies so that they perform their jobs in a smooth and timely fashion is one thing. Downsizing to the point of near dismantlement of necessary government bureaus based on the conservative ideological assumption that they are chronically inefficient and overly expensive dead weight is quite another. The former will make things better. The latter will risk societal collapse.

Nonetheless, it is this downsizing “reform” of the welfare state that Krauthammer tells us is the answer to the “deep anxiety stemming from the secular (sic) stagnation of wages and living standards that has squeezed the middle and working classes for a generation.” He juxtaposes this ideologically dictated answer against those he believes come from Donald Trump and Bernie Sanders.

The former offers “ethnonationalist populism.” Krauthammer tells us what is already obvious, that Trump blames the nation’s problems “on foreigners, most prominently those cunning Mexicans, Chinese, Japanese, and Saudis who have been taking merciless advantage of us.” (How anyone can put the Mexicans in with the Saudis is beyond me.)

However, while debunking Trump’s xenophobia, Krauthammer fails to mention that it is those conservative ideologues of his own camp who have pushed hardest for the sort of free trade agreements that have allowed Donald Trump to focus on outsiders.

Then there is the phenomenon of Bernie Sanders. As far as Krauthammer’s understanding goes, Sanders is preaching socialism, and the apparent positive response to this baffles him.

“It is hard to believe that the U.S., having resisted the siren song of socialism during its entire 20th century heyday should suddenly succumb to its charms a decade after its intellectual demise,” Krauthammer writes.

Only from behind the walls of Krauthammer’s conservative ideology can socialism be considered “intellectually dead.” It is certainly alive and politically competitive in western and northern Europe.

Of course, despite Krauthammer’s failure to make the distinction, Sanders is nowhere near the kind of socialist found in the Soviet bloc during the Cold War. In truth Sanders is closer to the prevailing social democrats of Western Europe or even the liberal wing of the Democratic Party prior to the coming to power of the Bill Clinton crowd.

And, it can be argued, the success of Sanders’s message is in direct proportion to the failure of Krauthammer’s conservatism to bring lasting economic prosperity and secure social services to the people of the United States. Nonetheless, Krauthammer cannot see this relationship. For him, Sanders’s ultimate success is unimaginable.

“The Dems would be risking a November electoral disaster of historic dimensions” if they nominated Sanders, he says. Actually this might be so, but not because of any real socialist program on Sanders’s part. Rather, disaster would be the product of relentless Republican red-baiting, to the point that the reality of Sanders’s policy proposals becomes irrelevant. Indeed, Krauthammer’s characterization of Sanders may well be the first shot in such a red-baiting campaign.

Charles Krauthammer’s conservative ideological outlook is every bit as destructive as Trump’s “ethnonationalist populism.” The reality is that Krauthammer’s conservatism has been the guiding light of the U.S. economy since its inception and produced a history of continual booms and busts, the latter coming as ever deeper and prolonged depressions.

This went on throughout the late Eighteenth and Nineteenth and into the Twentieth Century, culminating in the Great Depression of 1929. So disastrous was that crash, along with the fact of competition from the young Soviet Union, that there was finally some soul-searching on the part of the smarter capitalists, who then made the effort to rationalize their system.

In the U.S., this came in the form of Franklin Roosevelt’s New Deal. Roosevelt brought the necessary regulation and government expansion to semi-stabilize the economy and bring a modicum of security to the common citizen. Depressions were held down to periodic recessions while Social Security, unemployment insurance and other commonsense social programs made their debut.

It is a mark of the ahistorical nature of their ideological worldview that Krauthammer conservatives have been complaining about big government ever since, while apparently forgetting all about capitalism’s original sins. Just to juice up their argument, they throw in talk of “individual freedom” in the marketplace while disparaging other freedoms and rights, such as those relating to healthcare, education, equal opportunity, and gender equality and the like as if they were not part of the mix that should make up a modern civilization.

There is something truly inhumane in the Krauthammer perspective. But that does not mean that those politicians such as Marco Rubio and Chris Christie who espouse such bankrupt ideas are incapable of winning local, state and national elections. Never underestimate the ignorance and gullibility of conservative-minded voters.

For them there will always be the siren song of a Charles Krauthammer. One is reminded of the description of a British conservative politician given by the English philosopher Gilbert Ryle, one that fits America’s celebrated conservative thinker pretty well: “He stood like a light out to sea, firmly beckoning ships on to the rocks.”

← Ted Cruz’s Religious Play
The Meaning Behind the Sanders Surge →