Official Washington hails Robert Gates as one of its Wise Men and the former CIA director and defense secretary clearly concurs as he shows in his new book but the reality is far less complimentary, as ex-CIA analyst Melvin A. Goodman describes.

Former CIA Director and Defense Secretary Robert M. Gates, who served both Bush administrations as well as the Obama administration, has produced his third self-aggrandizing memoir. His most recent effort, A Passion for Leadership, is in the form of lessons learned, but there is no acknowledgement of any flaw or stumble, let alone mistake.

Gates writes, “A leader, or those who aspire to that role, regardless of whether in the public or the private sector, must have integrity.” Yet, in view of Gates’ emphasis on “integrity,” it’s useful to review his CIA career, particularly his relationship with CIA Director William Casey. 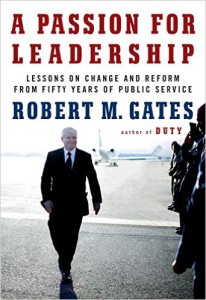 First, there is virtually no discussion of the fact that President Ronald Reagan nominated Gates to be the director of central intelligence in 1987, but his duplicity on the Iran-Contra scandal meant he could not be confirmed. After his appearance before the Senate Intelligence Committee, Sen. David Boren, the chairman of the committee, called Gates at home to report that too many members of the committee simply didn’t believe his denials of prior knowledge of the illegal Iran-Contra covert action (which involved secretly selling weapons to Iran with some proceeds going to the Nicaraguan Contra rebels).

Sen. Boren even called Lawrence Walsh, the independent counsel investigating Iran-Contra, to ascertain whether Gates would be indicted. Walsh “doubted Gates’ veracity,” but said he would “probably not” be indicted. Walsh warned Boren, however, that there were still troubling areas indicating that Gates falsely denied knowledge of Colonel Oliver North’s Contra-support activities. North was Bill Casey’s “case officer” for Iran-Contra.

Walsh knew that Gates had been informed of the illegal “arms-for-profit deal,” but Gates continues to claim that he had been “kept in the dark” and doesn’t remember any conversations that gave him advance knowledge. Walsh’s report included ten pages on Gates, concluding that there was “insufficient evidence” to warrant charging Robert Gates with a crime. But the report noted that the “statements of Gates often seemed scripted and less than candid.”

A veteran CIA operative, Tom Polgar, wrote many members of the committee to remind them about Gates’ role in Iran-Contra, and the “slanting of intelligence under the leadership of Casey and Gates.” Nevertheless, Gates still pretends to be an innocent bystander in the Iran-Contra crisis, although he was on center stage at an important decision-making juncture.

In his book, Gates contends that he “was no lawyer and didn’t even know if laws had been broken.” It was well known at the CIA that the sale of surface-to-air missiles to Iran was a violation of congressional law and that, in any event, the profits of covert sales had to be turned back to the U.S. Treasury.

Actually, Gates played a key role in developing a national intelligence estimate in 1985 that provided the intelligence justification for selling arms to Iran, and referred to the congressional investigations of Iran-Contra as “bureaucratic bullshit” that Casey was determined to evade.

Three decades later, Gates acknowledges that Casey “orchestrated” Iran-Contra “in league with the national security adviser.” During the hearings in 1991 and in his first memoir in 1996, Gates defended Casey throughout.

Even worse, Gates makes no mention of the fact that his confirmation as CIA director in 1991, when he was nominated for a second time, produced the most contentious and tumultuous vote on an intelligence official in the agency’s history. Gates dismissed the committee hearings as a “food fight,” but more than 30 senators voted against Gates, which was far greater than all votes for all previous directors.

In his memoir, Gates takes credit for his “self-discipline” in front of senators who “love to hear themselves talk,” and for “keeping silent in the face of outrageous speeches.” He goes on the attack only against the late Sen. Howard Metzenbaum, who not only voted against Gates, but read into the congressional record some of the more than 50 statements from CIA analysts who opposed Gates’s confirmation.

“The analytic product improved substantially” during my “four years” as deputy director of intelligence,” says Gates in 2016. This may be the most ludicrous aspect of Gates’s memoir.

As Senator Bill Bradley remarked in explaining his vote against Gates, the director of intelligence was wrong about every major intelligence issue that marked the 1980s and President Reagan’s two terms in office.

Former CIA Director Stansfield Turner wrote in Foreign Affairs that the “corporate view” of the CIA under Gates “missed by a mile” and that the United States should not “gloss over the enormity of this failure to forecast the magnitude of the Soviet crisis.”

There is no mention of Secretary of State George Shultz in the Gates’ memoir, presumably because Shultz’s memoir charged Gates with “manipulating” him and being “usually wrong” about the Soviet Union. The former secretary of state emphasized that he had been “misled, lied to, and cut out” by Casey and Gates.

I would only add that Gates was entirely wrong about Moscow and Soviet President Mikhail Gorbachev, and he made sure that the CIA was wrong as well.

Two years after Shultz told Gates that “you have a big, powerful machine not under good control” and “I distrust what comes out of it,” Secretary of State James Baker had his own confrontation with Gates. Gates was giving speeches that undermined Baker’s policies, and the secretary threatened to go to President George H.W. Bush to stop Gates’s efforts.

National security adviser Brent Scowcroft got the message and turned off Gates’s polemics. Like Shultz, Baker is not mentioned in the memoir.

“At every level, a leader should strive to make his employees proud to be where they are and doing what they do,” says Gates in 2016.

In my 24 years at the CIA, there was never the kind of toxic atmosphere that existed when Gates served as deputy director for intelligence, deputy director of CIA, and finally director of CIA. Several Republican senators who supported Gates, including Warren Rudman and Intelligence Committee vice chairman Frank Murkowski, acknowledged Gates’s imperious manner in their statements.

Chairman Boren believed he had to make a personal commitment and “indeed the commitment of our entire committee” that “no action will be taken against [Gates’s critics] in a way that will disrupt or penalize their career advancement.”

Boren said he would hold Gates “accountable and carefully scrutinize his decisions and actions to ensure that needed changes are made.” Boren had no ability whatsoever to enforce such a commitment, and his colleagues on both sides of the aisle were nonplussed and chagrined that their chairman had gone out on the limb with a feckless gesture. Accordingly, nothing was done when some of Gates’s critics suffered professionally as a result of their sworn affidavits, including vindictive polygraph examinations.

Perhaps if the Senate had done its job in 1991 and rejected the Gates’s nomination as it was prepared to do in 1987 and if the Senate Intelligence Committee had pursued the warnings it received regarding politicization, then perhaps it would have been more difficult to politicize intelligence in the run-up to the Iraq War a decade later.

The Senate Intelligence Committee gave the benefit of the doubt to Bob Gates when it should have given the benefit to his critics. Unfortunately, there is no indication in A Passion for Leadership that Gates has learned any lessons from any of this.

Melvin A. Goodman is a senior fellow at the Center for International Policy and a professor of government at Johns Hopkins University.  A former CIA analyst, Goodman is the author of Failure of Intelligence: The Decline and Fall of the CIA, National Insecurity: The Cost of American Militarism,” and the forthcoming The Path to Dissent: A Whistleblower at CIA (City Lights Publishers, 2015).  Goodman is the national security columnist for counterpunch.org.

10 comments for “The Reality of Robert Gates”