On Jan. 28, 30 life-size cutouts of the late anti-war activist Jerry Berrigan brother of Dan and Phil Berrigan blockaded the main entrance of Hancock Air National Guard Base outside Syracuse, New York, where Jerry Berrigan lived. The cutouts of Jerry Berrigan were accompanied by 12 live nonviolent drone resisters, who were arrested after blockading for an hour and a half.

Jerry Berrigan, who died on July 26, 2015 at the age of 95, dedicated his life as did his brothers Dan and Phil Berrigan to Jesus’s command to love one another. Jerry Berrigan came to the base on a bi-weekly basis whenever he was able, in his words, “to remind the base commander of our government’s pledge under the Fourth Geneva Convention of 1949, a treaty to safeguard non-combatant’s well-being in any warzone in which U.S. forces are engaged in combat.” 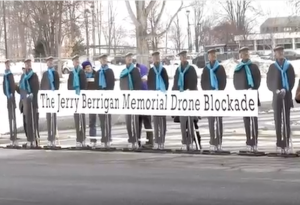 Berrigan also sought “to register horror and indignation at reports of bombing missions by drones in Afghanistan and Pakistan which resulted in the deaths of many innocent civilians; men, women and children.”

Those arrested and jailed for standing with the Memorial were Beth Adams, Bev Rice, Bill Ofenloch, Brian Hynes, Charley Bowman, Ed Kinane, James Ricks, Joan Pleune, Joan Wages, Pete Perry, Steve Baggarly, and Ray McGovern. They were all charged with one misdemeanor and two violations, with the exception of Bev Rice and Joan Pleune, who were both charged with an additional misdemeanor (for allegedly violating an order of protection taken out by the base commander).

In 2008, Jerry Berrigan was asked if there was anything he would change in his life. Jerry replied, “I would have resisted more often and been arrested more often.” The activists brought his image to the gates to remember that this is where he would be, speaking out and putting his body on the line to say a clear “NO” to killing. His widow was among the supporters on Thursday.

The group also remembered Mary Anne Grady Flores, who is serving a six-month sentence for violating an order of protection, taken out by the colonel at Hancock Air Base. As the protesters noted, courts in rural New York apparently believe that a colonel at this highly armed base needs protection from nonviolent citizens calling attention to the drone killings.

Evidence mounts regarding the illegality of U.S. drone policies, from the “Drone Papers” published by The Intercept, to the four drone pilots who have come forward to speak out about what this policy is doing. [See also, http://www.democracynow.org/2015/11/20/numbing_horrible_former_drone_operator_brandon.]

Americans dependent on the New York Times and other mainstream media outlets know next to nothing about the drone killings, much less those who believe them to be crimes, the protesters noted.

The activists tried to deliver a letter addressed to the Hancock military personnel, stating “Under the U.S. Uniform Code of Military Justice you must not be complicit in these crimes against peace, crimes against humanity and war crimes. In fact, you are required to disobey unlawful orders from a superior.”