Exclusive: Saudi Arabia likes to distinguish itself from the head-choppers of the Islamic State but the recent mass executions, including decapitating a top Shiite dissident, reveals the Saudi royals to be just better-dressed jihadists, while creating an opening for a U.S. realignment in the Mideast, says Robert Parry.

For generations, U.S. officials have averted their eyes from Saudi Arabia’s grotesque monarchy which oppresses women, spreads jihadism and slaughters dissidents in a crude trade-off of Saudi oil for American weapons and U.S. security guarantees. It is a deal with the devil that may finally be coming due.

The increasingly undeniable reality is that the Saudis along with other oil sheikhs are the biggest backers of Al Qaeda and various terrorist groups helping these killers as long as they spread their mayhem in other countries and not bother the spoiled playboys of the Persian Gulf. 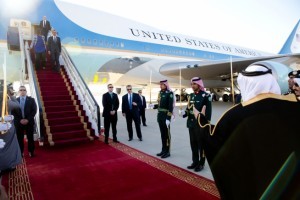 President and Mrs. Obama disembark from Air Force One at King Khalid International Airport in Riyadh on Jan. 27, 2015, for a state visit to Saudi Arabia. (Official White House Photo by Pete Souza)

President George W. Bush and then President Barack Obama may have suppressed the 28 pages of the congressional 9/11 report describing Saudi support for Al Qaeda and its hijackers but the cat is thoroughly out of the bag. Mealy-mouthed comments from the State Department spokesmen can no longer hide the grim truth that U.S. “allies” are really civilization’s enemies.

The big question that remains, however, is: Will Official Washington’s dominant neocon/liberal-interventionist claque continue to protect the Saudis who have built a regional alliance of convenience with Israel over their shared hatred of Iran?

Inside Official Washington’s bubble where the neocons and liberal hawks hold sway there is a determination to make the “designated villains,” the Iranians, the Syrian government, Lebanon’s Hezbollah and the Russians. This list of “villains” matches up quite well with Israeli and Saudi interests and thus endless demonization of these “villains” remains the order of the day.

But the Saudis and indeed the Israelis are showing what they’re really made of. Israel has removed its humanistic mask as it ruthlessly suppresses Palestinians and mounts periodic “grass mowing” operations, using high-tech munitions to slaughter thousands of nearly defenseless people in Gaza and the West Bank while no longer even pretending to want a peaceful resolution of the long-simmering conflict. Israel’s choice now seems to be apartheid or genocide.

Meanwhile, the Saudis though long-hailed in Official Washington as “moderates” are showing what a farcical description that has always been as the royals now supply U.S.-made TOW missiles and other sophisticated weapons to Sunni jihadists in Syria, fighting alongside Al Qaeda’s Nusra Front.

Using advanced U.S.-supplied warplanes, the Saudis also have been pulverizing poverty-stricken Yemen after exaggerating the level of Iranian support to the Houthis, who have been fighting both a Saudi-backed regime and Al Qaeda’s Yemeni affiliate. Amid the Saudi-inflicted humanitarian crisis, Al Qaeda’s forces have expanded their territory.

And, at the start of the New Year, the Saudi monarchy butchered 47 prisoners, including prominent Shiite cleric Nimr al-Nimr for his offense of criticizing the royals, or as the Saudis like to say without a touch of irony supporting “terrorism.” By chopping off Nimr’s head as well as shooting and decapitating the others the Saudis demonstrated that there is very little qualitative difference between them and the head-choppers of the Islamic State.

Yes, the usual suspects in Official Washington have sought to muddle the blood-soaked picture by condemning angry Iranian protesters for ransacking the Saudi embassy in Tehran before the government security forces intervened. And there will surely be an escalation of condemnations of anyone who suggests normalizing relations with Iran.

But the issue for the neocons and their liberal-interventionist sidekicks is whether they can continue to spin obviously false narratives about the nobility of these Middle East “allies,” including Israel. Is there a limit to what they can put over on the American people? At some point, will they risk losing whatever shreds of credibility that they still have? Or perhaps the calculation will be that public credibility is irrelevant, power and control are everything.

A similar choice must be made by politicians, including those running for the White House.

Some Republican candidates, most notably Sen. Marco Rubio, have gone all-in with the neocons, hoping to secure largesse from casino tycoon Sheldon Adelson and other staunch supporters of Israel’s right-wing Prime Minister Benjamin Netanyahu. On the other hand, real-estate magnate Donald Trump has distanced himself from neocon orthodoxy, even welcoming Russia’s entry into the Syrian conflict to fight the Islamic State, heresy in Official Washington.

On the Democratic side, former Secretary of State Hillary Clinton is the most closely associated with the neocons and the liberal hawks and she has dug in on the issue of their beloved “regime change” strategy, which she insists must be applied to Syria.

She appears to have learned nothing from her misguided support for the Iraq War, nor from her participation in overthrowing Muammar Gaddafi’s secular regime in Libya, both of which created vacuums that the Islamic State and other extremists filled. (British special forces are being deployed to Libya as part of an offensive to reclaim Libyan oil fields from the Islamic State.)

The Saudi decision to chop off Sheikh Nimr’s head and slaughter 46 other people in one mass execution also puts Sen. Bernie Sanders on the spot over his glib call for the Saudis “to get their hands dirty” and intervene militarily across the region.

That may have been a clever talking point, calling on the rich Saudis to put some skin in the game, but it missed the point that even before the Nimr execution the Saudis’ hands were very dirty, indeed covered in blood.

For Sanders to see the Saudis as part of the solution to the Mideast chaos ignores the reality that they are a big part of the problem. Not only has Saudi Arabia funded the extreme, fundamentalist Wahhabi version of Sunni Islam building mosques and schools around the Muslim world but Al Qaeda and many other jihadist groups are, in essence, Saudi paramilitary forces dispatched to undermine governments on Riyadh’s hit list.

That has been the case since the 1980s when the Saudis along with the Reagan administration  invested billions of dollars in support of the brutal mujahedeen in Afghanistan with the goal of overthrowing a secular, Soviet-backed government in Kabul.

Though the “regime change” worked the secular leader Najibullah was castrated and his body hung from a light pole in Kabul the eventual outcome was the emergence of the Taliban and Al Qaeda, led by a Saudi scion, Osama bin Laden.

Though Sanders has resisted articulating a detailed foreign policy instead seeking to turn questions back to his preferred topic of income inequality the latest Saudi barbarism gives him a new chance to distinguish himself from front-runner Clinton. He could show courage and call for a realignment based on reality, not propaganda.

President Obama, too, has a final chance to refashion the outdated and counter-productive U.S. alliances in the Middle East. At least he could rebalance them to allow a pragmatic relationship with Iran and Russia to stabilize Syria and neutralize the Saudi-backed jihadists.

Standing Up, Not Bowing Down

Instead of being supplicants to Saudi riches and oil, the West could apply stern measures against the Saudi royals to compel their acquiescence to a real anti-terrorist coalition. If they don’t comply immediately, their assets could be frozen and seized; they could be barred from foreign travel; they could be isolated until they agreed to behave in a civilized manner, including setting aside ancient animosities between Sunni and Shiite Islam.

It seems the European public is beginning to move in this direction, in part, because the Saudi-led destabilization of Syria has dumped millions of desperate refugees on the European Union’s doorstep. If a new course isn’t taken, the E.U. itself might split apart.

But the power of the neocon/liberal-hawk establishment in Official Washington remains strong and has prevented the American people from achieving anything close to a full understanding of what is going on in the Middle East.

The ultimate barrier to an informed U.S. public may also be the enormous power of the Israel Lobby, which operates what amounts to a blacklist against anyone who dares criticize Israeli behavior and harbors hopes of ever holding a confirmable government position or for that matter a prominent job in the mainstream media.

It would be a test of true political courage and patriotism for some major politician or prominent pundit to finally take on these intimidating forces. That likely won’t happen, but Saudi Arabia’s latest head-choppings have created the possibility, finally, for a game-changing realignment.

← Failed US Sanctions on Russia
Reality Peeks Through in Ukraine →