It is depressing to witness the ongoing vitriolic voices of vituperation spewing out over the airwaves these days in what passes as “political debate,” especially in Republican circles. Depressing also to know that we still have nearly a year more to go of this same political circus of infotainment whose chief purpose really is to distract the public from the deeper, darker and more pressing issues that affect the nation and beg urgent discussion.

So history sometimes helps us put these things in a little perspective. A fine article from the New York Times a few days ago, “Anger: An American History”, provides some taste of the raucous history of prejudice, paranoia, fear and anger that seems perhaps always to have been part of the American political and social scene. 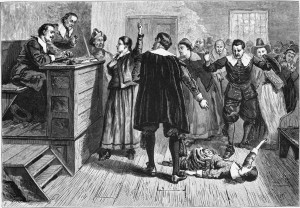 A drawing of the Salem “witch trials,” with the central figure believed to be Mary Walcott.

It’s unsettling in one sense, you can’t help but wonder if there’s any progress to be perceived over several hundred years. But yet there is progress of a kind. And in another sense it reminds us that things right now are not uniquely bad, and that perhaps much of this simply has to do with the human condition.

And of course no country is without its prejudice, racism, paranoia, xenophobia and discrimination. Only somehow we expected our immigrant society to aspire more to the ideal of “The City on the Hill.”

At least it helps realize that this particular stage too will eventually pass, or give way to something else. And while American Muslims for many reasons now bear the particular brunt of such vituperation, the pithy old Turkish proverb provides perspective as well: it Ã¼rÃ¼r kervan yÃ¼rÃ¼r , the dogs bark but the caravan moves on.

Graham E. Fuller is a former senior CIA official, author of numerous books on the Muslim World; his latest book is Breaking Faith: A novel of espionage and an American’s crisis of conscience in Pakistan.(Amazon, Kindle) grahamefuller.com

← In Case You Missed…
The Murder of Yitzhak Rabin →