Exclusive: President Obama has infuriated Official Washington’s neocons by accepting the Russian stance that the Syrian people should select their own future leaders through free elections, rather than the neocon insistence on a foreign-imposed “regime change,” reports Robert Parry.

The Washington Post’s editorial board is livid that President Barack Obama appears to have accepted the Russian position that the Syrian people should decide for themselves who their future leaders should be when the Post seems to prefer that the choice be made by neoconservative think tanks in Washington or other outsiders.

So, in a furious editorial on Friday, the Post castigated Secretary of State John Kerry for saying after a meeting with Russian President Vladimir Putin in Moscow that the Obama administration and Russia see the political solution to Syria “in fundamentally the same way,” meaning that Syrian President Bashar al-Assad could stand for election in the future. 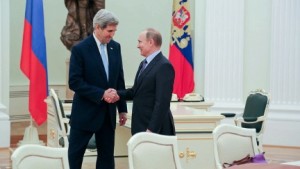 The Post wrote: “Unfortunately, that increasingly appears to be the case, and not because Mr. Putin has altered his position. For four years, President Obama demanded the departure of Mr. Assad, who has killed hundreds of thousands of his own people with chemical weapons, ‘barrel bombs,’ torture and other hideous acts. Yet in its zeal to come to terms with Mr. Putin, the Obama administration has been slowly retreating from that position.”

The Russian position, which Obama finally seems to be accepting, is that the Syrian people should be allowed to choose their own leaders through fair, internationally organized elections, rather than have outside powers dictate who can and who can’t compete in a democratic process. Obama’s previous stance was that Assad must be prevented from running in an election.

But that meant the Syrian bloodshed and resulting chaos now spreading across Europe and into the U.S. political process would continue indefinitely as the United States took the curious position of opposing democracy in favor of an insistence that “Assad must go,” a demand favored by U.S. neocons and liberal interventionists, Israel and regional Sunni “allies,” such as Saudi Arabia, Turkey and Qatar.

And regarding the editorial, you also should note the reference to Assad killing “his own people with chemical weapons,” an apparent allusion to the now-discredited but still widely accepted (inside Official Washington at least) claim that Assad was behind a lethal sarin gas attack outside Damascus on Aug. 21, 2013.

To this day, the U.S. government (or, for that matter, the Washington Post) has not presented any verifiable evidence to support the Assad-did-it allegation, but it nevertheless has become an Everyone-Knows-It-To-Be-True “group think” based on endless repetition, much as Official Washington concluded that Iraq’s Saddam Hussein had WMD stockpiles, based on the fact that it was stated as flat fact by lots of Important People, including the Post’s editorial writers.

Official Washington’s epistemology seems to be that if enough Important People say something is true, then it becomes true regardless of where the actual evidence leads. [See Consortiumnews.com’s “The Collapsing Syria-Sarin Case.”]

Other parts of the Post’s attacks are equally dubious in that the Post’s editors — who were all-in for the “shock and awe” bombing of Iraq and wouldn’t think of sharing blame for the hundreds of thousands of Iraqis killed as a result of President George W. Bush’s Washington Post-endorsed invasion — are now outraged over Syria’s homemade “barrel bombs” and blame Assad for all the deaths, even though many of the dead were Syrian soldiers killed by Islamic jihadists, armed and financed by U.S. “allies,” Saudi Arabia, Qatar, Turkey and others.

And, by the way, some torture blamed on Syria was carried out in coordination with the Bush administration’s “extraordinary rendition” program as part of the “global war on terror.” For instance, Canadian citizen Maher Arar, who was seized by the U.S. government at New York’s Kennedy International Airport in September 2002 while  on his way home to Canada, was shipped to Syria as a suspected Al Qaeda member. Arar was tortured in Syria before being cleared of suspicions by both Syria and Canada, according to a later Canadian investigation.

But, hey, you don’t expect The Washington Post’s neocon editors to give you any honest context, do you?

The more immediate issue is the Post’s fury over the prospect that the Syrian people would be allowed to vote on Assad’s future rather than have it dictated by neocon think tanks, Islamic jihadist rebels and their Turkish-Saudi-Qatari-Israeli-CIA backers.

The Post’s editors wrote, “On Tuesday in Moscow, Mr. Kerry took another big step backward: ‘The United States and our partners are not seeking so-called regime change,’ he said. He added that a demand by a broad opposition front that Mr. Assad step down immediately was a ‘non-starting position’, because the United States already agreed that Mr. Assad could stay at least for the first few months of a ‘transition process.’”

Kerry “now agrees with Mr. Putin that the country’s future leadership must be left to Syrians to work out,” the Post’s outraged editors wrote. Yes, you read that correctly.

Though the Post predicted on Friday morning that the notion of the Syrian people being allowed to decide their future leaders was “a likely recipe for an impasse,” later on Friday the United Nations Security Council voted unanimously in favor of a roadmap for a cease-fire in Syria, negotiations on a transitional government and elections within 18 months after the start of talks.

The agreement makes no reference as to whether Assad can or cannot run in the new U.N.-organized elections, meaning apparently that he will be able to participate surely to the additional dismay of the Post’s editors.

Obviously, the U.N. plan faces many obstacles, especially the continued insistence on “regime change” from Saudi Arabia, Turkey and other Sunni-led regional governments, which disdain Assad who is an Alawite, an offshoot of Shia Islam. Further condemning Assad in their eyes, he seeks to maintain a secular government that protects Christians, Alawites, Shiites and other minorities.

The Saudis, Turks and Qataris have been among the leaders in supporting violent Sunni jihadists, including Ahrar al-Sham and Al Qaeda’s Nusra Front, which operate under the Saudi umbrella called the Army of Conquest, which has received hundreds of sophisticated U.S.-made TOW missiles that have proved devastating in killing Syrian government troops. Israel also has provided some support to these jihadists operating along the Golan Heights.

While Turkey, a member of NATO, denies assisting terrorists, its intelligence services have been implicated in helping Nusra Front operatives carry out the Aug. 21, 2013 sarin gas attack outside Damascus, with the goal of pinning the blame on Assad and tricking Obama into ordering a devastating series of air strikes against Syrian government forces. [See Consortiumnews.com’s “Was Turkey Behind Syria Sarin Attack?”]

Turkey also has allowed the hyper-brutal Islamic State to transit through nearly 100 kilometers of openings on the Syrian-Turkish border, including passage of vast truck convoys of Islamic State oil into Turkey for resale, a reality that Obama recently raised with Turkish President Recep Tayyip Erdogan, who has long promised but failed to seal the border. [See Consortiumnews.com’s “A Blind Eye Toward Turkey’s Crimes.”]

At home, President Obama also faces political difficulties from Israel and from Official Washington’s alliance of neoconservatives and liberal interventionists who have made Assad’s ouster a cause cÃ©lÃ¨bre despite the disastrous experiences overthrowing other secular regimes in Iraq and Libya.

In the past, Obama has been highly sensitive to criticism from this group, including nasty comments on the Post’s editorial page. But the Post’s ire on Friday suggests that at least for the moment Obama is putting pragmatism (i.e., the need to stop the Syrian killing and the global insecurity that it is causing) ahead of neocon/liberal-hawk ideological desires.