Exclusive: Courage, like cowardice, can grow when an action by one person influences decisions by others, either toward bravery or fear. Thus, the gutsy whistle-blowing by some NSA officials inspired Edward Snowden to expose mass data collection on all Americans, recalls ex-CIA analyst Ray McGovern.

On Jan. 7, 2014, four senior retired specialists with a cumulative total of 144 years of work with NSA William Binney, Thomas Drake, Edward Loomis, and Kirk Wiebe prepared a Memorandum for the President providing a comprehensive account of the problems at NSA, together with suggestions as to how they might be best addressed. 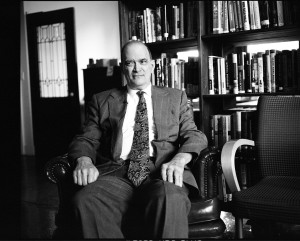 The purpose was to inform President Obama as fully as possible, as he prepared to take action in light of Snowden’s revelations.

On Jan. 23, 2015 in Berlin, Binney was honored with the annual Sam Adams Award for Integrity in Intelligence. Ed Snowden was live-streamed-in for the occasion, and said, “Without Bill Binney there would be no Ed Snowden.” (Binney had been among the first to speak out publicly about NSA abuses; apparently that emboldened Snowden to do what he did.)

Snowden had already said when he fled to Hong Kong in June 2013 that he had learned an extremely important lesson from the four years of government persecution/prosecution of Tom Drake; namely, that he, Ed Snowden, had to leave the country in order to fulfill his mission and to have some reasonable chance to avoid spending the rest of his life behind bars. (Eventually, all the felony charges against Drake were dismissed.)

An important take-away lesson from Binney’s and Drake’s boldness and tenacity is that one never knows what impetus courageous truth-tellers can give to other, potential whistleblowers like Ed Snowden.

In 1998, Bill Binney, with some 35 years under his belt as a senior NSA mathematician and cryptologist took on a staggering problem for NSA: how to deal with the vast amount of data available on the world wide web without burying intelligence analysts under a haystack of data.

From Binney’s long experience, it seemed clear that selecting information by using metadata relationships was the smart way to go. As he puts it, “Smart selection is smart collection.”

This approach was totally different form the word/phrase dictionary-select type approach in general use even today. Binney’s technique was to use metadata and some additional rules to define relationships. This enabled discriminate selection of data from the tens of terabytes twisting in the ether. The approach focused the collected data around known targets, plus some potential developmental targets, and yielded much more manageable content for analysts to deal with.

Experience had long since shown that collecting everything in bulk, and using word/phrase type queries, end up burying analysts in data and making them dysfunctional.  In some of the internal NSA memos released by Snowden, NSA analysts complain of the kind of analysis paralysis that makes it extremely difficult for them to find and address the real threats.

As Snowden has quipped, “The problem with mass surveillance is when you collect everything, you understand nothing.”

The net result is that people die first. Only then do detectives and law enforcement go wading into their vast data, focus on possible perpetrators of the crime and often find related information.  This is, of course, exactly the reverse of how the security services should proceed assuming the main priority is to thwart terrorist or other attacks. And yet the U.S. government proceeds willy-nilly with its SOS (Stasi-On-Steroids) approach.

In sum, success can come only from a focused, disciplined selection of data off the fiber lines, yielding usable metadata, as Binney and his NSA colleagues demonstrated.  Indeed, there was quite enough electronic intelligence collected by THINTHREAD, the collection system Binney and his team created, before 9/11 to have thwarted the attacks, as NSA senior executive Thomas Drake learned, to his horror, after the fact.

“Smart selection” techniques can also protect individual privacy, as Binney and his colleagues likewise showed.  More to the point, this approach can provide a rich but manageable data environment for analysts to use toward one of the most important intelligence objectives predicting intentions and capabilities.

This way, one is not reduced to watching attack after attack and then wiping up the blood and searching data bases for clues to the perpetrators primarily the job of law enforcement.

Sadly, recent history has shown that the directors of U.S. intelligence services lie, and that directors of the NSA lie blatantly and suffer zero consequences. On March 12, 2013 (less than two months before the Snowden revelations), National Intelligence Director James Clapper lied under oath in denying that NSA was “wittingly” collecting “any type of data at all on millions or hundreds of millions of Americans.”

Sen. Ron Wyden, D-Oregon, had put that question to Clapper that day at a formal, open Senate Intelligence Committee hearing.

Similarly, on June 27, 2013, three weeks after the first Snowden revelations started coming, then-NSA Director Keith Alexander lied in telling the same Senate committee that NSA’s bulk telephone surveillance program had thwarted 54 terrorist “plots or events.” On Oct. 2, 2013, Gen. Alexander admitted, in testimony before the Senate Judiciary Committee, that the number of terrorist plots thwarted was not 54, but one. (And that particular one cannot bear close scrutiny.)

If democracy still means anything, we the people need to devise some kind of replacement for the sleepy “watchdogs” in Congress who have forfeited their responsibility to oversee and verify what the intelligence agencies are doing.  Again, Bill Binney has what seem the most sensible and doable suggestions toward that end.

He has called for a properly cleared technical team, responsible to the courts, with clearly spelled-out authority to go into any intelligence agency and look directly into and inspect data bases and the tools in use. This would be a giant step toward ensuring that we the people through this intrusive inspection regime could monitor in some rudimentary way what our intelligence agencies are doing.

Binney suggests further that intelligence agencies be required to implement software to monitor their own networks to detect automatically and to report immediately violations of law and regulation.

Ray McGovern works with Tell the Word, a publishing arm of the ecumenical Church of the Saviour inner-city Washington. He is co-founder of Veteran Intelligence Professionals for Sanity (VIPS), and is indebted to VIPS member Bill Binney for much of the substance of this article, which came from McGovern’s prepared text for remarks at a conference on Thursday in Moscow, marking the 10th anniversary of RT’s founding.

13 comments for “The Courage from Whistle-blowing”