Exclusive: Republican presidential campaign rhetoric is red-hot regarding Islamic terrorism, with Sen. Cruz suggesting the use of nuclear weapons to see “if sand can glow in the dark,” a threat even more troubling than Donald Trump’s call to temporarily bar Muslims from entering the U.S., writes Robert Parry.

As Republican presidential candidates lined up to one-up each other about how they would fight Islamic terrorism, many mainstream pundits questioned the hysteria and took particular aim at billionaire Donald Trump for seeking a moratorium on admitting Muslims to the United States, but Trump’s proposal was far from the most outrageous.

Getting much less attention was a statement by Sen. Ted Cruz of Texas, who is considered by many a more likely GOP nominee than Trump. Cruz suggested that the United States should nuke the territory in Iraq and Syria controlled by Islamic State militants. 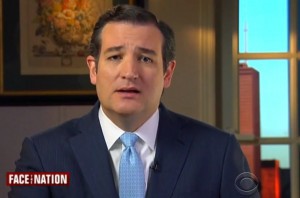 “I don’t know if sand can glow in the dark, but we’re going to find out,” Cruz told a Tea Party rally in Cedar Rapids, Iowa. In reference to Cruz’s comment, a New York Times editorial added, “whatever that means.” But the phrase “glow in the dark” popularly refers to the aftermath of a nuclear bomb detonation.

In other words, Cruz was making it clear to his audience that he would be prepared to drop a nuclear bomb on Islamic State targets. While the bombastic senator from Texas was probably engaging in hyperbole as he also vowed to “carpet bomb them into oblivion” the notion of a major candidate for President cavalierly suggesting a nuclear strike would normally be viewed as disqualifying, except perhaps in this election cycle.

While Cruz drew little attention for his “glow in the dark” remark, Trump came under intense criticism for his proposal to block the admission of Muslims into the United States until the nation’s leaders can “figure out what is going on” in the aftermath of the Dec. 2 terror attack by a Muslim husband-and-wife team in San Bernardino, California.

Across mainstream politics and media, Trump’s idea was decried as both “unprecedented” from a top candidate for President and a likely violation of the U.S. Constitution which respects freedom of religion and requires equal protection under the law.

Other Republican candidates, even the more “moderate” ones, also talked tough about Muslims in what shaped up as a heated competition to outdo one another in appealing to the angry and frightened right-wing “base” of the GOP.

Former Florida Gov. Jeb Bush argued that the threat from Muslims was unique: “The idea that somehow there are radical elements in every religion is ridiculous. There are no radical Christians that are organizing to destroy Western civilization. There are no radical Buddhists that are doing this. This is radical Islamic terrorism.”

Bush’s comment failed to recognize that the institution of Christianity has been at the center of “Western civilization” since the latter days of the Roman Empire and that “Christian” nations have routinely plundered other civilizations all over the planet, including across the Islamic world both in Asia and Africa. [See Consortiumnews.com’s “Why Many Muslims Hate the West” and “Muslim Memories of West’s Imperialism.”]

Though inspired by a pacifist, Christianity has established a record as the most bloodthirsty religion in history, with its adherents conducting massacres and genocides in North America, South America, Asia, Africa, Europe and Australia every continent except Antarctica, which is largely uninhabited by humans. In many cases, European Christians justified the repression and extermination of non-Christians as the will of God, deeming indigenous people to be “heathens.”

The violence by Western nations against Muslims also is not something confined to history books and the distant past. In 2003, U.S. President George W. Bush and British Prime Minister Tony Blair led an unprovoked invasion of Iraq which killed hundreds of thousands of people and destroyed much of Iraq’s national infrastructure.

In other words, in the view of many Middle Easterners, the West continues to wage war against their civilization. However, none of that reality is reflected in the current U.S. political and media debate, even when a major Republican candidate raises the prospect of dropping the Bomb.

← The Religious Element of Terrorism
Putting the ISIS ‘Crisis’ in Context →