Exclusive: Trying to soothe American fears about “terrorism,” President Obama glossed over the dangerous contradictions in his own policy, particularly the fact that Saudi Arabia, Turkey and other “allies” have been helping Al Qaeda and ISIS, notes Daniel Lazare.

President Barack Obama came off well in his nationwide address on the San Bernardino shootings. He was lively and expressive and he even achieved a moment of pathos when he urged Americans not to “turn against one another by letting this fight be defined as a war between America and Islam.”

But otherwise he was the incredible shrinking president. The problem was not so much his use of clichÃ©s the victims are “part of our American family founded upon a belief in human dignity let’s make sure we never forget what makes us exceptional,” etc. rote phrases that are somehow meant to be reassuring and comforting. 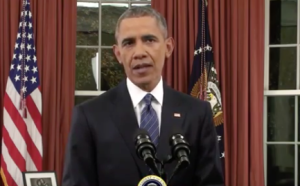 Rather, it was the denials, half-truths and outright misstatements that leave no doubt that the man is clinging to a failed policy and that whatever changes he makes in the wake of the San Bernardino killings will only make matters worse.

As for half-truths and misstatements, perhaps the best place to begin is with the concept of terrorism. Although Obama spoke the T-word some two dozen times during the course of his address, he holds a selective view of what it means.

By any objective measure, there isn’t any. This is why Obama and others utter the word “terrorism” so incessantly because it is a highly-loaded term that serves as a smokescreen to disguise the true nature of their own activities. It allows them to get away with murder, but it also leaves them punching at the air.

By arbitrarily classifying certain groups as terrorist or non-terrorist merely because of which side they happen to be on at any given moment, Obama and other abusers of the T-word wind up not only fooling the public, but themselves as well.

This tendency toward self-deception was evident in Obama’s references to Al Qaeda and ISIL (also known as ISIS, Islamic State and Daesh).

“In Iraq and Syria, airstrikes are taking out ISIL leaders, heavy weapons, oil tankers, infrastructure. And since the attacks in Paris, our closest allies including France, Germany and the United Kingdom have ramped up their contributions to our military campaign, which will help us accelerate our effort to destroy ISIL.”

But wait what happened to Al Qaeda? Obama’s sleight of hand was designed to obscure the fact that, while bombing ISIS, the U.S. has been standing by as Turkey and Saudi Arabia, two of its closest regional “allies,” have channeled money and arms to Al Nusra, Al Qaeda’s official Syrian affiliate, via an Islamist umbrella group calling itself the Army of Conquest.

The administration didn’t even speak up when Al Nusra issued an Arabic-language video thanking the U.S.-backed and supposedly “moderate” Free Syrian Army for supplying it with advanced weaponry, according to a new Israeli-Arab news organization known as Al-Masdar.

So, while bragging about killing bin Laden (in 2011) and “decimating” Al Qaeda’s leadership, Obama forgot to mention that the U.S. is currently backing the same forces as they seek to topple the Assad government in Damascus or at least backing groups that cooperate with Al Qaeda.

Obama noted that “groups like ISIL grew stronger amidst the chaos of war in Iraq and then Syria” while also forgetting to mention growing reports that it is not only chaos that has allowed ISIS to grow, but donations from super-rich Arab gulf monarchies, which the U.S. government considers its “allies.”

“We’re working with Turkey to seal its border with Syria,” Obama added, when in fact Turkish Prime Minister Ahmet DavutoÄŸlu has already given the proposal the cold shoulder and Turkey’s alleged border-sealing effort is belied by evidence that giant convoys carrying ISIS oil have been routinely entering Turkey without resistance. At least until Russia essentially shamed the U.S. into joining in a bombing interdiction campaign last month.

Obama bragged that “sixty-five countries have joined an American-led coalition” against ISIS, an unconscious echo of George W. Bush’s claim that 48 nations had joined a “Coalition of the Willing”  to invade Iraq. But Obama neglected to note that the Saudis and other Gulf monarchies have all but abandoned the effort in order to concentrate on their sectarian war against Shi’ite Houthis in Yemen, where some 2,600 civilians have died since air strikes began in March.

Obama also forgot to mention Russia, whose warplanes are pounding ISIS, Al Nusra and other rebel forces. While promising to “continue to provide training and equipment to tens of thousands of Iraqi and Syrian forces fighting ISIL on the ground so that we take away their safe havens,” Obama said nothing about tens of thousands of Syrian army troops who have been battling ISIS, Al Nusra, and other Salafist groups since at least 2012, despite sanctions from the U.S. and other Western powers.

Obama also failed to mention Syrian President Bashar al-Assad even though overthrowing his government is clearly America’s prime goal. Somehow, Obama has gotten it into his head that the best way to combat ISIS is by ridding it of its foremost enemy, a case of self-deception raised to the nth degree.

The Saudi Brand of Islam

But Obama was perhaps at his most duplicitous in his comments about religion. The killers in San Bernardino “embrac[ed] a perverted interpretation of Islam,” he said.

But, Obama added, Islamic State “does not speak for Islam. They are thugs and killers, part of a cult of death, and they account for a tiny fraction of more than a billion Muslims around the world, including millions of patriotic Muslim Americans who reject their hateful ideology.”

That is quite true. But then he went on to say:

“That does not mean denying the fact that an extremist ideology has spread within some Muslim communities. This is a real problem that Muslims must confront, without excuse. Muslim leaders here and around the globe have to continue working with us to decisively and unequivocally reject the hateful ideology that groups like ISIL and al Qaeda promote; to speak out against not just acts of violence, but also those interpretations of Islam that are incompatible with the values of religious tolerance, mutual respect, and human dignity.”

Yet, if Muslim leaders are to “continue” working to oppose such ideology, that assumes that they are doing so already. But the Saudis, the dominant power among the Arab Gulf states, is probably the most illiberal society on earth, one that bars all religions other than ultra-conservative Wahhabist Islam, arrests Christians for the “crime” of attending underground religious services, and savagely represses its own 15-percent Shi‘ite minority.

In 2006, Freedom House and the Institute for Gulf Affairs, both eminently conservative organizations, issued a joint report finding that Saudi textbooks instruct students to “hate” Christians, Jews, polytheists, and unbelievers; teach that the Crusades are still ongoing; advise students not to greet, befriend, imitate, or even be courteous to non-Wahhabists; and state that “the struggle between Muslims and Jews” will continue until judgment day and that “Muslims will triumph because they are right.”

What’s more, Obama knows this reality because the State Department completed its own comprehensive study of Saudi textbooks in 2012. Yet the administration opted to suppress the report for the same reason that it has suppressed a 28-page chapter in the joint congressional report on 9/11 dealing with the question of Saudi complicity because the alliance with Riyadh is sacrosanct and trumps other “minor” issues such as religious bigotry and the attack on the World Trade Center.

The Saudi Arabia also got a pass regarding its connection to the San Bernardino massacre. Obama promised in his speech to “put in place stronger screening for those who come to America without a visa so that we can take a hard look at whether they’ve traveled to warzones.”

But Tashfeen Malik, the woman who reportedly pledged allegiance to ISIS shortly before embarking on a killing spree with her husband Syed Rizwan Farook, did not travel to a warzone. She traveled and lived in Saudi Arabia.

Although Tashfeen Malik was of Pakistani origin, she spent most of her life in Saudi Arabia, where she and her father drank deeply from the well of Wahhabism. Relatives say her father emerged deeply conservatized from the experience while Tashfeen was so thoroughly Saudi in her outlook that when she returned to Pakistan to study pharmacology, she had difficulty adjusting even on a campus notorious for its fundamental Islamic influences.

“She told me, ‘My parents live in Saudi Arabia, and I am not getting along with my roommates and cannot adjust with them, so can you help me?’” one faculty member told The New York Times.  Yet no one thought to worry since both Saudi Arabia and Pakistan are key U.S. “allies.”

Barack Obama is thus a man caught in a bind. If his speech was rife with contradictions, it’s because he wants to have his cake and eat it, too. He supports Sunni extremists in Saudi Arabia, Yemen and Syria, yet is shocked, shocked, when they unleash their violence on innocent bystanders in Paris or San Bernardino.

Obama claims to be at war with Al Qaeda, yet looks the other way when close friends supply the same group with money and arms. He cautions Americans not to give in to Islamophobia, but says nothing as Wahhabists rage against Christians, Jews and Shi‘ites.

The President is all in favor of secularism, yet is seeking to topple the secular Baathist regime in Damascus. Indeed, he is waging war against one of the few secular governments left standing in the Muslim world.

He promises that “the strategy that we are using now airstrikes, Special Forces, and working with local forces who are fighting to regain control of their own country that is how we’ll achieve a more sustainable victory.”

But under his watch, Al Qaeda and ISIS have expanded from Bangladesh to Morocco, with the latter now in charge of a territory the size of Great Britain in northern Syria and Iraq. How many more such victories can the world take and how much longer can the U.S. government keep covering up for the Saudis?

If Marine Le Pen’s neo-fascist National Front emerged as the biggest winner in French regional elections this weekend and Donald Trump is now 20 points ahead of his Republican competitors, it’s because voters have lost confidence in their leaders’ ability to combat ISIS and Al Qaeda.

The only way they know how to respond is by closing U.S. borders and keeping out anyone who looks the least bit like a “terrorist.” If Obama’s gun-control message is failing to make headway, it is for the same reason. If the government can’t protect them against ISIS, growing numbers of Americans figure that the only solution is to protect themselves by arming to the hilt. Thus, fear of “terrorism” contributes to the street-level arms race that Obama is unable to contain.

42 comments for “The Incredible Shrinking President”