Part of Official Washington’s problem is that most journalists at least those called on at presidential news conferences represent the same “group think” that pervades the government, meaning President Obama doesn’t get asked truly probing questions, as William Blum notes at Anti-Empire Report.

Questions to ask President Barack Obama the next time (also the last time) you’re invited to one of his press conferences:

Which is most important to you destroying ISIS, overthrowing Syrian President Bashar al-Assad, or scoring points against Russia?

Do you think that if you pointed out to the American people that Assad has done much more to aid and rescue Christians in the Middle East conflicts than any other area leader that this would lessen the hostility the United States public and media feel toward him? Or do you share the view of the State Department spokesperson who declared in September that “The Assad regime frankly is the root of all evil”? 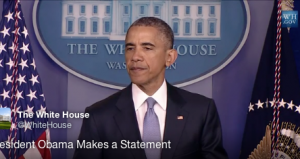 Why does the United States maintain crippling financial sanctions and a ban on military aid to Syria, Cuba, Iran and other countries but not to Saudi Arabia?

What does Saudi Arabia have to do to lose its strong American support? Increase its torture, beheadings, amputations, whippings, stonings, punishment for blasphemy and apostasy, or forced marriages and other oppression of women and girls? Increase its financial support for ISIS and other jihadist groups? Confess to its role in 9/11? Attack Israel?

Does it concern you that Turkey appears to be more intent upon attacking the Kurds and the Russians than attacking ISIS? And provides medical care to wounded ISIS soldiers? Or that ISIS deals its oil on Turkish territory? Or that NATO-member Turkey has been a safe haven for terrorists from Libya, Chechnya, Qatar and elsewhere? Or that last year Vice President Joe Biden stated that Turkish President Recep Tayyip Erdogan’s regime was backing ISIS with “hundreds of millions of dollars and thousands of tons of weapons”?

If NATO had never existed, what argument could you give today in favor of creating such an institution? Other than as some would say being a very useful handmaiden of U.S. foreign policy and providing American arms manufacturers with trillions of dollars of guaranteed sales.

Does the United States plan on releasing any of its alleged evidence to back up its repeated claims of Syrian bombing and chemical warfare against the Syrian people? Like clear photos or videos from the omnipresent American satellite cameras? Or any other credible evidence?

Does the United States plan on releasing any of its alleged evidence to back up its repeated claims of Russian invasions of Ukraine in the past year? Like clear photos or videos from the omnipresent American satellite cameras? Or any other credible evidence?

Do the numerous connections between the Ukrainian government and neo-Nazis have any effect upon America’s support of Ukraine? What do you imagine would have been the outcome in World War Two if the United States had opposed Soviet entry into the war because “Stalin must go”? Would you prefer that Russia played no military role at all in Syria?

Can the administration present in person a few of the Syrian opposition “moderates” we’ve heard so much about and allow the media to interview them? Have you considered honoring your promise of “No boots on the ground in Syria” by requiring all American troops to wear sneakers?

Don’t tell my mother I work at the State Department. She thinks I play the piano in a whore house.

[Somewhat more probing questions can be asked at non-presidential press briefings because more foreign reporters and some skeptical American journalists are allowed to participate.]

QUESTION: President Obama said he will reach out to President Erdogan over the next few days.

QUESTION: Did not mention Putin. That really puts you squarely on Turkey’s side, doesn’t it?

QUESTION: You’re saying Turkey has the right to defend itself; President Obama said the same thing. What defense are you talking about? Does anyone think Russia was going to attack Turkey?

TONER: Again, I mean, this is

QUESTION: Do you think so?

TONER: Look, I don’t want to parse out this incident. I said very clearly that we don’t know all the facts yet, so for me to speak categorically about what happened is frankly, would be irresponsible.

QUESTION: Even if you accept the Turkish version that the plane traveled 1.3 miles inside Turkey and violated its airspace for 17 seconds that’s according to Turkey do you think shooting down the plane was the right thing to do?

TONER: Again, I’m not going to give you our assessment at this point. We’re still gathering the facts.

QUESTION: In 2012, Syria shot down a Turkish plane that reportedly strayed into its territory. Prime Minister Erdogan then said, “A short-term border violation can never be a pretext for an attack.” Meanwhile, NATO has expressed its condemnation of Syria’s attack as well as strong support for Turkey. Do you see the inconsistency of NATO’s response on this?

TONER: As to what President Erdogan may have said after that incident, I would refer you to him.

QUESTION: Turkoman forces in Syria said they killed the two Russian pilots as they descended in parachutes.

QUESTION: Turkoman forces are supported by Turkey and are fighting against the Syrian Government, they are part of the rebel force there. Do you consider these rebels to be a moderate force in Syria?

QUESTION: I’m trying I mean, do you think that everybody has the right to defend themselves?

TONER: We’ve said very clearly that people have the right to defend themselves.

QUESTION: Right? Including the Assad regime?