A constant irritant exacerbating the anger in the Middle East is the Israeli-Palestinian conflict, with Israeli Prime Minister “Bibi” Netanyahu privately believing that no solution is really possible though he may pretend otherwise in public, what some call “Bibi-ism,” writes Michael Winship.

Maybe I didn’t get the memo, but I hadn’t heard the word “Daesh” used to describe ISIS until our recent trip to Israel and Jordan. Now, since the attacks in Paris, even President Barack Obama and Secretary of State John Kerry have been saying it.

As The Guardian explained earlier this year, “The term is based on an Arabic acronym al-Dawla al-Islamiya fil Iraq wa’al Sham, which translates as Islamic State of Iraq and Sham (Syria), but is close to ‘Dahes’ or “one who sows discord.’” 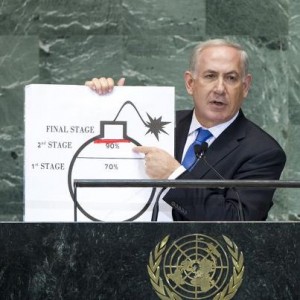 That wordplay has ISIS members threatening severe bodily harm to anyone who uses it, yet as Matt Iglesias and Zack Beauchamp pointed out at Vox, “Daesh” is useful in the West because, unlike ISIS or Islamic State, it neither directly suggests some sovereign territorial caliphate nor impugns the Islamic religion.

My girlfriend, Pat, and I had left Tel Aviv at the end of our first week in Israel, flown to the resort city of Eilat and then, early the next morning, walked through the Yitzhak Rabin Terminal, across no man’s land under the gaze of soldiers in watchtowers and into Jordan.

We spent a day at the incredible ancient city of Petra and a day in Wadi Rum, the desert valley through which Lawrence of Arabia trekked on his way to take Aqaba from the Turks during World War I. We drove north to within half an hour of the Syrian border and toured the Roman ruins in the city of Jerash as around us Jordanian schoolgirls sang and danced their way through a class field trip.

Mostly because of fears of Daesh/ISIS and Al Qaeda, tourism is down dramatically in Jordan, as it is throughout the region. But we felt safe the whole time we were there, and everyone was tremendously kind and hospitable, although as we rolled out of Jerash we did spot a small restaurant somewhat disconcertingly called The Sniper CafÃ©.

We returned from Jordan to Israel as stabbings and other incidents of violence, many of them fatal, continued between Palestinians and Israelis. The final few days of our visit were spent in Jerusalem, with a quick, unexpected detour to Bethlehem. We had been told at the beginning of our trip that it was too dangerous, and television news reports highlighted clashes there between young Palestinians and authorities, but a taxi driver said he would get us there and did.

In truth, Nativity Square was more crowded with tourists than it had been the early morning I was there 11 years ago, during the waning days of the second intifada. But the demonstrations continue and merchants say it’s bad for business.

“The tear gas has become our perfume,” a hotel waiter joked with one reporter. “We hope this will end soon.” Still, a local shop owner said to us, “Thank you for coming and not believing CNN and Fox News.”

Roadblocks and checkpoints slowed the way back to our Jerusalem hotel. “This is not about security,” our cab driver sighed. “It’s just to give people a hard time.”

In Israel, not only the Israeli-Palestinian conflict but also concerns about Daesh would arise in several of our conversations about the situation there.

Ali Wakad, the Palestinian journalist who co-wrote the motion picture Bethlehem, was worried that after the perceived failures in the Middle East of socialism and communism, the nationalist Pan-Arab movement, liberalization and “negotiations with the enemy,” many of the Arab people, including the Palestinians, had decided, “why not give the Islamists the chance to rule” — a move he felt would endanger “secular and liberal people in the Arab world.”

Wakad believed that Israel had squandered the opportunity it had to make peace with the Palestinian Authority and now that the PA’s leadership is so weak and corrupt, the country faces other opponents who no longer care about a return to the 1948 borders when Israel was created or the 1967 borders before the Six Day War.

Israeli Prime Minister Benjamin “Bibi” Netanyahu manipulates fear of such an Islamic nation for political gain. Meanwhile, the Palestinians continue to protest occupation, the settlements in the West Bank and East Jerusalem, and the constant encroachments of far-right religious extremists on their lives and land.

Netanyahu pledges to maintain “the status quo” at the al Aqsa mosque/Temple Mount in Jerusalem’s Old City that limits prayers at the site to Muslims but the real status quo he clings to is the crony capitalism that keeps Bibi and his friends in power and at the high end of the nation’s vast income inequality.

“There is an extreme concentration of wealth and power among a tiny group of people at the top,” Nobel Prize winning economist and New York Times columnist Paul Krugman noted in March. “And I mean tiny. According to the Bank of Israel, roughly 20 families control companies that account for half the total value of Israel’s stock market.”

Journalist Asher Schechter recently asked in the Israeli newspaper Ha’aretz, “What is Bibi-ism? Bibi-ism is the belief that there is no solution to the conflict, because the conflict is not about mundane things like lands and rights, but a mythical struggle between two abstract concepts: Western values and radical Islam. Israel is powerless to stop it, the same way Jews are powerless to stop anti-Semitism. They just have to learn to live with it.”

Learning to live with it would be an impossibility if that “mythical struggle” was truly the basis for the Palestinians’ desire for recognition and equality, but it’s not.

Over a beer on our last night in Jerusalem, I talked with Rami Younis, a young Palestinian journalist and blogger who rejected those who say, “Palestinians are ISIS, Palestinians are terrorists, Palestinians are crazy. The truth is, Palestinians are so sick and tired of occupation that they are willing to die fighting against it. I think that the right term is depression. They are depressed. This is basically not a religious conflict, not an ISIS thing like they would like to have you think. It’s a colonial thing. Just like South Africa.

Yet he told me, “We are willing to forget the past. All we want, and that’s basically a thing you can ask the most hardcore extreme Palestinian activists, what we want is basically to have all human beings living from the river to the sea, living equally.

“I think we do know how to fight occupation. We just need the world to support us.”

I spoke, too, with my longtime friend Angela Godfrey-Goldstein, an Israeli peace activist with the Jahalin Association, a group fighting the forcible displacement of Palestinians so that settlements can expand.

“I really find it tragic because it could be great and there’s no shortage of decent people on both sides,” she said. “We have to open our hearts, understand that we’re the stronger and we have security and therefore we are the ones who have to be generous. Anything can work if you have people who want it to work.

“Netanyahu speaks about the status quo but what about the daily demolitions, what about all these young kids they’re arresting, what about the way they’ve closed off all of the Palestinian neighborhoods? They’re making life impossible for people. That’s not going to bring security, it’s part of what creates conditions in which terror thrives.”

As Angela spoke, we smelled burning rubber from tires set on fire near a checkpoint.

She continued, “We really do need a world leader, whether it’s the pope or the next president to say to the Israeli public, you have two choices: you can continue with the settlements and all the occupation policies that are enabling those settlements and create a reality in which peace is no longer an option or you can grow up, get a life and start to learn to live together and share. Because the Palestinians aren’t going anywhere and the world is becoming more and more anti-Israel because of the treatment of people who should have normal rights.”

Despite Daesh/ISIS advances in other parts of the Middle East, despite the fear of Islamic fundamentalist rule expressed by people like Ali Wakad, despite the current violent unrest in Israel that is not yet a third intifada, I came away thinking that as hopeless as it too often seems, against all odds, there’s still a solution to be had, still time for the sides to sit down at the table and make a deal. But not much.

Michael Winship is the Emmy Award-winning senior writer of Moyers & Company and BillMoyers.com, and a former senior writing fellow at the policy and advocacy group Demos. Follow him on Twitter at @MichaelWinship. [This story was originally published at http://billmoyers.com/2015/11/23/daeshisis-is-not-israels-problem-for-now/]

5 comments for “The Bitter Fruit of ‘Bibi-ism’”