A fairly new and thoroughly obnoxious Christmas tradition is for right-wing American Christian fundamentalists to detect some imagined slight and pronounce it part of the “War on Christmas,” with this year’s battle lines drawn around the Starbucks’ winter-themed cups, as Nat Parry observes.

Just as the commercial extravaganza of the Christmas season seems to begin earlier and earlier each year, with displays popping up in some places not long after Labor Day, so too does the annual absurdity known as “the War on Christmas.”

This year, we have an early taste of the asinine arguments to come with a contrived controversy over the choice that Starbucks has made for its holiday-themed coffee cup. Eschewing its typical designs incorporating iconic wintry images of reindeer and snowmen, the 2015 cup goes for a minimalist approach of a plain bright red design with the green Starbucks logo in the center. 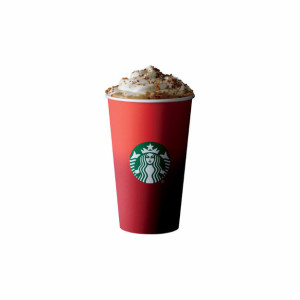 With no pictures of Baby Jesus or even snowflakes, the red and green cup evidently is not “Christmassy” enough for some Christians, many of whom have taken to the Internet to vent their outrage. In a viral Facebook post that has received more than 10 million views, Joshua Feuerstein fumed: “Starbucks REMOVED CHRISTMAS from their cups because they hate Jesus.”

Within days, both #RedCups and #MerryChristmasStarbucks were trending on social media sites (although to be fair, many of the posts were ridiculing those who have gotten so bent out of shape). One typical tweet read, “If you’re Christian & upset over Starbucks cups, your priorities are out of whack and you don’t have enough to do.”

While it is certainly true that in a world rocked by refugee crises, environmental catastrophes, global conflicts, poverty and growing wealth inequality, these Christian anti-Starbucks crusaders would probably do well to get their priorities straight, it should also be said that the very premise of this annual “War on Christmas” and the notion of Christmas as a Christian tradition ought to be fundamentally re-examined.

The Starbucks controversy is particularly bizarre because the icons that Starbucks has used on their cups in years past, such as snowflakes and ice skates, obviously have no religious significance to begin with, but what people should realize is that neither do most of the typical “Christmas” icons.

The fact is, what we consider traditional celebrations of Christmas actually have very little to do historically with Christianity. Acts, for example, such as bringing evergreen trees into homes and festooning them with decorations are pagan traditions that predate the birth of Christ by hundreds of years.

In actual reality, there has been a midwinter festival of one sort or another in Europe, Scandinavia and the Middle East for millennia, and it wasn’t until the Fourth Century, A.D., that the Church claimed this holiday as “Christmas,” arbitrarily selecting Dec. 25 as Jesus’s birthday.

In other words, religious significance was bestowed on a pre-existing celebration that had no real relation to the Christian faith. For what it’s worth, it is almost certain that Jesus was not born on this day, as it was the cold rainy season in Judea and not a time when shepherds generally tended to “watch their flocks by night” as described in scripture.

Rather than being a celebration of the savior’s birthday, the roots of the holiday are the pagan traditions of Winter Solstice (also known as Yule, or “Wheel,” which is what Christmas is still called in Scandinavia). In the northern countries, where days grow intolerably dark at this time of year, the seasons played a central role in the lives of ancient peoples, who therefore had a special reverence for the sun.

This is why its return was celebrated with such vigor, not only in Scandinavia but also in Britain, where the ancient Druids celebrated by cutting the mistletoe that grew on the oak tree and offering it as a blessing. Also taking place this time of year was the ancient festival of the Romans to celebrate the rebirth of the year, a time of general debauchery known as Saturnalia.

It was because of its known pagan origins that the holiday was banned by the Puritan-led English Parliament in 1647, which denounced it as “a popish festival with no biblical justification.” The holiday was also prohibited by the original English settlers of Massachusetts.

As the Puritan Reverend Increase Mather of Boston observed in 1687, “the early Christians who first observed the Nativity on December 25 did not do so thinking that Christ was born in that Month, but because the Heathens’ Saturnalia was at that time kept in Rome, and they were willing to have those Pagan Holidays metamorphosed into Christian ones.”

For this reason, Christmas was forbidden by the Puritans and its observance was illegal in Massachusetts between 1659 and 1681. It is ironic, to say the least, that it was the fundamentalist Christians of early America who waged the original “War on Christmas,” declaring the holiday blasphemous and lacking any biblical justification.

If fundamentalist Christians today were truly following their faith, they would not be up in arms over Starbucks’ marketing choices for selling coffee, but instead following in the footsteps of the Puritans shunning this holiday and focusing on any number of causes more closely in line with the teachings of Jesus say, for example, the recurring theme in the Bible to alleviate the suffering the poor.

If, however, modern Christians feel so adamant about the need to celebrate their savior’s birthday, they might consider choosing another day. If we take the word of the Bible at face value (as fundamentalist Christians generally insist that we must), we simply should not be marking the birth of Christ on December 25, as this is almost certainly not his birthday.

While there are few historical clues to go by in determining the actual date of Jesus’s birth, the most widely cited source is the Gospel of Luke’s reference to shepherds grazing their sheep in the fields. This has been widely interpreted to imply a birth during the springtime, summer or early fall.

So, why not declare a day in August to be Jesus’ birthday? This would be far less arbitrary than the Church’s Fourth Century decree designating Dec. 25 as the savior’s birthday, and with most schools in summer recess, it would fit in well with pre-existing holiday schedules. It would also be a day that Christians don’t have to share with anyone else, since there are so many competing traditions around the time of the Winter Solstice.

And most importantly, it would end the annual absurdities that we call the War on Christmas.

Nat Parry is the co-author of Neck Deep: The Disastrous Presidency of George W. Bush. [This story originally appeared at Essential Opinion, https://essentialopinion.wordpress.com/2015/11/08/a-modest-proposal-to-end-the-war-on-christmas/.]

← How Israel Out-Foxed US Presidents
How Technology Kills Democracy →

31 comments for “A New ‘War on Christmas’ Absurdity”