Israel’s enforcement of its Gaza blockade has involved storming aid ships in international waters, including the 2010 assault on the Turkish ship Mavi Marmara in which Israeli commandos killed nine people, a case that has now led to a lawsuit against former Israeli Defense Minister Barak, writes Ann Wright.

A lawsuit has been filed in the United States against former Israeli Prime Minister and Defense Minister Ehud Barak for his role in the 2010 Israeli commando attack upon the Gaza Freedom Flotilla in which eight Turkish citizens and one American citizen were killed by Israeli forces and over 50 Turkish passengers were wounded.

The trial would be the first time a former Israeli Prime Minister would be put on trial for reasons of international terrorism. 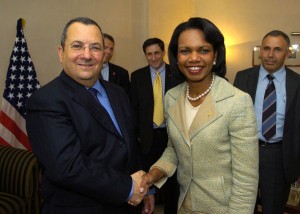 The family of Furkan Dogan, the American citizen who appears to have been executed in the attack — shot five times, including point blank to the head, according to the family’s lawyers — filed the lawsuit in the Central District Court of California. Notice of the trial was handed to Barak on Oct. 20 in Los Angeles when he spoke in the Distinguished Speaker series of Southern California.

According to a press release from the Turkish International Humanitarian organization that sponsored the Mavi Marmara ship, charges against Barak include his planning and leadership in the murder of Furkan Dogan and others in international waters, willful killing, attempted willful killing, intentionally causing serious injury to body or health, international terrorism, plundering, intentionally causing damage to property, restriction of people’s freedom and instigating violent crimes.

Other legal proceedings against Barak and other senior members of the Israeli government are in the works.  In 2010 in France, the widows of Cevdet Kiliçlar and Necdet Yildirim, two others executed by Israeli commandos, brought a lawsuit against Barak which he evaded when he was informed of the French lawsuit as he was about to deplane in Paris to attend a weapons expo.

In a case brought in the International Criminal Court (ICC), the ICC prosecutor has ruled that the attack by Israeli commandos upon the Mavi Marmara in the Gaza Freedom Flotilla was a war crime.

Due to political considerations dealing with the State of Israel, the Ministry of Justice of Turkey has delayed sending to Interpol the “red notice” much to the consternation of those seeking justice.

Ann Wright served 29 years in the U.S. Army/Army Reserves and retired as a Colonel. She also was a U.S. diplomat for 16 years and worked in U.S. Embassies in Nicaragua, Grenada, Somalia, Uzbekistan, Kyrgyzstan, Sierra Leone, Micronesia, Afghanistan and Mongolia. She resigned from the U.S. government in March, 2003 in opposition to the Iraq war. She was on the 2010, 2011 and 2015 Gaza Freedom Flotillas and has been to Gaza six times after Israeli attacks on Gaza.

← Secrecy and Hillary Clinton
The More Complex Truth of Benghazi →

9 comments for “Fallout from the Gaza Blockade”