U.S. policymakers view their country as the “exceptional” and “indispensable” global policeman but shut their eyes to how other nations see the world, thus blinding America to emerging problems and possible solutions, as ex-CIA official Graham E. Fuller explains.

All countries do it, promoting their own societies in ideal terms in order to influence others. The U.S. devotes a huge amount of time and money to selling its self-image and a view of the world as seen through American eyes, and perhaps denigrating others as well.

Such “crafted” image-making is hardly exclusive to the U.S. government. The New York Times, for example, supposedly our gold-standard on objective reporting, is heavily slanted when it comes to reporting nearly anything on China or Russia, among other issues. 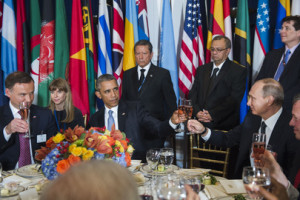 United States President Barack Obama (third from left) and Vladimir V. Putin (second from right), President of the Russian Federation, share a toast at a luncheon hosted by Secretary-General Ban Ki-moon in honor of world leaders attending the general debate of the General Assembly. Also pictured: Andrzej Duda (left), President of the Republic of Poland.

If you recognize the nature of what you’re reading, that’s fine. But if you think you’re getting the full skinny on the world, then it can be dangerous and self-deceiving. As we say in the free market, let the buyer beware.

China and Russia, among others, certainly produce their own state propaganda, often far less skillfully than the U.S., and it more often comes in state-controlled media. The real danger, of course, comes when you start believing your own spin as representing reality around you.

But there can actually be some virtue in reading “propaganda.” (Let’s use a better description for it, promotion of one’s own view of the world, in the effort to bring others over to your view.) The value of reading such material can actually be great, particularly for those interested in international affairs. Certainly when I was at CIA we read a lot of what could be called “foreign propaganda.”

Indeed there was an entire branch of CIA which monitored and published on a daily basis a thick booklet of selected broadcast items from around the world, available by subscription. The Foreign Broadcast Information Service provided an invaluable service. It is now sadly defunct, the victim of short-sighted budget cutting, an operation which probably cost less annually than one fighter aircraft and offered much more.

One virtue of these broadcast items was the nuggets of domestic information from those countries which were otherwise not readily known about, a kind of news coverage. But the greater value was the ability to see how a foreign state viewed itself and the world around it. Propaganda? Sure, in one sense. But the thoughtful reader could fairly soon get a sense of how Russia, China, North Korea, or say Iran, saw themselves. Sometimes you might find a strikingly different interpretation of events that revealed a lot about their psychology and even their likely reactions and behavior down the road.

For the thoughtful statesman and analyst, this was good stuff. It helped explain where other leaders were coming from, what they more or less believed. Their worldview also offered perspectives about how they saw the U.S. Whether we liked it or not, it contained a few revelations about our mutual, and differing, perspectives.

Sadly today, one gets a sense that large elements of the U.S. government, and especially Congress, are quite ignorant of any possible alternative explanations of why other countries see things the way they do, and how they see us. If you’re a small country, such insularity might not matter all that much; when you claim to be world leader such insularity matters a whole lot.

There’s no mystery in this. Successful people often are very perceptive about how others see things and why they speak and act the way they do.

In today’s world, then, there is huge value in looking at what, say, China and Russia say about themselves and how they view us. It helps to remove surprises from negotiations and might even cause us to consider for a second whether there is any logic or even possible truth in how they view us. Or even to reconsider what we are doing.

That’s why it’s useful to have summits, even private conversations between leaders in the hallways of the UN, they get to hear directly how the other leader thinks. If we don’t like what they have to say, maybe it’s doubly necessary to hear it.

So when major speeches or articles appear from other leaders or commentators from countries we don’t like, my old habits kick in. I find I can learn a lot about the texture of international events from reading these pieces. Naturally some writings are more thoughtful than others, but they give me a chance to put myself in their shoes, see the world their way, and maybe anticipate certain kinds of actions and responses.

Some of those perceptions and views we might regard as erroneous, but then perhaps some of our own views might be erroneous. There is no single truth in foreign policy out there, only differing perspectives. There may be some validity to more than one of them.

Case in point: this article from the China Daily, an English language publication that unquestionably reflects Chinese government thinking. The story presents a view of how China views itself, and more importantly, how it views us.

Do I accept the Chinese view as the “accurate” view, the full story of what we, or they, are doing? Of course not; you and I can readily pick a few holes in what the China Daily has to say. Self-serving? Sure, like White House or Pentagon press briefings that need to be taken with a huge grain of suspicion and skepticism as well.

You’ve got to read everything with vigilance and discrimination, including the New York Times. And we in the U.S. have some TV channels dedicated almost entirely to formulation of an American right-wing propaganda view of the world, however remote from reality. But do China and Russia find it important to listen to that discourse? You better believe it.

So I suggest reading the piece as one of many that show how our competitors view themselves, and us. We can all learn a thing or two through the privilege of entering into their mental world and perspective on affairs.

From time to time I may select a few other pieces that help hold a mirror up to ourselves. Any good intelligence analyst reads many of these things with profit. So can you.

6 comments for “Value in Reading Others’ Propaganda”