The great American novelist Mark Twain had a particularly insightful understanding of hypocrisies of the powerful and the bluster of bigots, which would have given him a deep understanding of Donald Trump and his political appeal, writes Michael Winship.

How I spent my summer vacation — part of it, at least. One weekend in August, my girlfriend Pat and I went upstate to visit my sister, also named Patricia, and while there took a field trip to Elmira, New York.

We were on bit of a pilgrimage. Mark Twain, real name Samuel L. Clemens, is buried in Elmira and the three of us decided to visit his grave. For many years, Twain spent his summers at the Elmira home of his in-laws, Quarry Farm, overlooking the Chemung River Valley. 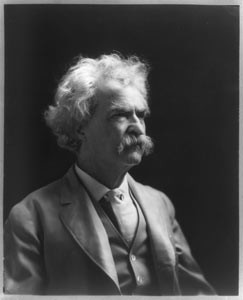 His sister-in-law even built him a small gazebo retreat in which he did much of his finest writing. It is, he wrote, “the quietest of all quiet places” in “an elevation that commands leagues of valley and city and retreating ranges of distant blue hills.”

Twain stopped visiting Elmira after his daughter Suzy’s death in 1896, only to return in 1910, following his death in Redding, Connecticut. His remains were brought to Elmira’s Woodlawn Cemetery for burial. It’s a short drive from the center of town. Twain, his wife, children, son-in-law and only grandchild are all there. Each has a stone marker and in front of Twain’s, fellow writers and devotees have planted their pens in his memory.

There’s a larger monument, too, placed by his daughter Clara. It honors Twain and Clara’s husband, the Russian musician Ossip Gabrilowitsch, with large bronze medallions, each a bas-relief profile. But at the beginning of the year, the tomb was vandalized. Twain’s medallion was pried from the stone. Luckily, the thief was caught. Repairs and restoration of the plaque will take a few more weeks.

Vandals and Mark Twain. The two ideas tangoed in my head and naturally danced me over to Donald Trump. We were having a quiet weekend’s interlude in upstate New York but even there it was impossible to ignore the cacophony of Trump’s verbal vandalism and braying pitch to nativism and bigotry.

Such jingoism was just the kind of ideological humbuggery Mark Twain loved to puncture. Yet he would agree with Trump’s and our, disgust for the current, disheveled and inert state of our governance.

In fact, years ago, historian and author Garry Wills wrote, “To understand America, read Mark Twain. No matter what new craziness pops up in America, I find it described beforehand by him

“What made Twain so prescient?” Wills continued. “Our own persistence in folly, no doubt. But more than that he understood the peculiarly American brand of folly as no one before or after.”

So while it may be too easy to piggyback onto Twain’s prescience, in these disturbed and disturbing times, it’s irresistible, with the understanding that there’s a lot of spurious Twain material out there that never came from him and the knowledge that in some cases what he said and wrote can be as variously interpreted as the Bible or Koran.

Twain was a contributor to the 19th Century magazine The Galaxy, and in it, he claimed, “I shall not often meddle with politics, because we have a political editor who is already excellent and only needs to serve a term or two in the penitentiary to be perfect.” He lied about the meddling part. Lucky for us.

Twain would have sympathized with all who heap scorn on Congress and Washington. As he famously wrote, “Suppose you were an idiot. And suppose you were a member of Congress. But I repeat myself.”

And, “It could probably be shown by facts and figures that there is no distinctly native American criminal class except Congress.” And, “ I never can think of Judas Iscariot without losing my temper. To my mind, Judas Iscariot was nothing but a low, mean, premature, Congressman.”

He believed “public office is private graft,” and nowhere did Twain sink his teeth more deeply into the hypocrisy and greed of Washington and its politicians than in his first novel, The Gilded Age, written with Charles Dudley Warner. The very title gave its name to an era of wretched, wealthy excess by plutocrats who embraced economic inequality, an era we revisit today in our own Second Gilded Age.

So devastating is the book’s portrayal of Washington skullduggery, replete with lobbyists and the superrich on a spending spree, buying up government officials, Twain and Warner originally hoped that Thomas Nast, the political cartoonist who savaged New York’s Boss Tweed and Tammany Hall, would provide the illustrations. Garry Wills called it “our best political novel,” greater than Henry James’ Democracy or John Dos Passos’ USA.

Says Colonel Sellers, the get-rich-quick schemer who’s one of the novel’s central characters, “There is no country in the world, Sir, that pursues corruption as inveterately as we do. There is no country in the world whose representatives try each other as much as ours do, or stick to it as long on a stretch. I think there is something great in being a model for the whole civilized world, Washington.”

But beyond the peccadilloes of the capital and its affluent gatekeepers, Mark Twain feared our baser instincts. Yes, “the political and commercial morals of the United States are not merely food for laughter, they are an entire banquet,” he wrote, but he also feared our reasoning powers “are not above the monkey’s.”

On the one hand, “We are called the nation of inventors. And we are. We could still claim that title and wear its loftiest honors if we had stopped with the first thing we ever invented, which was human liberty.” On the other, “To create man was a quaint and original idea, but to add the sheep was tautology,” a built-in redundancy thrown in by a distracted Creator.

So I thought about which of Twain’s characters would come closest to Donald Trump’s bumptious personality but ultimately rejected the well-to-do wheelers and dealers that populate The Gilded Age. Instead, I decided that in many respects, the character most like The Donald was that of Huckleberry Finn’s dissolute father, Pap.

Even though Pap lusts mostly for liquor and Huck’s loot, a treasure trove back then of $6,000 that today wouldn’t cover Trump’s barber bills, he shares the billionaire’s braggadocio, the propensity for noise, surly resentments and irrational lashings out, especially at minorities.

A good substance-free rant is just Pap and Trump’s style: “Then the old man got to cussing,” Huck recounts, “and cussed everything and everybody he could think of, and then cussed them all over again to make sure he hadn’t skipped any, and after that he polished off with a kind of a general cuss all round, including a considerable parcel of people which he didn’t know the names of, and so called them what’s-his-name when he got to them, and went right along with his cussing.”

Derisively, Pap says, “Oh, yes, this is a wonderful govment [sic], wonderful,” and then explodes at the notion of an educated, free black man. “They said he was a p’fessor in a college, and could talk all kinds of languages, and knowed everything. And that ain’t the wust. They said he could vote when he was at home. Well, that let me out. Thinks I, what is the country a-coming to? I says I’ll never vote agin. Them’s the very words I said; they all heard me; and the country may rot for all me, I’ll never vote agin as long as I live.”

Many Republicans fear Trump’s possible nomination, “increasingly concerned that [his] inflammatory language is damaging the party,” Jonathan Martin wrote in The New York Times, “that his remarks are hardening the tone of other candidates on racial issues in ways that could repel the voters they need to take back the White House.”

Yet if another GOP candidate wins their nod instead, those same Republicans fear that Trump’s voters will stay at home, just like Pap. It is a wretched bed they have made for themselves this last 50 years, a legacy of mongering and misinformation, and with the unlikely Trump of New York, instead of someone from the Deep Red South, the Republicans have managed to achieve a destructive apotheosis of dog whistles and hatred.

“Such is the human race,” Twain wrote back in 1907. “Often it does seem such a pity that Noah and his party did not miss the boat.” Prescient indeed.

Michael Winship is the Emmy Award-winning senior writer of Moyers & Company and BillMoyers.com, and a former senior writing fellow at the policy and advocacy group Demos.

← More Incoherence in Syria Policy
CIA and the Drug Business →