Whenever there’s a terrorist attack even a botched one like last week on a Paris-bound train the debate turns to tightened security and retaliation. But a key part of a realistic campaign to reduce terrorism is to address underlying causes that fuel the rage behind the violence, says ex-CIA analyst Paul R. Pillar.

The foiled attack last week by a heavily armed gunman on a Paris-bound express train has generated a surge of discussion and hand-wringing in Europe about how better to protect against such attacks. There is nothing new about European trains as a terrorist target; an attack against commuter trains in Madrid 11 years ago that killed 191 people was a far more significant event. And the policy challenges involved are hardly specific either to Europe or to trains.

Security for particular types of potential terrorist targets is routinely a topic after even failed terrorist attacks, and protective security countermeasures constitute a large proportion of public measures to counter international terrorism. Nonetheless, a serious and inherent limitation to what can be accomplished on this front is the unlimited number of potential targets. 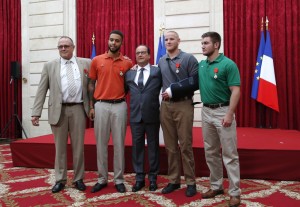 This limitation flows from the very nature of terrorism as the use of violence to elicit a broader political and psychological effect rather than merely to disable the particular target that is attacked. Soft targets can be made harder, but then terrorists will turn to other soft targets.

Commercial aviation, still a juicy terrorist target for several reasons, has been made much harder than it once was, but there are still plenty of trains to go after. And it’s not just transportation; any public place with a lot of people, such as shopping malls, will do.

The vast number of soft public targets means it is beyond the resources of public authorities to protect them at all. And with some targets, substantial protection quickly comes into conflict with normal commerce and everyday life. The sorts of security measures that now surround civil aviation could not practically be applied to mass transit and commuter railroads.

Trends in international terrorism in recent years have featured not only unlimited targets but also unlimited terrorists. All the soft, vulnerable targets in our open societies are vulnerable not only to well-organized groups but also to any individuals, or duets or trios, with a grievance, and if the grievance is political then any violent actions they take are by definition terrorism.

ISIS has grabbed our attention with its land-grabs in the Middle East, but it is focused on trying to sustain its so-called caliphate. Many of the operations conducted in its name, especially the farther one gets from the Middle East, are generated elsewhere with only the ISIS brand name being borrowed. So-called lone wolves are a bigger part of the problem in the West than they would be in Morocco or Bangladesh, and a bigger problem for the West than any attacks there by ISIS.

Counterterrorist measures are still, as they always have been, a matter of shifting odds rather than of being able to eradicate a problem. This is true of security countermeasures, even for potential targets that have been substantially hardened.

One of the few trains in the West that has airport-style security screening of passengers is the Eurostar train that uses the tunnel under the English Channel. One wonders what sort of security vulnerabilities regarding that train were demonstrated when an illegal migrant recently walked almost the entire length of the tunnel before he was caught.

The shifting of odds is also involved in anything that affects the motivations of would-be terrorists. The objective here is to reduce the chance of people being angry and frustrated enough to resort to the extreme of terrorism. The relevant public policies include ones that affect the personal circumstances in which such people live. They also include any policies of Western governments that become the objects of anger.

The shaping of neither of these types of policies commonly bears the label of counterterrorism. They are nonetheless where there is likely to be, over the long run, even greater potential for changing the odds of our soft public spaces being attacked than there is through security countermeasures. The potential also is greater than through offensive kinetic action taken against people who already have crossed the line into terrorism, including action taken broadly against groups or more narrowly against individuals.

With both types of action the severe limitations, as well as counterproductive aspects that can generate more angry people and more terrorism, have been repeatedly demonstrated.

12 comments for “The Missed Lesson on Terrorism”