Between Republican partisanship and Israeli pressure, the ranks of U.S. politicians and pundits opposed to the Iran nuclear deal are growing. But their arguments, including from Senate Foreign Relations Chairman Corker, remain logically flimsy and counter-factual, says ex-CIA analyst Paul R. Pillar.

Senator Bob Corker, chairman of the Senate Foreign Relations Committee, has long given us hope for reasonableness even when he and we have been surrounded by partisan rabidity and a lack of reason. Corker was one of the few Republican senators to refrain from signing the Tom Cotton letter that lectured the Iranians on how they cannot count on the United States sticking to any agreement that Iran may reach with it.

When others in Congress were looking for ways to use new sanctions to torpedo preemptively any agreement on restricting Iran’s nuclear program, Corker was working on legislation to provide structure to Congressional review of any agreement that emerged from the negotiations. The initial version of his bill was studded with poison pills, but Corker showed the flexibility, working with acting ranking Democrat Ben Cardin, to revise it into something balanced enough that it was enacted with broad bipartisan support and signed by President Barack Obama. 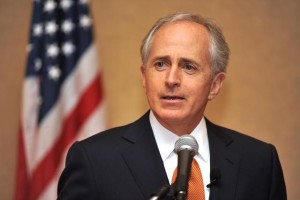 It has been a fairly safe bet for some time that Corker would eventually oppose the nuclear agreement; with Jeff Flake, the only Republican senator who was possibly in play on the issue, having announced his opposition the other day, the GOP ranks in the Senate will be completely closed.

But still one might hope to see signs of well-informed reasonableness, especially as a welcome contrast with the bombast of the presidential campaign, in which those vying for primary votes from the party base are striving to outdo each other in denouncing the agreement with comparisons to genocidal ovens and the like. We will have enough to worry about concerning the future of the agreement and thus the ability to restrain Iran’s nuclear activities if one of those candidates, laden with such campaign baggage, makes it to the White House.

It thus is sad, but also revealing, to see how utterly weak are Corker’s announced reasons for opposing the agreement, at least those he can fit into the space of an op-ed. Well-informed reasonableness this is not.

Corker says that rather than ending Iran’s enrichment program, the deal “industrializes” it, whatever that means. Ending Iranian enrichment of uranium altogether was never feasible. The agreement severely restricts both the level of enrichment and the amount of enriched uranium Iran can stockpile.

Maybe “de-industrialization” is a term that could more aptly be applied to what the agreement accomplishes on that score compared to what the Iranians had been doing before the preliminary agreement was reached. In observing the terms of that agreement, Iran already has substantially walked back its program from what was taking place earlier.

The senator speaks of an inspection process that is “deeply flawed,” with “unorthodox arrangements” and “secret” agreements with the International Atomic Energy Agency. In fact, the negotiated inspection arrangements are consistent with the Additional Protocol for IAEA inspections, and they conform to the usual practice of having individually negotiated procedures that are kept confidential between the IAEA and the member state.

The only respect in which the procedures are “unorthodox” is that they are more extensive and more intrusive than any other nuclear inspection arrangement, the most extensive and intrusive that any nation has ever agreed through negotiation to place its own program under. The constant and detailed monitoring of declared facilities is supplemented by inspections of any other suspect Iranian facilities through carefully drafted procedures that ensure that if there is any disagreement, the Iranians get outvoted and the facility gets inspected.

Corker then gets into non-nuclear issues in ways that are nothing short of strange. He writes that “we will be relying on Iran to help achieve our goals in Iraq, Syria and perhaps elsewhere.” So is he saying it would be better if Iran not help us to achieve our goals in such places?

He does say “this abrupt rebalancing could have the effect of driving others in the region to take greater risks, leading to greater instability.” The parties to the nuclear agreement have, throughout the negotiation, all stayed focused on the nuclear issue itself, and any rebalancing that results will hardly be “abrupt.” It also is hard to see how restricting what Iran can do with its nuclear program produces instability.

Besides, if other parties in the region are going to engage in risky behavior that is a problem with them, not with Iran, and such behavior needs to be addressed directly. Corker tries to tie this confused set of issues back to the agreement by saying that Iranian awareness of all this “helped the regime continually erode the deal to its benefit.” Erode from what?

The obligations in this agreement, other than reducing the punishment of Iran, are all obligations for Iran to fulfill. The starting point, before negotiations began, was an Iranian nuclear program subject to no restrictions at all beyond Iran’s basic obligations under the Nuclear Nonproliferation Treaty.

Corker tries to cast a general aspersion on the negotiations by stating that “since negotiations began in earnest” all sorts of nasty things have happened in the region that involve Iran in some way: that Iran has “doubled down on its support of Syrian dictator Bashar al-Assad,” and “cemented Hezbollah as an expeditionary shock force” while lots of people have died in the Syrian civil war and ISIS has been doing bad things in Iraq.

Nothing whatever is provided in the way of either evidence or reasoning that any of this has anything to do with either the negotiations or the agreement that emerged from them. Besides the absence of logic and evidence, this blurt contradicts Corker’s use in the next paragraph of the now shop-worn theme that sanctions relief will give the Iranians “hundreds of billions of dollars”, a gross overestimate, to do those proverbially nefarious things in the region.

If that theme were valid, i.e., that Iran’s regional policy will be dictated by its available financial resources, then we should have seen a reduction in Iranian regional activity when the sanctions began to bite, and a further reduction when oil prices plunged. But Corker, in his effort to suggest that bad things happen whenever one negotiates with Iranians, is telling us that the opposite has occurred.

In fact, if there is any pattern at all in Iranian regional activity over the last several years it is that the activity is reactive, with the Iranians responding to civil wars or the emergence of extremist mini-states or and any other events that affect Iranian interests.

Corker winds up by talking about “leverage” as if the more sanctions that are in place, the more leverage we have. That represents a fundamental misunderstanding, or misrepresentation, of leverage and where it comes from. Leverage comes from the ability and prospect to reward someone if they do as we want or to punish them if they were to act contrary to our wishes.

The prospect of sanctions relief is what gave our side the leverage to induce Iran to agree to place its nuclear program under extraordinary restrictions. The prospect of re-imposition of sanctions will be one of the incentives (though not the only one) for the Iranians to abide by their obligations in the agreement. Sanctions per se give us no leverage. The belief that sanctions will stay in place no matter what gives Iran no incentive to concede, to comply, or to do anything else in accordance with our wishes.

Bob Corker has an important role to play in Congressional oversight of implementation of the nuclear agreement, especially assuming continued Republican control of the Senate and thus continuation of Corker’s chairmanship of the foreign relations committee. He can still play that role positively and constructively. He has been responsible enough and careful enough not to tie himself in the kind of constraining rhetorical knots that several of the presidential candidates have.

19 comments for “The Flimsy Case Against Iran-Nuke Deal”