Despite Israel’s reliance on a dominated U.S. Congress as a last line of defense for its bomb-bomb-bomb-Iran strategy, other regional and global forces are moving quickly to reshape the Middle East’s geopolitical reality in a more positive way, as ex-CIA official Graham E. Fuller discerns.

It is risky to try to discern longer-range trends in the Middle East based on a few short-term developments. Nonetheless, I can’t resist finding some small shards for cautious optimism in the events of the past few weeks.

-Syria: Washington’s love-hate relationship with Moscow depends on the geography: in Europe it is ideological and poisonous, in the Middle East it seems pragmatic and potentially productive. Lately Secretary of State John Kerry (who has shown himself to be far superior to his predecessor Hillary Clinton) has been working to find some common ground with canny Russian foreign minister Sergei Lavrov. Syria is the central topic, but the implications and regional fall-out potentially extend far beyond Syria. 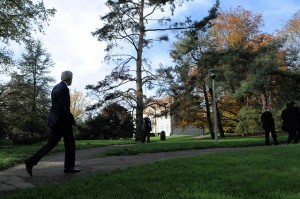 President Barack Obama has been slowly moving towards recognition that there are more urgent issues than simply getting rid of Syrian President Bashar al-Assad. Eliminating the Islamic State (or ISIS} and denying victory to the Islamist extremists on the ground in any post-Assad Syria are more important. So is the need to preserve some Syrian unity if possible, and to stem the vicious (particularly Saudi-driven) sectarian struggle across the entire region.

There may now be hints of a rough grand bargain emerging among the U.S., Russia, Iran, Turkey and Saudi Arabia that would foresee some kind of new coalition government in Syria representative of major national forces that would ensure the majoritarian Sunni population would be fully represented; the now ruling minoritarian Alawis would be granted a significant place at the table. Many Alawis, an offshoot of Shi’a Islam and the religion of Assad and other Syrian officials, fear loss of power will lead to their destruction. But they cannot hold on forever and they know that, so perhaps better to strike a deal now than flee for the hills later.

Assad would have to go in any case; the Alawis will likely be willing to throw him under the bus if the welfare of the overall Alawi community can be preserved.

Iran: Is it too early to discern a possibly greater flexibility emerging in Tehran on the heels of the historic deal between the U.S./5+1 powers and Iran on the other? For sure, the deal has not yet been consummated in either Tehran or Washington, but in one sense that is irrelevant: the world is beginning to act as if such an agreement is now a fact, and countries are acting accordingly.

Might Tehran now feel that, no longer cornered, it can have greater confidence to act in more a measured and open fashion? Or rather, as some skeptics would have it, will Iran simply pocket the gains and step up the intensity of narrowly conceived interests in the region? I’m betting on the former, it’s smarter for Iran. (Although enlightened self-interest is a rare commodity much of anywhere these days; hawks are alive and well in both Tehran and Washington.)

I believe Iran can act with broader regional interests in mind that are not primarily sectarian as long as the sectarian label is not forced upon it by Sunni fanaticism. Geopolitical differences will indeed exist, but need not, should not, be sectarian in nature, which is only a lose-lose game for all.

Turkey may be climbing down from President Recep Tayyip ErdoÄŸan’s obsessive and ruinous policy of overthrowing Assad at all costs. It is dismaying however that Erdogan may be taking this as license to undo his previous hard-won diplomatic gains with the Kurds and the PKK of past years.

Russia does not seem to be driven by a zero-sum contest with Washington in the Middle East, wherein one’s gain is the other’s loss, unlike in Ukraine, Moscow’s front yard. Its interests in the region are no less than American. Russia’s key goal in the Middle East is to maintain its role as an important regional player (which it has been for centuries).

Neither Russia, nor China for that matter, will tolerate further U.S. efforts at geopolitical domination of the Middle East, especially based on U.S. unilateral military solutions. When Moscow is given a place at the table, the results are likely to be productive, especially given Moscow’s own clout within many states, including Iran.

Saudi Arabia has its hands full with its unwise and destructive policies in Yemen and a fictitious “Sunni coalition”; it has every good reason now to begin a quiet and unspoken rapprochement of sorts with Tehran. It cannot block or defeat Tehran’s influence in the region, especially after the international nuclear agreement, and Riyadh realizes it must come to terms with it.

This is not all that surprising, Saudi Arabia has never liked Iran even before the Iranian revolution, but has regularly managed periodic, grudgingly correct relations with it for many years. An eventual deal must be reached in the fight for power in Yemen, and Iran is likely to be content with any deal that does not exclude now dominant Houthi forces. Saudi Arabia also shares with Iran (among others) a desire to put an end to ISIS.

Indeed, Riyadh has now lost hope that it can look to Washington for carte blanche support to (unrealistically) exclude Iranian influence from the region. It now needs to act more prudently; it has therefore (wisely) decided that better ties with Moscow represents useful insurance. Here Moscow functions as another major power pushing Riyadh towards greater realism and less religious extremism. Washington has nothing to lose by this (except already dwindling geopolitical monopoly over the Middle East) and much to gain.

Other Gulf states are generally more pragmatic about living with Tehran than is Riyadh (except for the precarious minority Sunni rulers over largely Shi’ite Bahrain). Oman distances itself greatly from Riyadh and has long enjoyed cordial ties with Iran, useful even to the U.S. as a conduit to Tehran in the past.)

Egypt remains a non-player in virtually all respects.

Iraq: there are a few small but encouraging signs that Iraqi Prime Minister al-Abadi recognizes the need for a more broadly based political base that incorporates greater Sunni representation; in this he is backed by none other than the top cleric of the Shi’ite world, Grand Ayatollah Sistani as well as Shi’ite militia leader (but also strong Iraqi nationalist) Muqtada al-Sadr.

The common thread here is the newly emerging Iran, a reality which regional states can no longer block and indeed, will need to realistically deal with it; the consequences need not be all negative and can lead to a diminution of tensions and sectarianism.

If any of these trends represent tentative signs of a new face in Middle East geopolitics, then there are grounds indeed for more optimism than the region has warranted for many years.

Graham E. Fuller is a former senior CIA official, author of numerous books on the Muslim World; his latest book is Breaking Faith: A novel of espionage and an American’s crisis of conscience in Pakistan.” (Amazon, Kindle) grahamefuller.com

← Pope Francis’ Appeal for the Future
Escalating the Anti-Iran Propaganda →

5 comments for “Mideast Glimmers of Hope”