Official Washington often exacerbates foreign conflicts by shoving them into misshapen narratives or treating them as good-guy-vs.-bad-guy morality plays, rather than political disputes that require mediation. The problem is particularly tricky with “terrorist” groups, writes ex-CIA official Graham E. Fuller.

I can’t believe that I’ve been outflanked on the Progressive Left by Fareed Zakaria! Hints of negotiation with the Islamic State (also called ISIS)!

In a Washington Post op-ed, Zararia cited Afghan negotiations with the Taliban and questioned whether similar talks might be useful even with ISIS: “After all, this is a particularly brutal and murderous group, but it is successful largely because it has tapped into the fears and rage of disempowered Sunnis in Iraq and Syria. That is a political grievance that can only be addressed politically.” 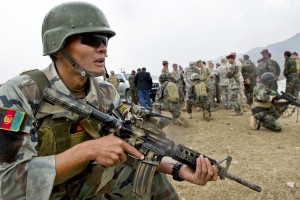 I’ve got a lot of respect for Zakaria, he generally works within the outer limits of the establishment envelope, just enough to nudge along a lot of establishment readers with new ideas without losing them. Those of us working often outside that envelope run the risk of losing readers, or never even gaining their ear in the first place.

Yet what is Zakaria saying? He makes the very important point that many of us have been making for a long time: we have to deal with political realities by talking to people we don’t like. But it’s good he’s now saying it, maybe the idea is going mainstream, at last.

Zakaria muddies the argument a bit, though, by employing the catch-all term “terrorists.” Of course terrorists exist, but the world has spent the last several decades (if not longer) in debating just what a terrorist is. All kinds of prestigious organizations including the UN have failed to come up with a consensus on the meaning of the word.

We end up having to revert to the old line that “one man’s terrorist is another man’s freedom fighter.” In short, we like some terrorists, but not others, it all depends on whether they’re fighting for the “right” cause (our cause), or the “wrong” cause. It’s a subjective call.

So yes indeed we should talk to many of the groups that are conveniently termed “terrorists” in the West. Many of them in fact are far more than just terrorists, they are political groups with political aims that also deploy militia wings who use violence against their enemies.

The fighters for Palestinian liberation from Israeli occupation spring first and foremost to mind. But because they are fighting Israel they are automatically beyond the pale of any permissible discussion in the US. But the PLO, Fatah, and even Hamas are serious political organizations representing hard-core Palestinian aspirations, divided only by how to get there, and under whose leadership. Even thoughtful Israelis know that one day they will have to negotiate with them, indeed they have already done so behind the scenes.

Same goes for Hizballah in Lebanon, the paramount organization representing the Shi’ites who are the largest single religious group within Lebanese society. Hizballah helped bring the once-detested and oppressed Lebanese Shi’ites foursquare onto the political scene in Lebanon. If you want to deal with Lebanese Shi’a you have to talk to Hizballah, all Lebanese do. It has a huge official, public presence, while all the while maintaining formidable militia capabilities.

The list of movements goes on and on, groups that used guerrilla or terrorist operations as the way to put themselves on the political map. That includes many of the founders of Israel. Such guerrilla movements frequently evolve into mainly political movements: the PKK in Turkey, Sinn Fein in Ireland, Tamil Tigers in Sri Lanka, the Taliban, Chechens, Uighur liberation movements, the Muslim Brotherhood in various places, the Zapatistas in Mexico, FARC in Colombia, and other Latin American groups representing the “struggle” of disadvantaged classes or ethnic/religious groups.

And most states say they will never negotiate with their enemies but end up doing just that.

But Zakaria now raises into the intriguing possibility that we may eventually end up having to negotiate even with ISIS. (Never mind that we can’t even talk to Hamas yet.)

In the past I have been hesitant to describe ISIS as primarily a political movement, yet it is of course very political: it possesses an ideology, an info network, an agenda, crude administrative policies, and controls a certain (shifting) territory.

But how do we determine just whom ISIS represents? Maybe the many angry Sunni Iraqis who feel excluded from power in Shi’ite-dominated Baghdad? For sure. Yet many other Iraqi Sunnis may be equally disgruntled but for them the ISIS phenomenon is beyond the pale.

Or does ISIS represent angry fundamentalist Syrian Sunnis fighting to overthrow President Bashar al-Assad? In part, yes, but ISIS is equally interested in destroying moderate Sunni militias. And we know ISIS also attracts some young alienated western Muslims who seek adventure for a nominally grand Islamic cause, but they are mainly transient adventurers and only number a few thousand.

So I’m not sure I’m yet willing to grant ISIS the coherence of a political movement that would call for negotiating with it. There is no denying that it plays off deep discontents and ideological yearnings for “true Islam” which can purportedly help bring a better political order to the Middle East. But is ISIS the movement to do it?

Nor am I convinced that ISIS represents a coherent large body of people who are truly dedicated and committed to the ISIS cause. If ISIS were to be decapitated, would the movement persist anyway, as would Hamas or Hizballah or the Taliban? Questionable.

That ISIS plays off huge widespread legitimate historical and contemporary grievances is beyond doubt. So did Boko Haram, at least originally. Certainly al-Shabab in Somalia does. But the sweeping nature of ISIS public violence and inflexible intolerance, its lack of recognition by any state including self-affirmed Islamic states (Pakistan, Sudan, Iran, Saudi Arabia, etc.) robs it of serious legitimacy.

But who knows, maybe this is only an early stage of the ISIS movement. Maybe it will morph into something more coherent, more acceptable in the eyes of so many in the region. But I think it is still far from getting there, at least yet. It may gain some more battlefield successes, but that is not enough.

So I applaud Fareed Zakaria in explaining to the mainstream public the need for negotiation with “terrorist” organizations, most of whom represent deep-seated political causes. It’s just that I’m not sure ISIS falls into that category. But this issue is indeed worthy of further debate.

← Struggling for Women’s Sports Equality
The Mess that Nuland Made →