Exclusive: Some brave white Southerners, including the son of segregationist Strom Thurmond, have spoken out against Confederate symbols like the battle flag, but many whites still react with fury at calls for retiring those symbols and other honors bestowed on Confederate leaders, writes Robert Parry.

Whenever there’s a suggestion that the Confederate battle flag should be retired to museums or that the name of Confederate President Jefferson Davis should be removed from major highways, there comes the predictable accusation that such moves amount to “rewriting our history” but nothing could be further from the truth. It’s a case of recognizing the real history.

What America needs perhaps now more than ever is a serious reexamination of its true history, not the pleasant palliatives offered in textbooks approved by Southern-dominated boards appointed by right-wing politicians. Under such benighted tutelage, popular U.S. history as taught in public schools has become primarily a brainwashing exercise, an ideological foundation for “American exceptionalism,” the jumping-off point for today’s endless wars. 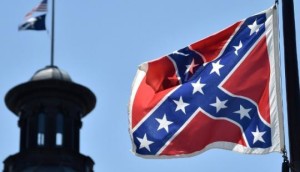 Confederate battle flag flying on the grounds of the South Carolina Statehouse.

Plus, given America’s continuing racial tensions, it’s particularly important to throw away the rose-colored glasses used to view the issues of slavery and the antebellum South, happy scenes of elegantly dressed white people lounging on the veranda of a stately plantation house, sipping mint juleps while being cooled by fans waved by contented and placid Negroes, a white supremacist’s happiest dream.

A June 24 column by Harold Meyerson cited a recent book, The Half Has Never Been Told  by Cornell University history professor Edward Baptist ,that explodes the enduring white Southern myth of the kindly and beneficent plantation. Baptist argues that even the word “plantation” should be tossed into the trash bin of historical euphemisms, replaced by the more accurate phrase “slave labor camp,” albeit one with a large, pretty house in the center.

“Torture” is also a word that should apply, Baptist argues, with African-American slaves routinely whipped for falling short of their production quotas. This behavior was not just common among the most ignorant of Southern slaveholders but was a practice employed even by Thomas Jefferson.

According to documents at Monticello, Jefferson had slave boys as young as 10 whipped. In another important book that strips away the excuses employed to ameliorate the evils of slavery, Master of the Mountain: Thomas Jefferson and His Slaves by historian Henry Wiencek disclosed a plantation report to Jefferson explaining that his nail factory was doing well because “the small ones” ages 10, 11 and 12 were being whipped by overseer, Gabriel Lilly, “for truancy.”

Jefferson and other slaveholders in the older slave states like Virginia, where the soil had become over-farmed and depleted, also found financial salvation in breeding slaves for the newer (and even more brutal) slave states of Georgia, Alabama and Mississippi.

Jefferson even calculated that a fertile female had a higher financial value than a strapping male in the fields, all the better to help him pay for his extravagant lifestyle and cover his mounting debts. (According to Wiencek’s book and many other accounts, Jefferson also personally contributed to the breeding process by imposing himself sexually on his female property.)

Baptist’s book provides an overview of the slave economy as more than 800,000 slaves from the Mid-Atlantic region were sold to the Deep South’s cotton planters who employed even a crueler system than in Virginia and Maryland. Slaves often were forced to travel by foot and in chains and worked under the constant “threat of torture.”

Even after slavery was outlawed by the Thirteenth Amendment at the end of the Civil War, Southern whites refused to accept their guilt in the atrocities inflicted on African-Americans. Many whites fancied themselves the victims of “Yankee aggression” as they replaced slavery with another grotesque system, Jim Crow segregation often enforced by lynching blacks.

Around 1920, at the height of Jim Crow and the Ku Klux Klan, the Daughters of the Confederacy honored Confederate President Jefferson Davis, who before the war had been a prominent Mississippi slaveholder, by naming major roadways in the South after him, including stretches of Route 1 in Arlington, Virginia, just outside Washington, D.C.

That roadway skirted some historic African-American neighborhoods settled by slaves freed by President Abraham Lincoln’s Emancipation Proclamation in 1863. Many ex-slaves escaping the Confederacy ended up in a refugee camp called Freedman’s Village not far from the current site of the Pentagon.

During the Civil War, the area also was the location of Camp Casey, a training base for U.S. Colored Troops who then marched south to fight to end slavery. [See Consortiumnews.com’s “The Mystery of the Civil War’s Camp Casey.”]

Under orders of Confederate President Jefferson Davis and his War Department, captured black Union troops were not to be treated as soldiers but rather as slaves in insurrection, meaning that they could be executed or put into slavery regardless of their pre-war status. In several battles late in the Civil War, surrendering USCT solders were murdered, apparently including some of the soldiers from Camp Casey at the Battle of the Crater.

So, the message of Jefferson Davis Highway was always a warning to African-Americans that they were never too far from the hand of white power. The message of Southern white defiance was repeated in 1964 when Jefferson Davis’s name was added to a stretch of Route 110 near the Pentagon as a Virginian riposte to the passage of the Civil Rights Act.

This fury of white victimhood has been on display again in recent years with the hysterical conspiracy-mongering about President Barack Obama’s birthplace, the Republican Party’s assault on voting rights, the examples of police brutality targeting blacks, and the resurfacing of violent white supremacy as in the nine murders at the historic Emanuel African Methodist Episcopal Church in Charleston, South Carolina.

After the Charleston church massacre on June 17, some white politicians did step forward and renounce the South’s long history of racism, slavery and segregation. State Sen. Paul Thurmond, son of longtime segregationist Gov. and Sen. Strom Thurmond, joined in calling for the removal of the Confederate battle flag from South Carolina’s Statehouse grounds.

“I am aware of my heritage, but my appreciation for the things my forebears accomplished to make my life better does not mean that I must believe that they always made the right decisions,” Thurmond said. “And for the life of me, I will never understand how anyone could fight a civil war based in part on the desire to continue the practice of slavery.”

But other white Southerners continued to play the “we’re the real victims here” card or to make up endless excuses for slavery and segregation. Some claimed to be simply standing up for “history” by defending the symbols of the slave South. [For a sample of these attitudes, see comments to Consortiumnews.com’s “Confronting Southern ‘Victimhood.’”]

In Arlington, where I had urged the County Board to petition the state legislature to remove Jefferson Davis’s name from Route 1 and Route 110, there was an angry backlash to the idea from some county residents as well as support from others. One group recommended that, in Virginia, Davis’s name be replaced by the name of African-American tennis player Arthur Ashe, who unlike Davis actually came from Virginia.

But resistance to the idea continued. On July 2, Consortiumnews.com’s assistant editor Chelsea Gilmour, who was the author of the article about the training of U.S. Colored Troops at Camp Casey, posted an online petition to change the name of Jefferson Davis Highway to a Facebook group page, “I grew up in Arlington, VA,” which has nearly 13,600 members who mostly share old pictures of Arlington, talk about shops that used to exist, and share memories from their time in Arlington.

However, when the petition was posted, Gilmour said, “Within seconds, a tidal wave of comments began appearing, generally along the lines of: ‘Are you kidding?!,’ ‘I will not sign this,’ ‘Why are you trying to rewrite history?!,’ ‘This is the history of Arlington and the South and we can’t change it.’ Additionally, a number of personal insults were directed towards me. When [one commenter who had responded ‘Idiot!’ was] asked by another commentor why his previous comments had been so personally disrespectful towards me, he replied, ‘This is an attack on my Arlington, my Virginia, my South!’”

Taking Down a Petition

Then, there were demands that the petition be removed from the Facebook page. “Within 45 minutes of posting the petition, it had been removed by the administrator of the page,” Gilmour said. “The hateful reaction from a county which has always prided itself on being ‘liberal’ and ‘open to diversity’ was surprising and disheartening.”

When another person posted the petition separately, it was immediately removed again.

This hostility and close-mindedness have been characteristics of many white Southerners for generations. Rather than acknowledge the historic evils of slavery and segregation and do whatever they could to make amends to African-Americans too many white Southerners and racists from other parts of the United States have wallowed in their own delusional victimhood.

Instead of confronting the real and ugly history, they have devised a fictional one that is reinforced by the many symbols of the Confederacy, from the many statues of Confederate generals to the Confederate battle flag (now waved as an international symbol of white supremacy) to the honors given to Confederate President (and Mississippi slaveholder) Jefferson Davis.

It is also not an affront to history to recognize the evil realities of history. Even in the Soviet Union after the crimes of Josef Stalin were exposed the government stripped his name from the city of Stalingrad, despite that city’s enormous historical importance as a turning point of World War II. The renaming of the city was an acknowledgement of a very dark history. But, so too, is the history of American slavery.

When President Barack Obama went to Charleston on June 26 to deliver the eulogy for one of the massacre victims, State Sen. Clementa Pinckney, Obama read and then sang words from the hymn “Amazing Grace.” Why his choice was so appropriate was that the lyrics were written by Englishman John Newton, an Eighteenth Century slave trader — “a wretch like me” — who repented for the evil that he had helped inflict.