Exclusive: In an opening volley of a possible clash between two well-to-do political dynasties, Jeb Bush challenged Hillary Clinton by releasing more than three decades of tax returns,  both to quiet criticism of his own past business dealings and to highlight Clinton’s reputation for secrecy, writes Chelsea Gilmour.

Jeb Bush is campaigning on a platform of transparency. Or so he says. On June 30, he released 33 years of tax returns on his website, more than any presidential candidate in history. The only other presidential candidate to come close was Bob Dole in 1996 who released 30 years’ worth. This unprompted move has raised eyebrows from some observers and “attaboys” from others.

Bush calls it “the spirit of transparency” that compelled him to release the returns. But, given Bush’s sometimes-dubious business background, it is hard to tell if it’s transparency he is concerned with or if he is simply trying to nip criticism of his past business dealings in the bud. 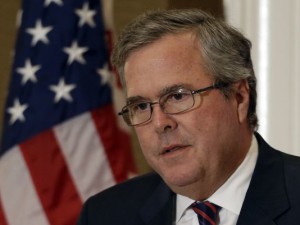 Bush has never been bashful about announcing his desire to make lots of money — or about using his family name to secure financially rewarding positions. In 1983, he was famously quoted by a Miami News reporter saying, ”I’d like to be very wealthy, and I’ll be glad to let you know when I think I’ve reached my goal.” [For the history of his business dealings, see Consortiumnews’ “Jeb Bush’s Tangled Past”]

And, it appears from his tax returns that he has done better money-wise than many thought. Most estimates had put Bush’s wealth at between $8 million and $10 million, but the newly released data suggests that he is worth between $19 million and $22 million, a huge jump from when he left the Florida governor’s office in 2007, at which point his wealth was disclosed as $1.3 million. In 2013 alone, Bush brought in a total of $7.4 million.

The June 30 release shows that his accumulation of wealth is largely due to his work in the banking sector, in investments through his companies, Jeb Bush and Associates and Britton Hill, and from his numerous paid public appearances. Bush puts his average annual speech income as $1.1 million.

But a curiosity from his income-tax filings was his payment of relatively high tax rates. Over the years he has had an effective tax rate of 36 percent, although it crept up to 40 percent in 2013. Bush said, “In my case, I paid the government more than one in three dollars that I earned in my career. Astounding.”

According to the Wall Street Journal, “Mr. Bush paid a higher rate than most Americans because the bulk of his earnings were reported as ordinary income instead of investment income or income from private equity, which are both taxed at a lower rate.” Whether it was intentional on Bush’s part not to seek a better tax break for political reasons is open for conjecture.

As Joseph Thorndike, a tax historian at newsletter Tax Analysts, told the Journal, “‘It’s either poor tax planning or very good political planning,’ Mr. Thorndike said, referring to the overall tax rate. ‘It’s surprising to me that a guy involved in partnerships and LLCs hasn’t been able to structure his affairs more tax efficiently.’” Surprising indeed.

Additionally, the returns show an annual charitable giving averaging 1.5 percent of annual income. In dollars, the total amount given to charity since leaving the governor’s office in 2007 was $739,511. For comparison, “In 2011, Romney, who is much wealthier than Bush, donated more than 29 percent of his income to charity [mostly to the Mormon Church]. The Obamas donated 14.8 percent last year,” according to Bloomberg Politics.

Regardless of Bush’s intentions, the release was a smart political move for a few reasons. Bush has received a lot of criticism for his past business dealings, including accusations and indictments of fraud against former business partners. Releasing this volume of financial information is a good way to appear “clean” and unconcerned about troublesome business entanglements. He underscores the idea that he has nothing to hide.

Another reason it’s smart is to negate any comparisons to Mitt Romney. Bush has been compared to Romney for his work in private equity and investment, not a desirable comparison considering that Romney’s lack of financial transparency was a major Democratic attack line during the 2012 campaign. Romney disclosed only two years’ worth of returns (2010 and 2011) and did not release them until September 2012 after much pressure from critics. Bush’s early and extensive disclosure distances him from those comparisons.

The returns show how much Bush has paid in taxes to the federal government over the years, approximately 36 percent. Last year, Bush’s rate inched up 40.1 percent.

As Bloomberg Politics pointed out, “The 40.1 percent rate is more than double what President Barack Obama paid in 2014 and nearly triple the rate that Mitt Romney, the 2012 Republican presidential nominee, paid in 2011.” It is also 6 percent more than Hillary Clinton, who pays 30 percent, thus establishing Bush’s credibility in saying he has not shied away from paying “his fair share.”

Indeed, Bush did not miss the opportunity to draw a distinction between himself and his opponent, saying, “One fun fact I learned in this process: I have paid a higher tax rate than the Clintons even though I earned less income.”

Other than Carly Fiorina, who provided two years’ worth of tax returns in June, Bush is the only candidate to release his tax returns thus far. His move ups the ante for other contenders (especially Clinton), increasing pressure on them to release their returns for multiple years.

Bush also took the opportunity to call for tax reforms, saying “It’s time for a flatter, fairer tax code. The labyrinth of rules and special interest carve outs need to go. One thing you can count on if I’m president is that it will finally be addressed.”

Later this year, Bush plans to release his 2014 filing in addition to the personal financial disclosure that is mandatory for anyone seeking the presidency. Those documents will provide further understanding of his financial investments and the sources of his income.

Chelsea Gilmour is an assistant editor at Consortiumnews.com. She also wrote “The Mystery of the Civil War’s Camp Casey.”