The massacre of nine black churchgoers in Charleston and a rash of arson at other black churches across the South show that despite conservative self-serving claims and liberal wishful thinking about racism becoming a thing of the past, much more work needs to be done, says Lawrence Davidson.

On the evening of June 17, a 21-year-old white man by the name of Dylann Roof walked into an old and famous black church, the Emanuel African Methodist Episcopal Church (AME) in Charleston, South Carolina, where a Bible study group was underway. Roof sat in on the class for an hour before allegedly pulling out a .45 caliber handgun, announcing that black people were ”taking over our country. And, you have to go,” and shooting 10 of the 12 people in the study group, nine of whom died.

It should be pointed out that at 21 years of age Roof presumably doesn’t have a fully developed pre-frontal cortex (which, in part, means his risk-aversion impulse is not fully developed) – a fact that is likely to do as little good in court for him as it did Dzhokhar Tsarnaev (also 21) in his Boston Marathon bombing trial. 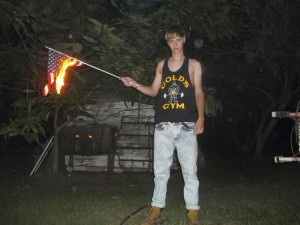 It did not take long for the authorities to identify and apprehend Roof. It turned out that he is a thoroughgoing racist with delusions of starting a second Civil War. He also had a thing for flags. Among the Facebook-posted pictures of Roof that soon surfaced were ones showing him with the flag of apartheid South Africa and the flag of white-ruled Rhodesia. Both of these are reported to be used as symbols of white supremacy in the U.S. And, there is the picture of him, with his handgun displayed, with the Confederate battle flag – the same flag that flies on the grounds of the South Carolina statehouse.

By the day after the shooting the issue for the media was no longer Dylann Roof (who had confessed to the murders, according to police). The issue was whether or not the Confederate battle flag on the statehouse grounds should be removed. For much of the country, the flag was a symbol of the racism that had moved Roof to commit the massacre.

As Nikki Haley, South Carolina’s Republican governor, stated, the flag is a “deeply resented symbol of a brutally offensive past,” and literally overnight, the AME massacre galvanized most of the country to show support for the victims by demanding the flag’s removal.

But it wasn’t going to be that easy. It turns out that many white citizens of South Carolina and beyond don’t see the flag as a symbol of a “brutal past,” much less the symbol of the nine dead people shot down inside the Emanuel AME Church. No. They claim that flying the battle flag simply honors their ancestors who fought in the Civil War for the cause of “states’ rights.” Based on this interpretation, Dylann Roof got it wrong when he sported that handgun along with the battle flag.

Well, most of the African-American population, along with many American whites, think this ancestor story is a rather poor ploy. Honoring one’s ancestors who fought in a lost cause to sustain the institution of slavery (which is why states’ rights were important to the Confederate South) is a bit weird in today’s cultural environment, but one can show such respect in the privacy of one’s own home or even at a veterans center.

However, making it an obligation of the state (in this case South Carolina) is downright dangerous because what you have is half the population commanding the government to pay homage to those who fought to maintain the enslavement of the other half. From a socio-political standpoint, that homage validates the historic actions of those ancestors i.e., fighting to maintain a slave society thus possibly encouraging their descendants (like Mr. Roof) to mimic them. This is just asking for trouble, and on the evening of June 17, South Carolina and the rest of us experienced a horrific example of that trouble.

Why Do Dylann Roof’s Exist?

The Civil War ended over 150 years ago. So one can reasonably ask why Americans are still dealing with this issue of racism? Why is it that, as President Barack Obama said, shortly after the murders, that “slavery still casts a long shadow” on American life? There is no shortage of those who recognize that racism is still deeply ingrained in U.S. culture, but there are few suggestions as to why that is and what can be done about it.

That being the case, I thought I might revive my thoughts on these questions ones originally posted in March 2013 in an analysis entitled “Civil Rights Takes a Hit.” It was written on the occasion of the Supreme Court’s consideration of an Alabama suit to rescind Section 5 of the Voting Rights Act, which allowed the Justice Department to review any changes in voting procedures in areas of the country traditionally tainted by racism.

Here are some of the points I made in that essay:

,Cultures can evolve over centuries, yet once their major parameters are set, they have remarkable staying power. The notion that such parameters can be reversed in, say, 48 years (counting from the 1965 Voting Rights Act) is naive at best.

,Why would that be the case? A good part of the answer is that a culture of racism shaped the way of life, particularly in the southern United States, for hundreds of years. This culture was only briefly interrupted by the Civil War. After that war, there followed a period known as Reconstruction, when the U.S. Army’s occupation of the South interfered with ingrained racist practices. But Reconstruction lasted only a brief 12 years, until 1877.

Thereafter the South reverted to racist ways under a “legal” regime commonly known as “Jim Crow.” That lasted until the Civil Rights movement of the 1960s. Subsequent Republican administrations have been chipping away at civil rights laws and regulations ever since. Because, over hundreds of years, the interruptions in Southern racial practice were relatively brief, racism has persisted in that region of the country to a relatively greater degree than in other areas.

,This pervasive and long-lasting culture was reflected in local and regional laws. Laws, in turn, are to be understood as educational tools that tell citizens what society deems to be right and wrong behavior. If laws are consistently enforced over a long period of time, most citizens will internalize these messages and they will become part of their moral code. Except for the 12 years of Reconstruction, the South had known nothing but legally sanctioned racist rules of behavior right up to the middle of the Twentieth Century. And so it was racist rules that were thoroughly internalized.

,What the Civil Rights laws of the1960s did was to suddenly, and partially, reverse the behavioral messages based on the older racist laws. They did so only partially because these new laws concentrated on making discrimination illegal within the public sphere. You could no longer segregate public schools, hotels, restaurants and the like, as well as government offices.

Today, African-Americans in the South check into a hotel, eat at a restaurant, shop where they want to without much trouble. However, if they do happen to have trouble, there is recourse under the law to deal with the problem. That has now been the case for 48 years. Yet this is not nearly enough time to have the message that racial discrimination is wrong penetrate deeply into the private sphere of a region where the opposite attitude has long been the default position.

My guess is that among some Southern citizens, the new egalitarian way of thinking is superficially there, and among others it is not there at all.

Communities with historically ingrained patterns of thinking and behaving may be bludgeoned, say, by violent revolution, into changing their ways. However, if you are to change them in a non-violent fashion you must bring to bear all of society’s traditional rule-making devices. These are primarily the law and the schools.

In the case of the United States, laws that enforce civil rights must be strengthened and steadily applied for multiple generations (at least four or five) until obeying these laws is habitual. That should permanently reform the public sphere.

Yet if Dylann Roof’s actions teach us anything, the rules regulating the private sphere must also be addressed. The teaching of the essential correctness of civil rights and the essential wrongness for racist attitudes must be put into the curriculum and taught in all the schools, public and private, from K to 12, and probably in undergraduate college as well. This too must be universal (whether parents like it or not), consistent and multigenerational.

None of this is really impossible. It can be done. We know enough about psychology to recognize that such an effort is not a waste of time. All it takes is the political and institutional will to do these things with patient persistence. Not until there are clear signs that racism has been erased from both the public and private spheres should anyone breathe a sigh of relief.

32 comments for “How to Eradicate Racism”