The evolution of thought on gay marriage shows how religions can adapt to humanistic trends of society, but religious fundamentalists refuse to budge from ancient prejudices, a challenge confronting not only Judaism and Christianity but Islam, as ex-CIA officer Graham E. Fuller describes.

Human sexuality has always been a deeply controversial social issue in all societies. So is religion. Put them together and you have a powerful emotional brew.

The U.S. Supreme Court ruling last week legalizing gay marriage poses a new challenge to Islamic communities in the U.S. The same goes for Christian and Jewish communities as well, at least to their most conservative elements. 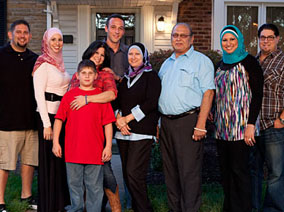 One of the families featured on TLC’s 2011 series, “All-American Muslim”

Religions throughout human history are the historical source of most morality and ethics, not easily overturned. Hostility to homosexuality, for example, is embedded in the Old Testament, was inherited into Christianity, and later into Islam by much the same process; all three essentially viewed it as an “abomination,” even though the practice is as old as mankind. In reality of course there is little that is “unnatural” in almost any aspect of human behavior, even when it is not mainstream.

With human evolution, however, humans have slowly come to perceive religion and the nature of the sacred in an evolving light; this is brilliantly discussed in Karen Armstrong’s study, A History of God , how thinking about the very nature of God has slowly changed.

And so religions over time have split on questions of the meaning of religion in society and the range of what should be prohibited. Such debates are still underway (even if often in secular guise) on issues of the degree of sanctity of marriage, divorce, abortion, minimal age of sexual permission, alcohol, drugs, incest and “out-of-wedlock” children. Every religion has both conservative and liberal wings interpreting these issues.

The public sphere and the private sphere can differ. Publicly, religion establishes norms (evolving later into more “secular” laws) that it imposes upon societies. Privately, there can be latitude for what one does behind closed doors. Homosexuality in private is thus usually ignored in reality, even when “illegal.”

Even a decade ago the U.S. military followed a “don’t ask, don’t tell” policy. But the issue could not be any further ignored when gay couples sought, justifiably in my view, the right to marry. Yet that call moved the issue of homosexuality out of the private and into the public and legal sphere. Not surprisingly this raised serious concerns in many conservative circles.

The evolution of public opinion in North America on gay marriage has moved rapidly over the past few decades. (Canada legalized it ten years ago, in 2005. So did Spain.) It would seem that such change in thinking came about not so much from theological and moral debate, but much more from a human source: people’s growing exposure to gay people, as friends, co-workers, and indeed, their own children. Acknowledgment of the existence of homosexuality is, of course, one thing an element of human sexuality since time immemorial; but acceptance of gay marriage a legal step is another.

But what brings about a shift on the theological level, where many religious communities have come to concur? A shift towards more liberal theological interpretations of homosexuality within Christian or Jewish communities over the past few decades has usually emerged from some kind of process of prioritizing “higher values” within the faith that transcend earlier prohibitions, often perceived as historically based.

In simplest form, in open multicultural societies liberal religious thinkers have come to lay greater emphasis on tolerance within society, the need to love, honor, respect and embrace all members of society rather than to seek out, condemn, reject or even punish minoritarian beliefs and practices.

The ultimate moment of truth comes of course when one’s own children declare themselves gay. (Note even arch-conservative Dick Cheney’s change when his daughter declared herself lesbian.) It is extremely difficult for most of us to accept our children in any way as “evil” (although there are many heartbreaking tales of some parents actually making that call.)

And so we come to perceive sexual orientation as the product of biological and psychological forces, not willful moral choices of non-standard behavior. Society then begins to realize that the gay portion of the human sexual spectrum is broader than it had earlier believed and must be addressed. And it becomes ever harder to judge the private behavior of consenting adults around us if it does no harm to others.

Nor does homophobia derive strictly from religious grounds. There are many quite unreligious homophobes who, in their social and psychological insecurity, fear, condemn and harass all differences in color, race and life-style while aggressively asserting their own macho “values.”

Hollywood too, of course, has played a significant role in bringing awareness of gay life into the mainstream, hastening public acceptance of the phenomenon. The passage of time is also a factor in this evolution. Thus the Supreme Court decision this week might not have been thinkable in the U.S. ten years ago (although it obviously was in Canada.)

What about Muslims in the West? As in other areas of life, Muslims may find it a slower process in squaring acceptance of gay-life style and, even more, same-sex marriage with their own religious tradition. The situation is not dissimilar for Orthodox Jews, for whom the Torah explicitly condemns homosexuality (and Jewish law technically requires the death penalty for its practice.) Nonetheless, liberal Judaism has risen above these theological strictures and reinterpreted them in new contexts of higher human values.

Western Jews have immensely influenced that evolution of thinking in Judaism overall. I suspect this will be the case with western Muslims as well. But Muslims have a vastly shorter history of life in the West where they struggle for acceptance on many levels. As in the history of most minorities experiencing some discrimination in the West, it’s not just about religion: Muslims naturally strive to preserve some socio-cultural solidarity to preserve and protect the community.

Islam is not just a religion, but an identity. Starting to think critically about their own religion, a controversial act in any religion, is not an easy task for Muslims under these circumstances; critical questioning impacts on that solidarity.

But Muslims living and socialized in the West are inevitably pushed to accept the reality of gay life around them, among their co-workers, communities, and even where their children may eventually come out. Predictably most of their religious leaders, however, will largely uphold traditional Islamic theology on these issues, at least for a time, until the socialization process catches up, and we see more native-born American imams.

So just as the liberalization process has worked its way through liberal elements of both Christian and Jewish religious communities with time, so that moment will come among western Muslims as well.

As in many other ways as well, western Muslims are at the forefront of social, intellectual and even moral thinking within the Muslim world. This is the product of relative freedom of thought and life in the West. It is also the product of life in stable societies, not possible today in war-torn chaotic Middle Eastern countries clashing over questions of identity and authenticity.

Graham E. Fuller is a former senior CIA official, author of numerous books on the Muslim World; his latest book is Breaking Faith: A novel of espionage and an American’s crisis of conscience in Pakistan. (Amazon, Kindle). [This article originally appeared at grahamefuller.com]