U.S. expansion of NATO up to Russia’s borders and last year’s U.S.-backed coup in Ukraine have drawn reactions from Moscow and now counter-reactions from Washington, including a plan to preposition U.S. military hardware in the Baltic States. But is that the best option, asks ex-CIA analyst Paul R. Pillar.

The U.S. Department of Defense reportedly has plans to place tanks, infantry fighting vehicles, and other heavy weapons in the Baltic countries and elsewhere in Eastern Europe. It is easy to see what this is about. It is an attempt to send a signal, a warning, of sorts, to Russia amid the continued tensions that events in Ukraine have heightened.

The type of signal was chosen to be strong enough to be reassuring to East Europeans who are looking for reassurance and to meet domestic demands to be seen standing up to Vladimir Putin, while being restrained enough not to prod the Russians into making some destructive response. 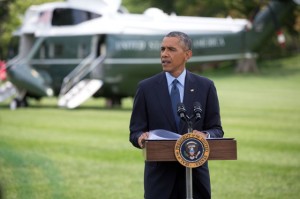 President Barack Obama delivers a statement on the situation in Ukraine, on the South Lawn of the White House, July 29, 2014. (Official White House Photo by Lawrence Jackson)

If this positioning of military equipment was the middle option on an options paper, the alternatives bracketing it were the weaker option of limiting policy toward Russia to non-military measures, or the more provocative one of stationing U.S. troops and not just equipment in those Eastern European locations. In other words, a half measure, similar to how economic sanctions are often seen as a compromise between doing nothing beyond a diplomatic demarche or sending in the Marines.

Military moves as signals have long been a part of international relations and of deterrence, but we still ought to ask about the strategic wisdom and rationale of the proposed equipment deployment. Even a mere signal loses its meaning and effectiveness if it is disconnected from material implications and consequences.

The positioning of materiel sounds like some familiar U.S. moves in Cold War-era Europe, but it actually is different. U.S. troops in Europe became the prototypical “trip-wire” of the Cold War, with an attack against them being widely assumed to bring full U.S. engagement in any war in Europe. An attack against stored U.S. munitions, however, is not the same in that regard as an attack that kills U.S. soldiers.

Prepositioning of equipment in Germany was another staple of Cold War logisticians, but that was part of a serious effort to facilitate U.S.-led resistance to any attempt by the Red Army to overrun Western Europe. The total stocks being considered for positioning in Eastern Europe would be about enough for a single brigade.

Each of the three Baltic republics would be the location for equipment that would outfit a company of about 150 soldiers. It is hard to think of that in the same terms as the Cold War prepositioning. Probably one of the first things that would happen if Russia got aggressive against the Baltic states would be Russian capture of the prepositioned supplies.

Russia has issued its own warnings in response to the reported U.S. plans. That is to be expected, but it may be only the first step toward a local arms race. Do not be surprised by Russian deployments along border areas that would make quick capture of prepositioned U.S. supplies all the more feasible if Russian troops were to cross more borders. A Russian general already has said as much.

A fundamental and longstanding question underlying all of this is exactly what the United States would be willing as well as able to defend in response to any Russian aggression, or to serious military moves dressed up as something other than aggression.

Questions were asked during the Cold War about whether Americans would be willing to risk New York or Washington to save Bonn or Paris. Such questions become all the more difficult to answer reassuringly when the subject is Riga and Tallinn rather than Bonn and Paris. The Article Five commitment in the North Atlantic Treaty still exists, but the imagined circumstances in which it could apply today, which might begin with little green men sneaking across a border, are far different from an imagined pouring of Red Army hordes through the Fulda Gap.

Closely related to all this is how attitudes toward NATO obligations have evolved within member countries. In a new Pew poll, when asked “If Russia got into a serious military conflict with one of its neighboring countries that is our NATO ally, do you think our country should or should not use military force to defend that country?” majorities in three of the most important European allies, Germany, France, and Italy, responded “should not.”

This amounts to a repudiation of the Article Five obligation to consider an armed attack against any one member state as an attack against all. In the poll, Americans expressed the most intent to live up to that obligation, with 56 percent saying “should.” But 37 percent of American respondents said “should not.” In light of such alliance-wide attitudes, it is fair to ask what NATO stands for today.

That question, and the prospect of possible new arms races along the Russian borderlands, are embedded in the story of how one of the Cold War alliances did not end when the Cold War did. It is impossible to prove what European affairs would look like today under an alternate history in which NATO was not retained and enlarged eastward as a kind of unending victory lap for winning the Cold War.

It is reasonable to conjecture, however, that under such an alternate history, in which the Russian nation was embraced as a co-victor for throwing off the Soviet yoke, we would not only not have so much discomfort about treaty obligations but also less need to think about the Russian-Western relationship going in directions in which those obligations might be invoked.

But that was a road not taken, and it should not be surprising that sustaining and expanding a Cold War alliance has helped lead to circumstances in which we talk about a new Cold War, even without all of the ideological trappings of the old one.

← Explaining Myself
Fiddling While the World Burns →

9 comments for “Stumbling into a New Cold War”