Some civil liberties groups praised the USA Freedom Act for its modest nips at the Surveillance State, but whistleblowers from inside the U.S. government were more skeptical about the law’s very slight accomplishments, writes Norman Solomon.

The morning after final passage of the USA Freedom Act, while some foes of mass surveillance were celebrating, Thomas Drake sounded decidedly glum. The new law, he told me, is “a new spy program.” It restarts some of the worst aspects of the Patriot Act and further codifies systematic violations of Fourth Amendment rights.

Later on Wednesday, here in Oslo as part of a “Stand Up For Truth” tour, Drake warned at a public forum that “national security” has become “the new state religion.” Meanwhile, his Twitter messages were calling the USA Freedom Act an “itty-bitty step”, and a “stop/restart kabuki shell game” that “starts w/ restarting bulk collection of phone records.” 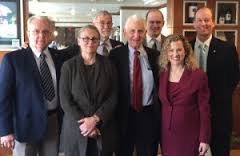 That downbeat appraisal of the USA Freedom Act should give pause to its celebrants. Drake is a former senior executive of the National Security Agency, and a whistleblower who endured prosecution and faced decades in prison for daring to speak truthfully about NSA activities. He ran afoul of vindictive authorities because he refused to go along with the NSA’s massive surveillance program after 9/11.

Drake understands how the NSA operates from the highest strategic levels. He notes a telling fact that has gone virtually unacknowledged by anti-surveillance boosters of the USA Freedom Act: “NSA approved.” So, of course, did the top purveyor of mendacious claims about the U.S. government’s surveillance programs, President Barack Obama, who eagerly signed the “USA Freedom” bill into law just hours after the Senate passed it.

A comparable guardian of our rights, House Speaker John Boehner, crowed: “This legislation is critical to keeping Americans safe from terrorism and protecting their civil liberties.”

While some organizations with civil-liberties credentials have responded to the USA Freedom Act by popping open champagne bottles at various decibels, more sober assessments have also been heard. Just after senators approved the bill and sent it to the president, Demand Progress issued a statement pointing out: “The Senate just voted to reinstitute certain lapsed surveillance authorities, and that means that USA Freedom actually made Americans less free.”

Another astute assessment came from CREDO, saying that Congress had just created “sweeping new authorities for the government to conduct unconstitutional mass surveillance of Americans.”

As it happened, the President signed the USA Freedom Act into law while four U.S. “national security” whistleblowers, Drake as well as Coleen Rowley (FBI), Jesselyn Radack (Justice Department) and Daniel Ellsberg (Pentagon Papers), were partway through a “Stand Up For Truth” speaking tour from London to Oslo toStockholm to Berlin. Traveling as part of the tour, I’ve been struck by the intensity of interest from audiences in the countries we’ve already visited, Great Britain and Norway, where governments have moved to worsen repressive policies for mass surveillance.

Right now, many people in Europe and elsewhere who care about civil liberties and want true press freedom are looking at the United States: to understand what an aroused citizenry might be able to accomplish, seeking to roll back a dangerous accumulation of power by an ostensibly democratic government. Let’s not unwittingly deceive them, or ourselves, about how much ground the U.S. surveillance state has lost so far.

Norman Solomon’s books include War Made Easy: How Presidents and Pundits Keep Spinning Us to Death. He is executive director of the Institute for Public Accuracy and coordinates its ExposeFacts project. Solomon is a co-founder of RootsAction.org.