The Framers of the U.S. Constitution envisioned an activist federal government that would help build the new country, including transportation infrastructure, but that history has been lost amid Tea Party revisionism that treats all constructive government actions as bad, a dilemma addressed by ex-CIA analyst Paul R. Pillar.

The fatal crash of an Amtrak train in Philadelphia obviously is disturbing to those of us who often use the same service; it also is a symptom of a pattern, involving politics, economics and morality, that is disturbing in a much larger sense.

The chief investigator for the National Transportation Safety Board assesses that had a federally mandated automated system for restricting the speed of trains been in operation on the section of track involved, the crash would not have occurred. 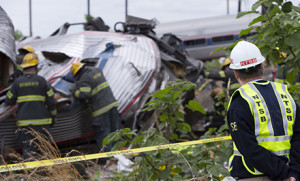 National Transportation Safety Board officials examine site of Amtrak derailment, which occurred on May 12, 2015, in Philadelphia, Pennsylvania. (NTSB photo)

Amtrak has been ahead of the rest of the railroad industry in installing the system, but as is often the case, resources are the major factor in more rapid progress in installation not having been made. The day after the crash, and despite that fatal incident, a committee of the House of Representatives rejected a proposal for increased funding of Amtrak.

This posture is indicative of a broader neglectful attitude toward America’s notoriously deteriorating infrastructure. The anomaly of this situation prevailing within the world’s superpower is apparent to any traveler who has enjoyed the use of more modern public services in any of several European countries, with rail transportation providing one of the most glaring contrasts.

At play here are some fundamental issues regarding attitudes toward, and management of, the commons, those assets and resources that are of use and importance to an entire community. The original formulation of the tragedy of the commons, which Garrett Hardin put in classic form nearly 50 years ago, involved how the marginal benefits and costs of any one individual’s exploitation of a collective resource leads to excessive exploitation and deterioration of the resource.

Each individual owner of livestock gets a net benefit from having his animals graze on a common pasture, but multiple owners following the same logic results in overgrazing and eventual ruin of the pasture. This kind of destructive dynamic is still very much in evidence with some important resources, most notably at the global level with how the marginal benefit exceeds the marginal cost for individual emitters of carbon into the atmosphere, with an eventual collective result threatening to be ruinous for all.

But at the national and sub-national levels, there also is another destructive dynamic that leads to deterioration of the commons, especially parts of the commons that are man-made. Some such parts can be ruined not only by too much exploitation but also by not enough attention and upkeep.

The deterioration of roads and railways comes partly from use, but also from time, weather, ice and rust. Left alone and given enough time, nature can restore a pasture to life, but nature cannot repair a bridge. The need for positive attention and upkeep is all the more apparent with common resources, such as public education, that are less a matter of physical structures than are roads and bridges.

The destructive logic of the new tragedy of the commons consists of those with the wherewithal to do so ending their own reliance on the commons and relying on privately owned assets instead. This results in less of a base of support for keeping the commons in good shape. It especially means less support from those whose support is especially important because of the wealth involved.

President Barack Obama, at a recent event at Georgetown University, remarked about this kind of withdrawal from the commons and how apparent it has become in recent years in the United States; he made particular reference to wealthy parents keeping their children out of public schools and instead using private institutions for education and extracurricular activities.

Also at the event and concurring in the President’s observation was Robert Putnam, whose study Bowling Alone documented the withdrawal of Americans during recent decades from many forms of community commitment and involvement. It’s not just a matter of schools, tennis clubs or bowling leagues. One’s interest in maintaining mass transportation, for example, declines or disappears if one uses a private jet instead.

In the United States these trends are exacerbated by two other factors. One is growing economic inequality, with an expanding divide between the large numbers who must rely on the commons, including public schools and mass transportation, and a smaller number who have other options.

The increased concentration of wealth at the very top makes the private jet option a reality and not just a theoretical discussion point. And in a post-Citizens United world, the opportunities for the very wealthy to manipulate political perceptions in a way that blurs the meaning of the divide is greater than ever.

The other exacerbating factor is the prevalence in the United States of the ideologically driven belief that anything government does is ipso facto bad and that what the private sector does is by contrast good. This attitude ignores how, although markets do many things very well, there are many other important things that by their very nature markets cannot do well.

It also ignores the fact that the private sector does not equate with free markets and that sometimes more, not less, governmental involvement is necessary to have a truly competitive free market (antitrust enforcement being an obvious but by no means the only example).

Some of the worst consequences come when treating something that actually is part of the commons as if it were instead just another commodity to be traded in the market. Thus we increasingly have chaos and predation in the assignment of web addresses on the Internet.

Some similar things have happened with another part of the commons: the part of the electromagnetic spectrum used for communication through the airwaves. Problems here were even a factor in the train wreck in Philadelphia. Delays in installing the automated train control system have been due not only to limited financial resources but also to the need for Amtrak to negotiate with private companies that have acquired ownership of portions of the spectrum that the system needs to operate. That negotiation process has taken years, even though government regulators at the Federal Communications Commission accomplished their part of the approval process in a matter of days.

To get a sense of the direction the withdrawal from the commons can be headed, look at any of many less developed countries in which a wealthy elite lives in effect in a separate world from the masses that surround them. The elite can, and do, rely on private resources for everything from transportation to clean water to power generation. They not only do not depend on the commons; they are barely even aware of the commons.

An extreme example of this is the 34-story residence that an Indian tycoon built in South Mumbai and contains just about anything the owner might want. And if it isn’t there, he can fly off his helipad to wherever he wants to go without even setting eyes on the streets below.

In those less developed countries, even security has become in large part privatized, with privately employed guards rather than police forces providing most of the security that matters for the residences and businesses of the elite. In the United States we still have a bit more of the sovereign concept of government having a monopoly on the legitimate use of force, but even that sense has weakened as the country has moved away from the idea that force in the form of firearms should be a matter of, in the words of the U.S. Constitution, well-regulated militias.

It is no accident that repeated controversial high-profile incidents in recent years entailing the use of firepower on U.S. streets have involved either public police forces that are undermanned, insufficiently trained, and little respected, or private security elements such as armed neighborhood watch patrols.

For those concerned with the exercise of national power globally, a final observation about differing attitudes toward the commons is that the bifurcated elite/mass arrangements in less developed countries do not constitute a prescription for national power. Such a system may satisfy the immediate needs of the elite, but they are a poor way to mobilize the physical and especially the human resources of the country. That is not the direction that we ought to go.

The domestic strength on which power and respect abroad are built must include strength of the commons. Being powerful requires being more like the countries that nurture and respect their own commons, and where trains run not only on time but safely.

2 comments for “The Value of Effective Government”