Exclusive: Many Americans think secret U.S. documents become public after, say, 30 years, but many are hidden indefinitely to conceal inconvenient truths that could enlighten public debate, as Robert Parry discovered in getting a redacted version of a “top secret” paper from 1981 that he had already found in unredacted form.

By recently releasing a redacted version of top secret “talking points” that Secretary of State Alexander Haig used to brief President Ronald Reagan about Mideast developments in spring 1981, the U.S. government has inadvertently revealed what it still wants to hide from the public some 34 years later because I found the full version in congressional files in late 1994 and first wrote about it in early 1996.

The key points that the U.S. government still doesn’t want you to know include that in early 1981 Israel already was supplying U.S. military equipment to Iran for its war with Iraq; that the Saudis had conveyed a “green light” supposedly from President Jimmy Carter to Saddam Hussein to invade Iran in 1980; and that the Saudis agreed to finance arms sales to Pakistan and other states in the region. 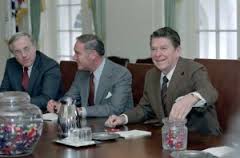 President Ronald Reagan with Secretary of State Alexander Haig and National Security Advisor Richard Allen during a meeting with Interagency Working Committee on Terrorism in the Cabinet Room on Jan. 26, 1981. (Photo from Reagan Library archives)

All three points have relevance today because they reveal the early seeds of policies that have grown over the past three decades into the twisted vines of today’s bloody conflicts. The still-hidden sections of Haig’s “talking points” also could cause some embarrassment to the nations mentioned.

For instance, the Israelis like to present their current hostility toward Iran as derived from a principled opposition to the supposed extremism of the Islamic state, so the revelation that they were supplying U.S. military hardware to Ayatollah Ruhollah Khomeini’s government, which had held 52 American diplomats hostage for 444 days, suggests that less noble motivations were driving Israel’s decisions.

Though ex-President Carter has denied encouraging Iraq to invade Iran in September 1980 at the height of the hostage crisis which was destroying his reelection bid the Saudis’ “green light” assertion at least indicates that they led Iraq’s Saddam Hussein to believe that his invasion had U.S. backing.

Whether the Saudis deceived Hussein about the “green light” or not, their instigation of the war exposes the origins of the modern Sunni-Shiite conflict, though now the Saudis are accusing the Iranians of regional aggression. The Haig “talking points” reveal that the first blow in the revival of this ancient fight was thrown not by the Shiites of Iran but by the Sunnis of Saddam Hussein’s Iraqi regime with Saudi backing and encouragement.

The Saudi agreement to pay for arms purchases by Pakistan and other regional government sheds light on another aspect of today’s Mideast crisis. Saudi financial help to Pakistan in the 1980s became a key element in the expansion of a radical Sunni jihadist movement that coalesced along the Pakistan-Afghanistan border to carry on the CIA-backed war against the Soviet army and secular Afghan forces.

That war with the United States and Saudi Arabia each eventually pouring in $500 million a year led to the withdrawal of Soviet troops and the collapse of the modernist, leftist regime in Kabul to be replaced by the ultra-fundamentalist Taliban which, in turn, gave sanctuary to Al-Qaeda led by a wealthy Saudi, Osama bin Laden.

Thus, the outlines of today’s violent chaos across the Middle East were sketched in those years, albeit with many subsequent twists and turns.

After the Iran-Iraq War ended in 1988 with both countries financially drained Saddam Hussein turned on his suddenly stingy Sunni benefactors who began refusing further credit and demanding repayment of wartime loans. In reaction, Hussein after consulting with U.S. Ambassador April Glaspie and thinking he had another “green light” invaded Kuwait. That, in turn, prompted a U.S.-led deployment to both defend Saudi Arabia and drive Iraqi forces out of Kuwait.

Although Hussein soon signaled a readiness to withdraw his troops, President George H.W. Bush rebuffed those overtures and insisted on a bloody ground war both to demonstrate the qualitative superiority of the modern U.S. military and to excite the American people about a military victory and thus to “kick the Vietnam Syndrome.” [See Robert Parry’s Secrecy & Privilege.]

Bush’s military offensive succeeded in those goals but also provoked bin Laden’s outrage over the placement of U.S. troops near Islamic holy sites. The United States became the new target of Al-Qaeda’s terrorist revenge. And, for Official Washington’s emerging neoconservatives, the need to finally and completely destroy Saddam Hussein then Israel’s bête noire became an article of faith.

The Persian Gulf War’s demonstration of U.S. military prowess combined with the collapse of the Soviet Union in 1991 also encouraged the neocons to envision a strategy of “regime changes” for any government that showed hostility toward Israel. Iraq was listed as target number one, but Syria also was high on the hit list.

By the early 1990s, Israel had grown alienated from cash-strapped Iran, which had withdrawn from the lucrative arms bazaar that Israel had been running for that Shiite government through the 1980s. Gradually, Israel began to realign itself with the Sunnis bankrolled by Saudi Arabia.

The 9/11 attacks in 2001 were an expression of the anti-U.S. outrage among Sunni fundamentalists, who were funded by the Saudis and other Persian Gulf oil states, but the intricate realities of the Middle East were then little known to the American people who didn’t much know the difference between Sunni and Shiite and who lacked knowledge about the hostilities between secularists like Hussein and fundamentalists like bin Laden.

President George W. Bush and his administration exploited that ignorance to rally the public behind an invasion of Iraq in 2003 out of unrealistic fears that Saddam Hussein would share weapons of mass destruction with Osama bin Laden. Beyond the false claims about Iraq having WMDs and about a connection between Hussein and bin Laden, there was little appreciation even within the higher levels of the Bush administration about how the ouster and killing of Hussein would shatter the fragile equilibrium between Sunnis and Shiites.

With Hussein removed, the Shiite majority gained control of Iraq, distressing the Saudis who had, in many ways, launched the modern Sunni-Shiite war by pushing Iraq’s invasion of Iran in 1980 but who now saw Iran’s allies gaining control of Iraq. The Saudis and other Gulf sheiks began financing Sunni extremists who flooded into Iraq to fight the Shiites and their enablers, the U.S. military.

The Saudis also built a behind-the-scenes alliance with Israel, which saw its financial and geopolitical interests advanced by this secret collaboration. Soon, the Israelis were identifying their old arms-trading partners, the Iranians, as an “existential threat” to Israel and pushing the United States into a more direct confrontation with Iran. [See Consortiumnews.com’s “Did Money Seal Israel-Saudi Alliance?”]

The battlefront in the Sunni-Shiite conflict moved to Syria, where Israel, Saudi Arabia, Turkey and other Sunni states joined in supporting a rebellion to oust the government of President Bashar al-Assad, an Alawite, an offshoot of Shiite Islam. As that conflict grew bloodier and bloodier, Assad’s relatively secular regime became the protector of Christians, Shiites, Alawites and other minorities against the Sunni forces led by al-Qaeda’s Nusra Front and the hyper-brutal Islamic State.

In 2014, pressed by President Barack Obama, the Saudis joined an alliance against the Islamic State, although Saudi participation was tepid at best. Saudi Arabia’s true enthusiasm was to push a series of regional proxy wars against Iran and any Shiite-related movements, such as the Houthis in Yemen and the Alawites in Syria. If that helped Al-Qaeda and the Islamic State, so be it, was the Saudi view.

Though the two redacted paragraphs from Haig’s “talking points” from 34 years ago might seem to be ancient history no longer worthy of the secrecy stamp, the U.S. government still insists on shielding that information from the American people, not letting them know too much about how these entangling alliances took shape and who was responsible for them.

The primary sources for Haig were Egyptian President Anwar Sadat and Saudi Prince Fahd (later King Fahd), both of whom are dead, as are several other principals in these events, including Reagan, Hussein and Haig. The two redacted paragraphs that Haig used in his presentation to Reagan read as follows, with underlined sections in the original “talking points”:

”Fahd was also very enthusiastic toward your policies. As a measure of his good faith, he intends to insist on a common oil policy at a forthcoming meeting of his Arab colleagues which will include a single price and a commitment to no drop in production. Also of importance was Fahd’s agreement in principle to fund arms sales to the Pakistanis and other states in the area.

“Both Sadat and Fahd provided other bits of useful intelligence (e.g. Iran is receiving military spares for U.S. equipment from Israel). It was also interesting to confirm that President Carter gave the Iraqis a green light to launch the war against Iran through Fahd.”

The redacted version with those two paragraphs blacked out was released by the George H.W. Bush presidential library after the “talking points” went through a declassification process. The release was in response to a Freedom of Information Act request that I had filed in connection with the so-called October Surprise affair, in which the Reagan-Bush campaign in 1980 was alleged to have conspired with Iranian officials and Israeli intelligence officers to delay the release of the 52 American hostages held in Iran to ensure President Carter’s reelection defeat.

In 1991, Congress began an investigation into the 1980 issue, suspecting that it may have been a prequel to the Iran-Contra scandal which had involved Reagan’s secret arms-for-hostage deals with Iran in 1985-86 (also with Israeli help). The George H.W. Bush administration collected documents possibly related to the 1980 events and shared some with the congressional investigation, including the Haig “talking points.”

But Bush’s operatives trying to protect his reelection chances in 1991-92 engaged in delays and obstructions of the congressional inquiry, which finally agreed after Bush’s defeat by Bill Clinton in November 1992 to say that it could find “no credible evidence” that Reagan and Bush had orchestrated a delay in Iran’s release of the hostages. The hostages were finally freed on Jan. 20, 1981, immediately after Reagan was sworn in as president.

Subsequent disclosures of evidence, however, buttressed the long-held suspicions of a Republican-Iranian deal, including documents that the Bush-41 White House had withheld from Congress as well as other documents that the congressional investigation possessed but ignored. [See Consortiumnews.com’s “Second Thoughts on October Surprise” or, for more details, Robert Parry’s America’s Stolen Narrative.]