Ancient religions used myths to explain the mysteries of the universe to primitive people, making up stories that modern humans know to be imaginative but false. The problem, however, is that many people still anchor their world views in these old fables, as Rev. Howard Bess describes.

The writers of the Bible material had a very primitive understanding of the world and the universe. They did not grasp that the world circled the sun and was spinning constantly. They had no understanding of a universe that was a part of a much larger galaxy that was only one of millions of galaxies.

Writers of Bible material observed the earth and the heavens and were understandably in awe. However, we now know that what they saw was completely beyond their understanding. These special writers had no idea at what they were looking. They came to conclusions about the God of all things based on primitive and incorrect understandings of nature. 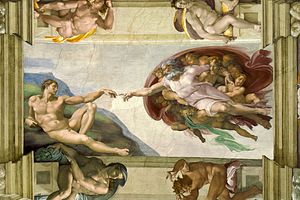 Scientific research has pushed far ahead of ancient misunderstandings. Our present scientific knowledge of the expanses of space has left the earth a tiny dot that hosts humbled human beings, who at one time thought the “heavens and the earth” were a commentary about the God who created all things and who continues to have significant control over all things.

This “natural” theology took its place alongside “special” revelations that came through great prophets such as Moses, Abraham, Isaiah and finally Jesus, the common man’s rabbi from Nazareth. Science has brought us new understandings and conclusions about this planet on which we live and the universe that hosts our world.

Unfortunately, many Christians refuse to acknowledge this radical new kid in our intellectual neighborhood.

Scientists have reached two tentative conclusions that impact our conversation. The first is that “nothing is fixed.” All things are in motion; all things are evolving, including human beings. Human beings are not the product of a single creative act by an all-powerful God, rather human beings are always becoming, always arriving. What human beings have become is the result of a long process, which is continuing.

The work of Charles Darwin on biological evolution forced a discussion in Christian theology that will not go away. Alfred North Whitehead took evolution into the world of philosophy. Charles Hartshorne moved the discussion to theology, writing: “Everything, including God, is ceaselessly changing in a dynamic process of creative advance that will never end.”

John Cobb Jr. took up the mantel of Hartshorne and taught for many years at the Claremont School of Theology, which has embraced the exploration of “process” theology more than any other Christian seminary. He forced the subject of process into the curriculum of almost every U.S. seminary. Christianity in an educated world cannot long avoid the scientific adventure with process.

Scientists are now describing the outer limits of space in terms of millions of light years and still expanding at accelerating speeds. Thus, beginnings and endings are no longer relevant concepts. Yet, the Bible writings have a lot of materials about beginnings and endings, and Christian theology offers a widely accepted framework in linear time that has a beginning and an end.

Beyond God creating the heavens and earth in seven days, some Christian churches are filled with “end times” theology. This kind of thinking is terribly outdated and irrelevant in the light of modern science.

What kind of theology can relate to science that embraces life that is never static and always in process? How does theology relate to life that has no beginning and no ending? Science continues to have a great void that scientists can never fill.

When Jesus was asked about the greatest commandment he responded with two laws that are begging for embrace. Love God and love neighbor. I find no conflict with our faith’s fundamentals and our search for understanding our living context. I suspect that science is in its infancy. Theology and faith need to be seen as an ongoing, every day joyful experience.

Life is fun and rich when we get religious people and scientists on the same dance floor.