American government increasingly bent to the whims and desires of the wealthy is emerging as a populist issue among pro-democracy citizens who favor the old idea of government for the people, as Michael Winship describes.

To the blare of sounding brass and booming drums, some 800 activists and community organizers from around the country recently converged on Washington, DC. We are living, breathing proof, they announced, that if we can’t get change from our representatives in the capital, we’ll bring it to them, and work to make them hear what must be done.

It was the Populism2015 conference, organized by National People’s Action (NPA), Campaign for America’s Future, Alliance for a Just Society and USAction although as populist commentator Jim Hightower noted at the opening session, “This not so much a conference but a construction crew for nothing less than democracy.” 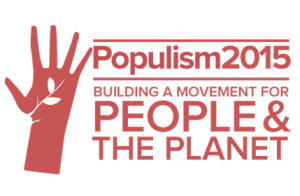 For anyone dispirited by the malaise of powerlessness or disgusted by the dysfunction of mainstream politics, the gathering was a hopeful sign that in every part of the United States, people are taking matters into their own hands and demanding attention and respect.

As the organizers wrote in their welcome to the attendees, “A new populist movement is rising in our country. Growing inequality, a sinking middle class and the increasing burdens on low-income people have been building for a long time. The difference now is that everyday people understand that this isn’t an accident or an act of nature. It is the result of rules that have been rigged to benefit the few and we’re not willing to take it anymore.”

Pointing to Occupy Wall Street, the fight for a $15 minimum wage, #BlackLivesMatter, the campaign to stop global warming, and the elections of Sen. Elizabeth Warren and New York Mayor Bill de Blasio as positive signs of change, they continued, “Populism2015 will draw upon those movements and incorporate their spirit, power and energy. We will elevate, strengthen and amplify the leadership of our national progressive champions.”

Pouring into the ballroom and meeting spaces of DC’s Shoreham Hotel, such groups as Main Street Alliance, Take Action Minnesota, Keystone Project, Illinois Indiana Regional Organizing Network (IIRON), Montana Organizing Project and many others gathered for practical workshops and a flurry of speeches intended to energize and motivate, all of them dedicated to the idea of a national movement to take the country back. The theme: “Building a Movement for People and the Planet.”

Along the way, “expose the big lie that corporate greed is good for everyone,” and encourage the ideal that the economy “should work for all of us.”

And so, Janice “Jay” Johnson, treasurer of Virginia Organizing/Alliance for a Just Society, described their fight against predatory payday lending. Jean Ross, co-president of National Nurses United, spoke of the perils of austerity “Come into any emergency room; these policies kill people”, and called for passage of HR 1464, the Inclusive Prosperity Act. That’s the Robin Hood Tax that would collect 50 cents on every hundred dollars of stock trades. “Take that money back from the banksters,” she declared.

Vien Truong of California’s Greenlighting Institute told the story of their involvement in the successful effort to get $832 million in cap-and-trade agreements from polluters, money the state will spend on such programs as free bus passes for seniors and students, electric trucks and buses and affordable green housing.

Eric Kennedy of the Washington Community Action Network outlined the campaign for a living wage in the Pacific Northwest and Bob Cook of PUSH Buffalo talked about their work for a green economy and the group’s involvement in the successful New York State ban on fracking.

George Goehl, executive director of National People’s Action, said, “America’s beauty has always come from how we react to injustice,” and stressed the need to rebalance the relationship between everyday people and corporate America, as well as the importance of seeking candidates with ideas and plans to address structural racism in America. He introduced Congressman Keith Ellison of Minnesota, co-chair of the Congressional Progressive Caucus.

Rep. Ellison talked about those “systematically trying to exclude people from the vote,” but also detected “a renaissance of democracy and civic engagement,” and urged the crowd not to give up on Capitol Hill: “Not everyone in Congress has sold out,” he said. “Eighty people in Congress are down with you”, presumably, the members of the progressive caucus plus a few friends. “Thirty-five are down with you on each and every issue.” It’s a start.

Introduced were three activists who have themselves sought public office: Gina Melaragno of Maine People’s Alliance became a state representative when she grew fed up with the incumbent’s indifference to the needs of his constituents; Carlos Ramirez-Rosa is a gay Latino just elected as an alderman in Chicago’s 35th Ward, part of the progressive coalition that sought to unseat Mayor Rahm Emanuel and forced him into a runoff with Jesus “Chuy” Garcia; and Jim Keady of the New Jersey Organizing Project is running for the state assembly. He’s the guy Gov. Chris Christie told to “sit down and shut up” last fall when Keady had the temerity to challenge Christie’s mishandling of aid to the victims of Hurricane Sandy.

As Congressman Ellison pointed out, “Politicians see the light when they start to feel the heat.” He was talking about public pressure to prevent passage of fast track legislation to grease the way for approval of the Trans-Pacific Partnership (TPP) trade agreement. And in fact, the Populism2015 conference ended with a protest rally and march against TPP led by Sen. Bernie Sanders from the Washington headquarters of the AFL-CIO to the offices of the Chamber of Commerce and the U.S. Trade representative.

But not before the conference crowd unanimously approved a 12-point platform for the next four decades: “A national strategic vision,” is how Campaign for America’s Future’s Robert Borosage described it, “backed by thousands of organizers on the ground. It is the standard by which every candidate, Democrat and Republican, can be measured.”

The entire platform is online. Among its headlines: Rebuild America for the 21st Century and Create Jobs for All, Guarantee Women’s Economic Equality, Provide a High-Quality Education to Every Child, and Change Priorities to Address Real Security Needs.

But all twelve can be boiled down to one simple, bumper sticker notion that tells our elected officials to stop kowtowing to the plutocrats, to stop making decisions that affect our lives without listening and acting upon our behalf instead of the one percent’s. It’s a slogan that’s been popular in the disabled rights movement yet applies to everyone struggling to be heard. You could hear it all around the Populism2015 conference:

“Nothing about us without us.”

Michael Winship is the Emmy Award-winning senior writer of Moyers & Company and BillMoyers.com, and a senior writing fellow at the policy and advocacy group Demos. [This story originally appeared at billmoyers.com.]