American politicians and pundits genuflect to the theory of exceptionalism, which holds that the U.S. can do pretty much whatever it wants, but this lawlessness best exemplified by drones raining down death on “terrorists” and civilians alike makes more enemies than it kills, writes Marjorie Cohn.

President Barack Obama stood behind the podium and apologized for inadvertently killing two Western hostages – including one American – during a drone strike in Pakistan. Obama said, “one of the things that sets America apart from many other nations, one of the things that makes us exceptional, is our willingness to confront squarely our imperfections and to learn from our mistakes.”

In his 2015 State of the Union address, Obama described America as “exceptional.” When he spoke to the United Nations General Assembly in 2013, he said, “Some may disagree, but I believe that America is exceptional.” 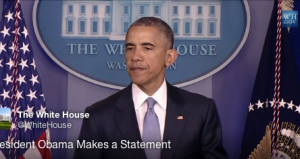 President Barack Obama speaks in the White House press room on April 23, 2015, regarding a counterterrorism strike that accidentally killed an American and an Italian hostage. (Screen shot from WhiteHouse.gov)

American exceptionalism reflects the belief that Americans are somehow better than everyone else. This view reared its head after the 2013 leak of a Justice Department white paper that describes circumstances under which the President can order the targeted killing of U.S. citizens. There had been little public concern in this country about drone strikes that killed people in other countries. But when it was revealed that U.S. citizens could be targeted, Americans were outraged. This motivated Sen. Rand Paul, R-Kentucky, to launch his 13-hour filibuster of John Brennan’s nomination for CIA director.

It is this double standard that moved Nobel Peace Prize winner Archbishop Desmond Tutu to write a letter to the editor of the New York Times, in which he asked, “Do the United States and its people really want to tell those of us who live in the rest of the world that our lives are not of the same value as yours?” (When I saw that letter, I immediately invited Archbishop Tutu to write the foreword to my book, Drones and Targeted Killing: Legal, Moral, and Geopolitical Issues. He graciously agreed and he elaborates on that sentiment in the foreword.)

Obama insists that the CIA and the U.S. military are very careful to avoid civilian casualties. In May 2013, he declared in a speech at the National Defense University, “before any strike is taken, there must be near-certainty that no civilians will be killed or injured the highest standard we can set.”

Nevertheless, of the nearly 3,852 people killed by drone strikes, 476 have reportedly been civilians. The Open Society Justice Initiative (OSJI), which examined nine drone strikes in Yemen, concluded that civilians were killed in every one. Amrit Singh, a senior legal officer at OSJI and primary author of the report, said “We’ve found evidence that President Obama’s standard is not being met on the ground.”

In 2013, the administration released a fact sheet with an additional requirement that “capture is not feasible” before a targeted killing can be carried out. Yet the OSJI also questioned whether this rule is being followed. Suspected terrorist Mohanad Mahmoud Al Farekh, a U.S. citizen, was on the Pentagon’s “kill list” but he was ultimately arrested by Pakistani security forces and will be tried in a U.S. federal court.

“This is an example that capturing can be done,” according to Micah Zenko of the Council on Foreign Relations.

The fact sheet also specifies that in order to use lethal force, the target must pose a “continuing, imminent threat to U.S. persons.” But the leaked Justice Department white paper says that a U.S. citizen can be killed even when there is no “clear evidence that a specific attack on U.S. persons and interests will take place in the immediate future.”

This renders the imminency requirement a nullity. Moreover, if there is such a low bar for targeting a citizen, query whether there is any bar at all for killing foreigners.

There must also be “near certainty” that the terrorist target is present. Yet the CIA did not even know who it was slaying when the two hostages were killed. This was a “signature strike” that targets “suspicious compounds” in areas controlled by “militants.”

Zenko says, “most individuals killed are not on a kill list, and the [U.S.] government does not know their names.” So how can one determine with any certainty that a target is present when the CIA is not even targeting individuals?

Contrary to popular opinion, the use of drones does not result in fewer civilian casualties than manned bombers. A study based on classified military data, conducted by the Center for Naval Analyses and the Center for Civilians in Conflict, concluded that the use of drones in Afghanistan caused 10 times more civilian deaths than manned fighter aircraft.

Moreover, a panel with experienced specialists from both the George W. Bush and Bill Clinton administrations issued a 77-page report for the Stimson Center, a nonpartisan think tank, which found there was no indication that drone strikes had advanced “long-term U.S. security interests.”

Nevertheless, the Obama administration maintains a double standard for apologies to the families of drone victims. “The White House is setting a dangerous precedent that if you are western and hit by accident we’ll say we are sorry,” said Reprieve attorney Alka Pradhan, “but we’ll put up a stone wall of silence if you are a Yemeni or Pakistani civilian who lost an innocent loved one. Inconsistencies like this are seen around the world as hypocritical, and do the United States’ image real harm.”

It is not just the U.S. image that is suffering. Drone strikes create more enemies of the United States. While Faisal Shahzad was pleading guilty to trying to detonate a bomb in Times Square, he told the judge, “When the drones hit, they don’t see children.”

Americans are justifiably outraged when we hear about ISIS beheading western journalists. Former CIA lawyer Vicki Divoll, who now teaches at the U.S. Naval Academy, told the New Yorker’s Jane Mayer in 2009, “People are a lot more comfortable with a Predator [drone] strike that kills many people than with a throat-slitting that kills one.” But Americans don’t see the images of the drone victims or hear the stories of their survivors. If we did, we might be more sympathetic to the damage our drone bombs are wreaking in our name.

Drone strikes are illegal when conducted off the battlefield. They should be outlawed. Obama, like Bush before him, opportunistically defines the whole world as a battlefield.

The guarantee of due process in the U.S. Constitution as well as in the International Covenant on Civil and Political Rights must be honored, not just in its breach. That means arrest and fair trial, not summary execution.

What we really need is a complete reassessment of Obama’s continuation of Bush’s “war on terror.” Until we overhaul our foreign policy and stop invading other countries, changing their regimes, occupying, torturing and indefinitely detaining their people, and uncritically supporting other countries that illegally occupy other peoples’ lands, we will never be safe from terrorism.

Marjorie Cohn is a professor at Thomas Jefferson School of Law, past president of the National Lawyers Guild, and deputy secretary general of the International Association of Democratic Lawyers. Her most recent book is Drones and Targeted Killing: Legal, Moral, and Geopolitical Issues.

5 comments for “Double Standards and Drones”