Though the First Amendment protected the right of American Nazis to march through Jewish neighborhoods of Skokie, Illinois, in 1978, the provocation was universally condemned. Now, an Islamophobic group is posting Muslim-bashing ads on Philadelphia buses, notes Lawrence Davidson.

On April 1, an anti-Muslim advertisement started appearing on 84 municipal buses in the Philadelphia regional area. The ad space was purchased for a four-week period by the American Freedom Defense Initiative (AFDI), which paid $30,000 to run its message: a picture from the early 1940s of Adolf Hitler speaking to Amin al-Husseini, the Grand Mufti (chief Muslim religious authority) of Jerusalem, with an accompanying text, “Islamic Jew Hatred: It’s in the Quran” and a call to “end all aid to Islamic countries.”

Philadelphia is just the latest city to experience this sort of offensive Islamophobia. Indeed, running Islamophobic attack ads on transit systems across the nation seems to be AFDI’s specialty. 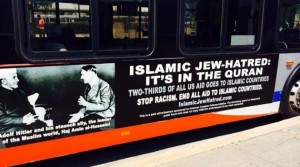 The Islam-hating poster displayed on buses in Philadelphia. (Photo via Forward)

The AFDI is part of an extremist organization called Stop Islamization of America (SIOA), which is led by the hyperactive Islamophobe and strident rightwing Zionist Pamela Geller. The Southern Poverty Law Center, which has long tracked right-wing extremist organizations, has labeled the SOIA a “hate group.”

Philadelphia’s regional transit authority (SEPTA) tried to refuse the advertisement because it so blatantly did what it incorrectly alleged the Quran does – promote hatred. But the AFDI took SEPTA to court and won with a freedom of speech argument.

The ad now appearing in the Philadelphia area is actually a piece of propaganda. There is no accurate context given for the photo it displays, and the reference to the Quran lacks a citation. So let’s fill in what is missing with some analysis.

-The Photograph of the Grand Mufti Speaking to Hitler: Amin al-Husseini (1895-1974) was a member of a leading family in Jerusalem. Early in the British occupation of Palestine he was appointed Grand Mufti of Jerusalem, making him one of the most influential Muslim leaders in the colony.

The British assumed they could control Husseini, who was only 26 years old at the time, and hoped that his appointment would placate Arab nationalist feelings. However, they had seriously underestimated him. Husseini’s goal was to achieve independence for Arab Palestine, and that made him a staunch opponent of the Zionist colonial project.

When a major anti-colonial Arab revolt broke out in 1936, the British mistakenly believed that Husseini was one of its major organizers and sought to arrest him. If they had managed to do so he probably would have been deported to one of Britain’s African colonies. To avoid this fate, Husseini fled to Iraq, which at this time was also a British colony in open revolt. When the British suppressed the Iraqi rebellion, Husseini fled to Fascist Italy from where he was eventually moved to Germany.

The advertisement that now appears on Philadelphia area buses shows Husseini speaking with Adolf Hitler. The implication, which is false, is that Palestine’s Muslim religious leader was himself a Nazi. If one does the research, one can find other pictures and documents that show Husseini recruiting Muslim soldiers in the Balkans to fight in the German army. He also did propaganda broadcasts in Arabic for the Germans urging resistance to British imperialism.

Thus, it cannot be denied that he collaborated with Nazi Germany during the war years. However, none of this activity was undertaken because he was a Nazi. It was done because he was opposed to British imperial rule in Palestine and other Arab territories. If the British had been at war with Sweden instead of Germany, Husseini would have sought refuge among the Swedes and broadcast propaganda for them.

The same can be said for Husseini’s attitude toward a Jewish Palestine. He was adamantly against it. When he proclaimed, as part of his pro-German propaganda, that he wished to see Jews driven from the Arab lands, the most logical interpretation of this statement is that it was Zionist Jews he sought expelled, for in other statements to German leaders of the time he said the best solution for Palestine was for the Jews to go back to their countries of origin.

Thus, Husseini’s statement seems to have no relevance for Palestine’s indigenous Sephardic Jews. There is no convincing evidence that he supported the Holocaust (though he was aware of it) despite an on-going Zionist effort to make it appear that he did.

Whatever one might think of the Mufti’s activities in wartime Germany, he was driven to them not by any belief in Nazi doctrines, but by the ongoing oppression of his native land by British policies in support of Zionist ambitions. Much like the British and American wartime alliance with Joseph Stalin’s Soviet Union or, for that matter, the U.S. alliance with Osama bin Laden and the Mujahedin in Afghanistan, Husseini’s alliance with Hitler’s Germany was a function of the enemy of my enemy is, at least for the moment, my friend.

– “Jew Hatred” and the Quran: The AFDI bus ad goes on to declare that “Jew Hatred” can be found in the Quran. It is hard to take such a charge seriously, because the Quran, like the Old and New Testaments, is a book of scripture in which one can find, and then misinterpret, almost anything one wants.

Thus, through selective and out-of-context quoting, or by simple innuendo, one can make outrageous accusations. Of course, the present bus ad forgoes quotation or citation and just makes an unsupported declaration.

One has to keep in mind that the Quran is approximately 1,500 years old, and so framing the attitude of all modern Muslims in terms of a few statements critical of early Seventh-Century Jews (while ignoring statements that are positive) is like saying that all educated English people dislike Jews because they revere the same Shakespeare who, in the late Sixteenth Century, wrote the Merchant of Venice.

Actually, if you compare the Quran and the Old Testament on the violent treatment of “the other,” the Old Testament is much worse. It is a very bloody affair (for instance, see book 1 of Samuel), featuring a wrathful deity who arranges cruel fates for any group that gets in the way of ancient Hebrews.

My personal opinion is that such a God deserves to be avoided rather than worshipped. On the other hand, the Quran’s portrayal of hell is pretty awful, but then its pains and tortures are attributed to that same wrathful deity found in the Old Testament.

Just to be even-handed on this topic, the New Testament’s Book of Revelation seems to inspire many Christian fundamentalists to earnestly yearn for global annihilation.

-Stop the Aid!: Finally, the ad calls for a halt to aid going to Islamic countries. Actually, this might not be a bad idea, considering that a lot of this aid is made up of loan guarantees to dictatorships for the purchase of U.S. weapons. If we could balance this out by halting the yearly $3 billion-plus in aid to Israel, we would have a win-win situation. However, on both counts the U.S. munitions manufactures would scream bloody murder (pun intended) because they are the ones profiting from such “aid.”

When a bigoted extremist like Pamela Geller places misleading and hate-promoting propaganda on buses, the Zionist establishment has nothing critical to say. They treat it as if it is all very proper and upheld by “free speech.”

However, when supporters of the Palestinian cause put up billboards picturing a series of maps that show the absorption of Arab Palestine by Zionist settlers between1948 and today, pious rabbis and Zionist lobbyists protest and call it “anti-Semitic.” Hypocrisy is the name of the game.

This is all about the ongoing battle to control the message: that is the history and reporting of the Israeli-Palestinian conflict. In the early 1970s, when I started supporting the Palestinian cause, the Zionists had a near monopoly on that message. There were almost no venues that would allow someone who was pro-Palestinian to speak or publish, and on the rare occasion that one found a platform, one was subjected to heckling and threats.

The situation has really changed. At least outside of the Washington Beltway, those who support Palestinian rights are on the offensive, and the Zionists on the defensive. However, the Zionists certainly have not given up, and the most egregious of them, such as those at the AFDI, still lash out with hate-filled messages. So, the fight goes on.

15 comments for “Anti-Islam Hate in City of Brotherly Love”