Exclusive: American neocons are in a lather over Russia’s decision to go ahead with the sale of anti-aircraft missiles to Iran. The apparent outrage is that Iran thinks it has a right to protect its citizens from Israel’s right to launch airstrikes into Iran’s territory, as ex-CIA analyst Ray McGovern explains.

The front page of the neocon flagship Washington Post on Tuesday warned that the Russians have decided, despite U.S. objections, “to send an advanced air-defense system to Iran … potentially altering the strategic balance in the Middle East.”

So, at least, says the lede of an article entitled “Putin lifts 5-year hold on missile sale to Iran” by Karoun Demirjian, whose editors apparently took it upon themselves to sex up the first paragraph, which was not at all supported by the rest of her story which was factual and fair balanced, even. 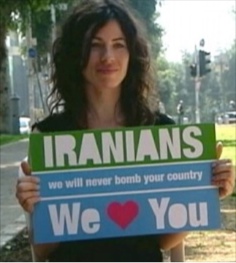 An Israeli who joined a public campaign in 2012 to discourage an Israeli war against Iran.

Not only did Demirjian include much of Russian Foreign Minister Sergei Lavrov’s explanation of Moscow’s decision to end its self-imposed restriction on the delivery of S-300 surface-to-air missiles to Iran, but she mentioned Israeli Prime Minister Benjamin Netanyahu’s umpteenth warning on Monday about “the prospect of airstrikes to destroy or hinder Tehran’s nuclear program.”

Lavrov noted that United Nations resolutions “did not impose any restrictions on providing air defense weapons to Iran” and described the “separate Russian free-will embargo” as “irrelevant” in the light of the “meaningful progress” achieved by the negotiated framework deal of April 2 in which Iran accepted unprecedented constraints on its nuclear program to show that it was intended for peaceful purposes only.

The Russian Foreign Minister emphasized that the S-300 is a “completely defensive weapon [that] will not endanger the security of any state in the region, certainly including Israel.” Pointing to “the extremely tense situation in the region around Iran, he said modern air-defense systems are vitally important for that country.” Lavrov added that by freezing the S-300 contract for five years, Russia also had lost a lot of money. (The deal is said to be worth $800 million.)

Predictably, former U.S. Ambassador to the United Nations John Bolton told Fox News that the air-defense system would be a “game-changer” for Israel regarding air strikes. According to Bolton, once the system is in place, only stealth bombers would be able to penetrate Iranian space, and only the U.S. has those and was not likely to use them.

The U.S. media also highlighted comments by popular go-to retired Air Force three-star General David A. Deptula, who served as Air Force deputy chief of staff for intelligence, surveillance and reconnaissance until he retired in 2010 to make some real money. Deptula called delivering the S-300 system to Iran “significant, as it complicates the calculus for planning any military action involving air strikes.”

It strikes me as a bit strange that the media likes to feature retired generals like Deptula, whose reputation for integrity are not the best. Deptula has been temporarily barred from doing business with the government after what Air Force Deputy General Counsel Randy Grandon described as “particularly egregious” breaches of post-employment rules. He remains, however, a media favorite.

Adding to his woes, Deptula was also caught with 125 classified documents on his personal laptop including 10 labeled “Secret,” 14 labeled “Top Secret” and one with the high protection of “Secret, Compartmented Information.” Deptula pleaded ignorance and was let off further proof that different standards apply to generals like Deptula and David Petraeus.

The S-300 announcement hit as Secretary of State John Kerry was testifying on Capitol Hill about the framework deal on Iran’s nuclear program. Speaking later to Fox News, Rep. Adam Kinzinger, R-Illinois, professed shock that Kerry did not seem more upset. According to Kinzinger, Kerry actually said, “You have to understand Iran’s perspective.”

And in keeping with Kerry’s tone of sang-froid, State Department spokeswoman Marie Harf, referring to the S-300 deal, said, “We see this as separate from the negotiations [regarding Iran’s nuclear program], and we don’t think this will have an impact on our unity.”

White House press secretary Josh Earnest took the S-300 announcement with his customary, studied earnestness. Referring not only to the decision to deliver the S-300s but also to reports of a $20 billion barter deal that would involve Russia buying 500,000 barrels of oil a day in return for Russian grain, equipment and construction materials, Earnest referred to “potential sanctions concerns” and said the U.S. would “evaluate these two proposals moving forward,” adding that the U.S. has been in direct touch with Russia to make sure the Russians understand and they do the potential concerns that we have.”

With respect to the various sanctions against Iran, I believe this nonchalant tone can be seen largely as whistling in the dark. With the S-300 and the barter deals, Russia is putting a huge dent in the sanctions regimes. From now on, money is likely to call the shots, as competitors vie for various slices of the Iranian and the Russian pie. Whether or not there is a final agreement by the end of June on the Iranian nuclear issue, Washington is not likely to be able to hold the line on sanctions and will become even more isolated if it persists in trying.

Worse still for the neocons and others who favor using sanctions to punish Russia over Ukraine, the lifting of sanctions against Iran may have a cascading effect. If, for example, the Ukrainian ceasefire holds more or less over the next months, it is possible that the $1.5 billion sale of two French-built Mistral-Class helicopter carrier ships to Russia, concluded four years ago, will go through.

The contract does not expire for two months and Russia’s state arms exporter is trying to work out a compromise before taking France to court. Russian officials are expressing hope that a compromise can be reached within the time left.

And, regarding the outrage among neocons over the audacious idea that Iran should be allowed to defend itself against airstrikes, there is the “exceptional” argument that Israel, United States and their allies should have the unchallenged right to bomb Iran or any other country as they see fit and that the targeted country should have no right to protect its people, indeed that trying to defend itself is some kind of unacceptable provocation.

There is also the hypocrisy regarding how the neocons like to differentiate between “defensive” and “offensive” weapons when the question is about giving U.S.-backed governments weapons that have dual purposes, that can be used offensively as well as defensively.

For instance, in regard to Ukraine earlier this year, U.S. Assistant Secretary of State Victoria Nuland counseled U.S. officials to portray the delivery of sophisticated U.S. military hardware to the coup regime in Kiev as “defensive,” even though the weapons had an offensive capacity, such as targeting ethnic Russian rebels firing artillery or mortars at Ukrainian troops attacking eastern Ukraine.

According to the German newspaper, Bild, which published an intercepted conversation between Nuland and U.S. officials in Munich, Germany, she said, “I’d strongly urge you to use the phrase ‘defensive systems’ that we would deliver to oppose Putin’s ‘offensive systems.’”

However, NATO Commander and Air Force General Philip Breedlove left little doubt that these “defensive” weapons would help the Ukrainian government pursue its military objectives by enabling more effective concentration of fire. “Russian artillery is by far what kills most Ukrainian soldiers, so a system is needed that can localize the source of fire and repress it,” Breedlove reportedly said.

So, when “defensive” weapons help a U.S.-backed regime kill its opponents, that’s fine. However, if some truly defensive weapons, such as anti-aircraft missiles to protect a country’s cities, go to a nation that Israel might want to bomb, then that is unacceptable.

Ray McGovern works with Tell the Word, a publishing arm of the ecumenical Church of the Saviour in inner-city Washington. During his earlier, 27-year career as a CIA analyst, he led the Soviet Foreign Policy Branch and prepared and briefed the President’s Daily Brief.  He now serves on the Steering Group of Veteran Intelligence Professionals for Sanity (VIPS).

22 comments for “Russia Impinges on Israeli ‘Right’ to Bomb Iran”