The racist dishonesty of Israeli Prime Minister Netanyahu has challenged Judaism’s humanistic principles, as many young Jews will now flip the Passover script, putting the Palestinians in the position of Moses demanding “Let my people go” or give them the vote in one state, writes Rabbi Michael Lerner.

What makes this year’s Passover Seders unlike any others is that a majority of American Jews have been forced to face the fact that Palestinians today are asking Jews what Moses asked Pharaoh: “Let my people go.”

The Israeli elections, and subsequent support for Prime Minister Benjamin Netanyahu’s open racism and obstinate refusal to help create a Palestinian state, is not playing well with many younger Jews, and they will be challenging their elders to rethink their blind support for Israeli policies. 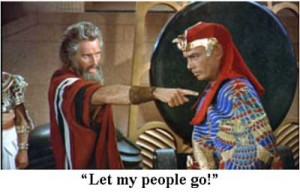 Charlton Heston (as Moses) confronting Yul Brynner (as the Pharaoh) in “The Ten Commandments.”

Increasingly, young Jews are on the Moses side, and see Netanyahu as the contemporary Pharaoh. So at the Seder more and more Jews will be asking Israel to “let the Palestinian people go.”

The easiest way â€‹for Israel â€‹to â€‹allow Palestinians their freedom is to create a politically and economically viable Palestinian state living in peace with Israel and based on the 1967 borders of Israel with slight border changes to allow Israel to incorporate the settlements in Gush Etzion and Jewish parts of Jerusalem that were built on conquered Arab land in 1967.

The terms for that agreement were well worked out by “The Geneva Accord” developed by former Yitzhak Rabin aide (and Ehud Barak’s Minister of Justice) Yossi Beilin, and would include Jerusalem serving as the capital of both states, massive reparations to the Palestinian people to help fund such a state (paid in part by the international community), and joint police and military cooperation, supplemented by international help, to deal with the inevitable acts of terror from both Israeli and Palestinian terrorists who would want to block any such agreement.

Though Prime Minister Netanyahu has now sought to back away from his unequivocal election commitment in mid-March that he would never allow Palestinians to have a separate state, it is clear to most American Jews that he was telling the truth to his own community when he made that commitment.

Only a fully unambiguous embrace of a detailed plan for ending the Occupation of the West Bank and the blockade of Gaza, and major unilateral acts on Israel’s part to begin to implement the creation of a Palestinian state, would be believed by any Palestinians at this point. And who can blame them?

But Netanyahu, like Pharaoh, has a hardened heart. Like Pharaoh’s dealings with Moses, he is likely to make statements seeking to appease the people he holds in bondage on the West Bank and Gaza, but when it comes to actions, he will give little but token steps that are not close to the freedom the Palestinian people rightly ask for themselves.

In a tragic reversal, we who had been oppressed now oppress, as though the psychological dynamic of the victim identifying with the oppressor is now playing out in a way that brings dishonor to the revolutionary vision of freedom that the Jewish people brought to the world and have celebrated for at least 2,000 years as central to Judaism.

Not that we had no warning, our Torah explicitly repeats over and over versions of the following theme: “When you come into land, do not oppress the stranger/other, remember that you were the stranger/other in the Land of Egypt.”

Given this reality, many Jews, and a disproportionately larger number of young Jews, will be asking a provocative question at their Seder tables: “If Israel won’t let the Palestinian people have their own state, then don’t we have to insist that the Palestinians in the West Bank and Gaza be given the vote?

“After 45 years of Occupation and subordination to the Israeli government, Israel can no longer claim to be a democratic society while denying the vote to those Palestinians who live under Occupation.

“If West Bank Palestinians and Gazans are not allowed the same rights as Jews living next door to them in West Bank settlements, how can we pretend that Israel is not acting as an oppressor and forsaking any claim to be a democracy?”

The call for “One Person, One Vote” has a strong resonance with the American people and with most people on the planet. It may even resonate with many Israelis who have memories of what it was like to live in societies that did not give Jews equal rights. But for other Israelis, that demand might be the one thing that would open them up to the need for the immediate creation of a separate Palestinian state.

Fearful that giving Palestinians in the West Bank and Gaza the same rights already given to Palestinians living within the pre-’67 borders of Israel might give Palestinians real power to influence the outcome of elections, they might respond in the same panic that led Netanyahu to scare Israelis that they had better get out to vote because Israeli Palestinians were already going to the polls in large numbers.

The Palestinian Authority might find that adopting the demand for “â€‹One Person, One Vote”â€‹ might be the most powerful way to get the two states they’ve unsuccessfully sought up till now.

In my view, two states are preferable to trying a forced marriage between two peoples that have so much mutual suspicion they need a clean divorce, not a shotgun wedding! But since Israel won’t give that divorce any other way, the demand for a fair marriage is better than Palestinians remaining a de facto slave to Israeliâ€‹ fears and Israeli power.

Passover Seders are all about asking important questions, this year, many American Jews are likely to be  asking how Jews can celebrate our own freedom without insisting that Israel “Let their people go” or at least give them the vote!

Many younger Jews are good at sniffing out hypocrisy, and they may be causing a heated debate at any Seder that avoids this question.

Rabbi Michael Lerner is editor of Tikkun Magazine, chair of the interfaith and secular-humanist-welcoming Network of Spiritual Progressives, www.spiritualprogressives.org and rabbi of Beyt Tikkun Synagogue-Without Walls in San Francisco and Berkeley, California. He welcomes your responses and invites you to join with him by joining the Network of Spiritual Progressives (membership in which also brings you a subscription to Tikkun Magazine). RabbiLerner.Tikkun@gmail.com. [This story previously appeared at Salon.com.]