From Editor Robert Parry: As a unique thank-you gift for our spring drive, we are offering a DVD of last year’s feature film “Kill the Messenger” telling the tragic story of how the mainstream U.S. news media destroyed journalist Gary Webb plus a CD of Webb and me discussing the Contra-cocaine scandal in 1996.

That troubling scandal and the role of major U.S. newspapers in covering up U.S. government complicity marked a disturbing turning point in the course of American democracy, as it became clear that the American people could no longer trust the mainstream press to serve as a watchdog on government.

It was my recognition of that turn after a career at AP, Newsweek and PBS Frontline including work exposing the Contra-cocaine scandal in 1985 that led me to start Consortiumnews.com as a home for independent investigative journalism that put informing the public ahead of cozying up to officialdom. 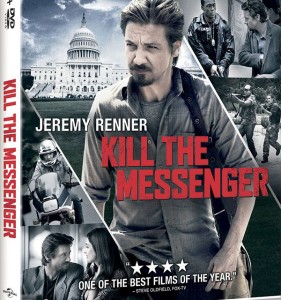 As a thank-you gift for donations of $150 or more, you can get the just-released DVD of “Kill the Messenger,” starring Jeremy Renner as the late Gary Webb, and a CD of a 1996 joint appearance by Webb and Robert Parry discussing the Contra-cocaine scandal.

To keep this Web site going, we are trying to raise $35,000 in our spring fund drive and we are offering the DVD/CD gift to people who donate $150 or more. If you can’t give that much, we’d be happy to send you the CD of Webb and me for whatever you can afford to give.

To donate to our tax-exempt non-profit, you can use a credit card online (we accept Visa, Mastercard or Discover) or you can mail a check to Consortium for Independent Journalism (CIJ); 2200 Wilson Blvd., Suite 102-231; Arlington VA 22201. For readers wanting to use PayPal, you can address contributions to our account, which is named after our e-mail address: “consortnew @ aol.com”. (Since we are a 501-c-3 non-profit, donations by American taxpayers may be tax-deductible.)

If you wish to get one of the thank-you gifts, just follow up your donation with an email to us at consortnew@aol.com with instructions on where to mail it. We’ll pay the shipping charges.

Another contribution option is to donate stock or other equities, which can offer a tax advantage to you if the stock has appreciated in value. If this stock-donation option appeals to you, I suggest you discuss it with your broker and then contact me at consortnew@aol.com for specific instructions on how to transfer the stock.

Again, thanks for your support and for making our nearly two decades of honest journalism possible.

← What Netanyahu Has Wrought
Ukraine’s Oligarchs Turn on Each Other →