The world might find the goofy behavior of the “last remaining superpower” comical if it weren’t so scary. Though Democrats surely have their share of unfunny clowns, the Republicans took center stage in this circus of buffoonery with an open letter to Iran advertising U.S. unreliability, ex-CIA analyst Paul R. Pillar notes.

Sen. Tom Cotton’s sophomoric stunt of an open letter to the Iranians telling them not to have confidence in whatever the United States puts on the negotiating table has received the broad and swift condemnation it deserves. Some of the strong criticism has come from editorial pages and other sources of commentary that generally are not very friendly toward the Obama administration in general or even to its policies on Iran in particular.

A bright side to this incident that embarrasses and disgraces half of the United States Senate comes in the clarity it provides in terms of what games are being played and what is at stake. Even before this latest antic, Cotton deserved credit for being more honest about his objective than most of his colleagues who are engaged in the same destructive efforts to undermine diplomacy on Iran. 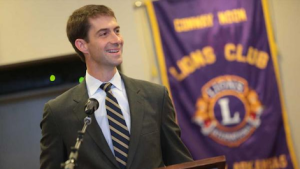 Cotton, an Arkansas Republican, has stated openly and explicitly that his goal is to kill off any agreement at all with Iran. Unlike many others, he has not tried to fool us with the subterfuge that legislative sabotage is aimed at getting a chimerical “better deal” with Iran. Now with the letter, the unwritten alliance between American hardliners and Iranian hardliners in opposing any agreement is made more open than ever.

What is going on here is not just the work of Tom Cotton. The outrageous letter to the Iranians flows naturally from a broader ongoing process. The fact that the great majority of Republican senators signed the letter is the most obvious indication of that.

There no doubt is today much regret in the senatorial offices involved, but the fact is that 47 of them signed it. There are a couple of possible interpretations of what took place among the members, neither of which makes those members look good.

One is that they are so distracted or careless that they can let a 37-year-old who has been in the Senate only two months rope them into doing something this stupid. The other, which is the more plausible interpretation, is that Cotton’s letter was only the latest vehicle for a journey that the whole party has already been taking for some time.

The letter was a natural next step after bringing Israeli Prime Minister Benjamin Netanyahu to the Capitol for the express purpose of denouncing and opposing U.S. policy toward Iran. In each case it was a matter of Congressional Republicans enlisting foreigners to try to sabotage a major element of current U.S. foreign policy.

Because Israel is considered an “ally,” Netanyahu got to use the podium in the House chamber whereas Iranian hardliners do not get that privilege. But the fundamental nature and purpose of what was taking place was the same.

The impact of all of this on the immediate prospects for completing a nuclear deal between the P5+1 (the five permanent members of the UN Security Council plus Germany) and Iran is certainly important and has been the subject of much of the immediate commentary about the letter. There is a basis for optimism that this clownish overplaying of their hand by some of those who would like to sabotage the diplomacy will lessen the danger of such sabotage.

The episode at least demonstrates why, if one wants U.S. policy toward Iran to be formulated and executed in a responsible and adult way, then for the time being the less Congressional involvement there is the better.

We ought to reflect also, however, on how the kind of irresponsible behavior we have just seen is part of a bigger pattern that goes well beyond policy toward Iran and has deleterious effects on U.S. interests abroad besides what happens to an Iranian nuclear deal. This behavior damages U.S. credibility.

There is an irony here in that some of those who signed Cotton’s letter have been among those who have bemoaned supposed diminishing of America’s international credibility because of other matters, usually involving issues of whether the United States should persist in prosecuting overseas military operations where any direct U.S. interests being protected are questionable.

U.S. credibility is not determined by military doggedness in such situations. It is partly determined by the United States living up to negotiated multilateral agreements that are clearly in its interests, as would be the case with a P5+1 agreement to restrict Iran’s nuclear program. Probably the single most remarkable, and egregious, aspect of the Cotton letter is that it was blatantly and expressly designed to damage U.S. credibility.

In the future, it will lack credibility for any signatory of this letter to complain about alleged damage to U.S. credibility regarding anything else.

The connection between the sort of behavior we are talking about and the standing of the United States overseas, however, is even broader than that and extends to the handling of domestic policy. Foreigners and foreign governments observe how the United States, the superpower with the world’s largest economy, handles its own affairs, and they draw conclusions about how viable and reliable an interlocutor the United States would be on international matters.

The foreigners are looking to see whether there is consistency and rationality in how the U.S. political system pursues U.S. national interests. If they do see those things, then the United States is someone they can do business with, whether as a rival or as an ally, even if U.S. interests differ from their own. If they do not see those things, then opportunities are lost for doing business that would benefit both the United States and the foreign state.

A nation does not represent itself as a viable interlocutor, whose execution of policy can be trusted by other nations, if passionate internal divisions supersede sober pursuit of the nation’s interests. As an outsider we encounter such situations in, say, Iraq, where sectarian loyalties and hatreds make it impossible to rely on a government in Baghdad consistently pursuing an Iraqi national interest.

We also see it in Bangladesh, where the personal animosity between the “two begums” who head each of the major political parties there have made Bangladeshi politics so dysfunctional that in the recent past the military has had to step in.

A pattern that is similar in some respects has, tragically, come to prevail in the United States. Foreigners could hear the then minority (now majority) leader of the United States Senate state a few years ago that his number one priority was not any particular U.S. national interest in either domestic or foreign affairs but instead the prevention of a second term for the incumbent U.S. president. Foreigners then were able to see the senator’s party act along the same lines, using extortionate legislative methods to push a partisan agenda even at the expense of damaging the country’s credit rating and causing disruptive interruptions to government operations.

Once the same party achieved a majority in both houses of Congress there was much talk about how this would lead to newly responsible behavior, but the opening gavel of the new Congress had hardly fallen when once again there was the tactic of holding the operations of a government department hostage to press a specific partisan demand (this time on immigration) in opposition to the president’s policies.

Foreigners can see today in the same party an animosity toward the other party and especially to the current U.S. president that is as passionate as the sectarian hatreds in Iraq or the personal hatreds between the begums in Bangladesh, and that leads to at-all-costs efforts to defeat any achievements by this president.

The biggest such achievement in foreign policy would be an accord to restrict the Iranian nuclear program, hence all the pulling out of stops, aided by the role of Netanyahu and the Iranian hardliners, to defeat such an agreement.

The biggest achievement in domestic policy has been the Affordable Care Act, hence while those proverbial crumbling roads and bridges in the U.S. infrastructure continue to crumble, the House of Representatives spends its time and effort on voting 56 times to repeal the Act. The campaign to destroy Obamacare has become an Ahab-against-the-white-whale obsession that is being endlessly pursued despite mounting evidence of the Act’s success; observant foreigners must be shaking their heads wondering how a country in which such obsessions govern the political system ever got to be a superpower.

The closing of eyes even to the performance of public programs within the United States is but one example of an all-too-conspicuous denial of reality on other matters. Sen. James Inhofe, chairman of the Senate Environment and Public Works Committee, gave another demonstration of this the other day when he tossed a snowball in the Senate chamber to emphasize his disbelief in climate change, a prank that rivals what the youngster Cotton has done in demeaning the world’s supposedly greatest deliberative body.

The foreign perceptions of all this that matter include not only whether CO2-belching China will live up to its side of international agreements to save the planet but also more broadly what foreigners think about the prospect of doing any business on anything with a government that has a major part of it so far apart from the reality-based community and so disinclined to work responsibly on behalf of its own national interests.

Sen. Cotton’s letter deserves all the scorn it has received as far as the Iranian nuclear issue is concerned. It also should dismay us because of the bigger problem it illustrates of domestic political passions undermining the standing of the United States in the world and its ability to do business with the rest of the world.

4 comments for “How the GOP Undermines America”