For a decade after Iran’s Islamic revolution, Israel quietly armed the regime which Prime Minister Netanyahu now condemns as an “existential threat.” What caused the shift? Part of the reason was and remains domestic Israeli politics and managing the U.S. relationship, writes Gareth Porter.

Western news media has feasted on Prime Minister Benjamin Netanyahu’s talk and the reactions to it as a rare political spectacle rich in personalities in conflict. But the real story of Netanyahu’s speech is that he is continuing a long tradition in Israeli politics of demonizing Iran to advance domestic and foreign policy interests.

The history of that practice, in which Netanyahu has played a central role going back nearly two decades, shows that it has been based on a conscious strategy of vastly exaggerating the threat from Iran. 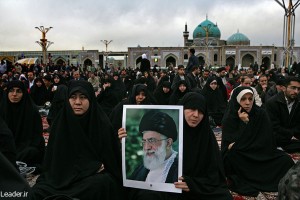 In conjuring the specter of Iranian genocide against Israelis, Netanyahu was playing two political games simultaneously. He was exploiting the fears of the Israeli population associated with the Holocaust to boost his electoral prospects while at the same time exploiting the readiness of most members of U.S. Congress to support whatever Netanyahu orders on Iran policy.

Netanyahu’s primary audience was the Israeli electorate. He was speaking as a candidate for re-election as prime minister in an election that is just two weeks away. His speech was calculated to play on the deep-rooted anxiety of Israeli voters about the outsiders who may want to destroy the Jewish people.

Netanyahu reminded his Israeli audience that, “In our nearly 4,000 years of history, many have tried repeatedly to destroy the Jewish people.” That was an obvious allusion to the annual Jewish ritual at Passover of repeating the warning that “in every generation they have risen up against us to annihilate us.”

But Netanyahu drew a parallel between the story in the book of Esther about a “powerful Persian viceroy who plotted to destroy the Jewish people 2,000 years ago” and “another attempt by another Persian potentate to destroy us.”

Netanyahu was taking advantage of what former Israeli deputy national security adviser Chuck Freilich calls the “Holocaust Syndrome” or “Masada complex” that is woven into the fabric of Israeli politics. His ranting about an Iran intending to wipe out the entire country has appealed especially to his Likud constituency and other Israelis who believe that the outside world is “permanently hostile” to the Jewish people.

Other Israeli prime ministers have played the Holocaust card for domestic purposes too. Yitzhak Rabin actually started it during his tenure as Prime Minister from 1992 to 1995, pointing to the alleged “existential threat” from Iran in order to justify his policy of negotiating with the PLO. It was also Rabin who established the propaganda theme of Iran as a terrorist threat to Jews across five continents that Netanyahu continues to cite today.

Later, however, Netanyahu would use the alleged Iranian threat to do exactly the opposite refuse to reach an agreement with the Palestinians. Many former senior military and intelligence officials have never forgiven Netanyahu for what they consider a reckless policy toward Iran that they link to his failure to deal with the Palestinian problem.

The demonization of Iran has also served Netanyahu’s political interest in manipulating the policy of the U.S. government and other world powers. By portraying Iran as bent on the genocide of the Israeli Jews, Netanyahu has sought to get the Americans to threaten war against Iran, hoping for a real military confrontation that would lead to actual war with Iran that would reduce that country’s power. A key element in Netanyahu’s manipulation of the United States and other nations has been the suggestion that it if they don’t take care of the problem he may be forced to attack Iran’s nuclear facilities.

He has failed to achieve that maximum objective, but he has been successful in his lesser objective of getting the United States to organize a system of “crippling sanctions” against Iran.

The portrayal of Iran as a serious threat to Israel’s existence has been serving Israeli diplomatic interests ever since Rabin reversed more than a decade of low-key policy toward the Islamic Republic and suddenly began claiming that Iran would have nuclear weapons and missiles capable of hitting Iran within three to seven years and appealed to the United States to stop it. The government even hinted in January 1995 that it might have to attack Iran’s nuclear reactors (Iran had only one) as it had done against Iraq 12 years earlier.

Rabin, who did view Iran as a threat to Israel in the long run, deliberately exaggerated that threat, as one of his advisors later acknowledged, in part to ensure that the United States would continue to see Israel as its irreplaceable ally in the Middle East and not be tempted to come to terms with Iran. In fact, as Rabin’s director of Mossad recalled two decades later, Israeli intelligence still considered Iran to rank much lower than Iraq and other threats to Israel during Rabin’s tenure, because Iran was still preoccupied with Iraq and would have no missile that could reach Israel for many years.

Mossad has also repudiated Netanyahu’s political manipulation of the Iran threat. Since 2012, at least Israeli intelligence has agreed with U.S. intelligence that Iran has not made any decision to try to acquire nuclear weapons. And a series of Mossad chiefs have taken the unprecedented step openly rejecting Netanyahu’s use of the term “existential threat.”

Tamir Pardo, the current chief of Mossad, has said that a nuclear Iran would not necessarily pose an existential threat to Israel even if it did acquire nuclear weapons. His predecessor Meir Dagan, who has made no secret of his disdain for Netanyahu’s handling of policy toward Iran as dangerously reckless, said flatly in 2012, that “Israel faces no existential threat,” and another previous Mossad chief, Ephraim Halevy, has also criticized Netanyahu for talking about an “existential threat” from Iran.

Interestingly, Netanyahu stopped using the term in his AIPAC and congressional speeches, while continuing to make the claim that Iran has genocidal intentions toward Israel.

Netanyahu’s dishonesty on the subject of Iran is best documented by the fact that he was so persuaded by Mossad’s briefing on the subject when he first became prime minister in 1996 that he appointed the Mossad briefer, Uzi Arad, as his national security adviser and abandoned the Labor government’s exaggerated depiction of the threat from Iran’s nuclear and missile program. For six months the Israeli government stopped claiming that Iran was threatening Israel.

What induced Netanyahu to start selling the snake oil of Iran as menace to Israel was not any new evidence of Iranian interest in nuclear weapons or hostility toward Israel. It was the fear of a rapprochement between the Clinton administration and the newly elected Khatami government and the hope of depriving Iran of what was assumed to be Russian assistance for building missiles that could reach Israel.

Netanyahu was alarmed by the signals from both Tehran and Washington in the summer of 1997 indicating interest in reducing tensions between the two countries. That would have represented a real threat to Israel’s political and strategic interests, and he was determined to cut it short. Netanyahu’s response was to start to begin sending messages to Iran through other governments that Israel would carry out pre-emptive strikes against Iranian missile development sites unless it stopped its ballistic missile program.

It was a reckless tactic that would not cause Iran to stop working on missiles, but could well provoke a much tougher Iranian public posture toward Israel. That, in turn, would allow Netanyahu to put pressure on the Clinton administration to steer clear of any warming relations with Iran.

Netanyahu’s indirect threats did cause Iran to focus much more on the potential threat from Israel in its missile program, making Iran and Israel strategic adversaries for the first time. Netanyahu bears personal responsibility for having created a conflict with Iran that had never existed before. But it is not the conflict that he has been alleging all these years.

Gareth Porter is an independent investigative journalist and winner of the 2012 Gellhorn Prize for journalism. He is the author of the newly published Manufactured Crisis: The Untold Story of the Iran Nuclear Scare. [This story first appeared at Middle East Eye.]

← Equal Justice for Petraeus and Snowden?
The Illogic of Netanyahu’s Speech →

23 comments for “Behind Israel’s Hostility toward Iran”