The Democratic majority on the Federal Communications Commission sided with millions of Internet users, voting to prevent the Web from being turned into a high-speed super-highway for some and a slower-speed roadway for many, a victory for free speech and democracy, says Michael Winship.

There was snow in Washington, D.C., Thursday morning, which always throws the federal capital into tailspins. So the marching band that the media reform group Free Press had hired to throw a parade for Federal Communications Commission Chairman Tom Wheeler canceled, the wimps.

Nevertheless, a small, hearty group of activists braved the flurries and slippery streets to gather outside the FCC before the day’s historic meeting. They were there to thank Wheeler and celebrate the imminent passage of new rules to protect Net neutrality and preserve a free and open Internet. 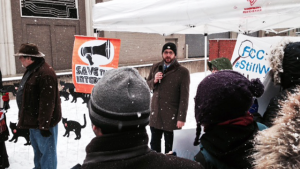 “You did this,” Free Press President Craig Aaron told the gathering, as they held up signs and stamped their feet against the cold. “This is your victory, we did it together. Today, we celebrate. Tomorrow, we defend this win in Congress, in the courts and in the streets.”

Another speaker exclaimed, “It’s snowing and we’re winning Net neutrality,” as former FCC Commissioner Michael Copps, now an adviser to Common Cause, joked, “This is democracy as pure as the driven snow. Who says people power can’t work?” He added, “Don’t be surprised if this isn’t in court by nightfall, but the decision will stand.”

Others anticipated extended saber rattling among members of Congress opposed to Net neutrality, with some worried about a possible conservative attempt to punish the FCC by interfering with its budget.

On Thursday, it was announced that Chairman Wheeler and the four other commissioners, Democrats and Republicans, will testify at a March 18 oversight hearing called by Senate Commerce Committee Chairman John Thune to “allow me and my colleagues to directly question the chairman about the overreaching broadband order.”

But the official decision hadn’t actually been made yet. The FCC meeting did not begin until 10:30 a.m., delayed by the weather. The room was packed; unusual, if not unprecedented for an open commission meeting. The Democratic commissioners arrived first, and then something even more unusual and unprecedented occurred: a sustained, standing ovation as Wheeler took his seat.

Almost the first hour was spent on another decision, preempting state laws in North Carolina and Tennessee and allowing two community broadband providers to expand service. This move by the FCC, another decisive step toward making the Internet more accessible, teed up what was to come next.

Before each commissioner explained how he or she would vote, one last, brief panel told those assembled why Net neutrality was so important. Speakers included Chad Dickerson, CEO of the handicrafts website Etsy; and Veena Sud, writer and executive producer of the TV series The Killing (she explained how an open Internet had saved her series twice: once when fan demand over the web kept the show going; the second time when its final season was bankrolled and distributed by Netflix).

Also appearing, via shaky video from Britain, Tim Berners-Lee, inventor of the World Wide Web, who declared that the new Net neutrality rules would preserve, “the ethos of permissionless innovation.”

Then came Democratic Commissioner Mignon Clyburn “We are here to ensure there is only one Internet,” she said. “We want to enable those with deep pockets as well as those with empty pockets the same opportunities.” She thanked the American people “for your amazing role in framing this historic order. Today, because of your efforts, we are better able to allow millions of Americans to tell their stories.”

Democratic Commissioner Jessica Rosenworcel said, “We have a duty to protect what has made the Internet the most dynamic platform for free speech ever invented. It is our printing press. It is our town square. It is our individual soapbox and our shared platform for opportunity.”

The two Republican commissioners dissented, at length. Ajit Pai claimed, “If this order manages to survive judicial review, these will be the consequences: higher broadband prices, slower broadband speed, less broadband deployment, less innovation, and fewer options for American consumers.” And Michael O’Rielly said that in the new rules, “every bad idea ever floated in the name of Net neutrality has come home to roost” and decried “substantial factual errors underlying the decision.”

Finally, it was Chairman Wheeler’s turn. Just weeks ago, he had been accused of vacillation and undermining Net neutrality with a plethora of ifs and buts that would diminish its effectiveness. But on Thursday he appeared resolute.

Wheeler declared it a “red letter day” and took the vote. As the clock struck 1 p.m. Thursday, he banged down the gavel and another standing ovation erupted as he announced passage of the new rules. At a press conference just minutes later, Wheeler announced, “This is the proudest day of my public policy life.”

You can read here the official FCC press release and the statements of each of the five commissioners.

Michael Winship is the Emmy Award-winning senior writer of Moyers & Company and BillMoyers.com, and a senior writing fellow at the policy and advocacy group Demos. [This article first appeared at billmoyers.com.]