Greece, known as the birthplace of democracy, has seen the popular will thwarted often since World War II, from a brutal rightist coup to today’s austerity-driven depression touched off by financial manipulators, as William Blum describes.

American historian D.F. Fleming, writing of the post-World War II period in his eminent history of the Cold War, stated that “Greece was the first of the liberated states to be openly and forcibly compelled to accept the political system of the occupying Great Power. It was Churchill who acted first and Stalin who followed his example, in Bulgaria and then in Rumania, though with less bloodshed.”

The British intervened in Greece while World War II was still raging. His Majesty’s Army waged war against ELAS, the left-wing guerrillas who had played a major role in forcing the Nazi occupiers to flee. 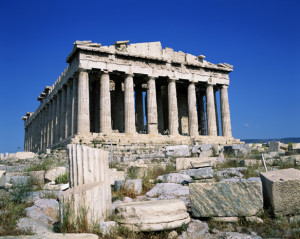 The Parthenon in Athens, standing atop the Acropolis.(Photo credit: BBC)

Shortly after the war ended, the United States joined the Brits in this great anti-communist crusade, intervening in what was now a civil war, taking the side of the neo-fascists against the Greek left. The neo-fascists won and instituted a highly brutal regime, for which the CIA created a suitably repressive internal security agency (KYP in Greek).

In 1964, the liberal George Papandreou came to power, but in April 1967 a military coup took place, just before elections which appeared certain to bring Papandreou back as prime minister. The coup had been a joint effort of the Royal Court, the Greek military, the KYP, the CIA, and the American military stationed in Greece, and was followed immediately by the traditional martial law, censorship, arrests, beatings, and killings, the victims totaling some 8,000 in the first month.

This was accompanied by the equally traditional declaration that this was all being done to save the nation from a “communist takeover”. Torture, inflicted in the most gruesome of ways, often with equipment supplied by the United States, became routine.

George Papandreou was not any kind of radical. He was a liberal anti-communist type. But his son Andreas, the heir-apparent, while only a little to the left of his father, had not disguised his wish to take Greece out of the Cold War, and had questioned remaining in NATO, or at least as a satellite of the United States.

Andreas Papandreou was arrested at the time of the coup and held in prison for eight months. Shortly after his release, he and his wife Margaret visited the American ambassador, Phillips Talbot, in Athens. Papandreou later related the following:

“I asked Talbot whether America could have intervened the night of the coup, to prevent the death of democracy in Greece. He denied that they could have done anything about it. Then Margaret asked a critical question: What if the coup had been a Communist or a Leftist coup? Talbot answered without hesitation. Then, of course, they would have intervened, and they would have crushed the coup.” [William Blum, Killing Hope: U.S. Military and C.I.A. Interventions Since World War II, chapters 3 and 35]

Another charming chapter in U.S.-Greek relations occurred in 2001, when Goldman Sachs, the Wall Street Goliath Lowlife, secretly helped Greece keep billions of dollars of debt off their balance sheet through the use of complex financial instruments like credit default swaps. This allowed Greece to meet the baseline requirements to enter the Eurozone in the first place.

But it also helped create a debt bubble that would later explode and bring about the current economic crisis that’s drowning the entire continent. Goldman Sachs, however, using its insider knowledge of its Greek client, protected itself from this debt bubble by betting against Greek bonds, expecting that they would eventually fail. [“Greek Debt Crisis: How Goldman Sachs Helped Greece to Mask its True Debt”, Spiegel Online (Germany), February 8, 2010. Google “Goldman Sachs” Greece for other references. ]

Will the United States, Germany, the rest of the European Union, the European Central Bank, and the International Monetary Fund collectively constituting the International Mafia allow the new Greek leaders of the Syriza party to dictate the conditions of Greece’s rescue and salvation? The answer at the moment is a decided “No”.

The fact that Syriza leaders, for some time, have made no secret of their affinity for Russia is reason enough to seal their fate. They should have known how the Cold War works.

I believe Syriza is sincere, and I’m rooting for them, but they may have overestimated their own strength, while forgetting how the Mafia came to occupy its position; it didn’t derive from a lot of compromise with left-wing upstarts. Greece may have no choice, eventually, but to default on its debts and leave the Eurozone. The hunger and unemployment of the Greek people may leave them no alternative.

2 comments for “Killing Democracy in Greece”