Very few promoters of the Iraq War faced any accountability for their aggressive war, nor it seems were many lessons learned. This failure is being tested again as President George W. Bush’s brother Jeb seeks the White House without a serious critique of this bloody disaster, notes ex-CIA analyst Paul R. Pillar.

Jeb Bush’s foreign policy speech at the Chicago Council of Global Affairs has received generally poor reviews, and it not hard to see why. The slips of the tongue and of facts did not help, but more fundamental was the substance, or a lack thereof, that entitled people to ask, “where’s the beef?”

James Antle characterized accurately most of the substance as “interventionist clichÃ©s.” Bush endeavored to criticize the Obama administration, of course, for its policies toward the turbulent Middle East, but the listener was hard-pressed to discern from the speech exactly what Bush would be doing differently there. 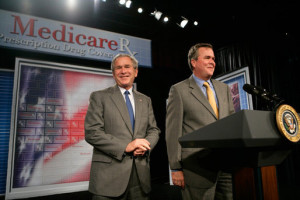 That uncertainty makes all the more important Bush’s handling of a topic that came up in the question-and-answer portion of his appearance: the Iraq War. One might be inclined to cut Bush some slack here in the interest of brotherly love, by not expecting him to repudiate, directly and explicitly, what was by far the biggest endeavor of his older sibling’s presidency.

But what about the presidency of his father, for whom Jeb Bush also expressed his love in his speech? George W. Bush’s launching of the Iraq War was a repudiation of the wisdom of George H.W. Bush and his advisers in not following up the U.S. victory in Kuwait in 1991 with an attempt at regime change in Iraq. Later events, of course, confirmed that the 1991 decision was indeed a wise choice.

The overall foreign policy of H.W. also was far more successful (including skillful management of the U.S. side of the end of the Cold War) than the policy of W. It would seem to be consistent with familial love and with good politics, as well as making good foreign policy sense, for Jeb Bush to identify more with the father than with the older brother.

Jeb Bush’s partial and circumlocutious acknowledgment of some of the things associated with the Iraq War that went wrong did not reflect any such good sense, and only served to perpetuate some of the misconceptions that promoters of the war have pushed ever since.

“There were mistakes made in Iraq,” said Bush, using one of the hoariest semantic devices to acknowledge in the passive voice that everyone realizes something is a disaster but to try to avoid identifying oneself with that disaster.

Of course there was in Bush’s answer the usual reference to bad intelligence about weapons of mass destruction, thus perpetuating the misconception that this is what drove the decision to go to war rather than being a convenient and scary selling point to muster public support for a war launched for other (mostly neocon) reasons.

If Bush has any doubt about that he could ask one of the most fervent promoters of the war, Paul Wolfowitz, who admitted as much in an unguarded comment in an interview and who, astoundingly, has not been banished to a policy wonk wilderness for being so closely identified with the enormous blunder that the Iraq War was but instead is now on Jeb Bush’s list of foreign policy advisers.

One of the mistakes that were made in Iraq, said Bush, was “not creating an environment of security after the successful taking-out of Hussein.” This perpetuates the myth, dear to many promoters of the war, that if things did not go well it was all just a matter of flawed execution. This totally evades the grand, fundamental mistake of launching the war in the first place.

It also begs the question of just how big and costly an effort Bush thinks it would have taken to “create an environment of security.” Maybe he could refer back to the judgment of the Army chief of staff at the time, Eric Shinseki, whose assessment on this question got him shunned and expelled from the administration of George W. Bush.

Jeb Bush lauded his brother’s re-escalation of the U.S. war in Iraq, the “surge” of 2007, as one of “the most heroic acts of courage politically that any president’s done.” The surge tamped down the violence of the Iraqi civil war enough so that when George W. Bush left office he could say that the flames in Iraq were not leaping as high as they were a couple of years earlier, and he could leave the remaining mess to his successor without having to say that Iraq fell completely apart on his watch.

That remaining mess included a civil war that was still being waged at a substantial, even if reduced, pace, a failure of the surge to facilitate political accommodation and compromise among the Iraqi factions, and the operations of extremist groups, including the group that now calls itself Islamic State and that was born as a result of the U.S. invasion of Iraq. Shoving such messes aside (at a cost of additional American blood and treasure) just enough to be able to get out the door and slam it shut while leaving office is hardly an act of courage, political or otherwise.

The Iraq War was not just the biggest endeavor of George W. Bush’s presidency; it was one of the biggest and costliest endeavors of U.S. foreign policy of the last several decades, as well as being the only major offensive war that the United States has initiated in more than a century.

American voters are entitled to expect candidates for their nation’s highest office to come fully to terms with the reality of that piece of recent history. Jeb Bush is not the only one who has to (Hillary Clinton still has to answer for the vote she cast as a senator in favor of the war resolution in 2002). But Bush’s handling of the subject in his appearance this past week leaves several serious and gnawing questions.

Would he, if president, put the nation at risk of getting into anything like the Iraq mess with another war of choice? What does his handling of this subject say about his attitudes about the use of military force, and his beliefs about what it can and cannot accomplish? Does he have any appreciation for the severe and widespread consequences the war has caused, and for the relationship of the war to some of the most serious problems in the Middle East today?

Brotherly love is insufficient reason to sweep such questions under the rug.

← Some Comments about Comments
Ready for Nuclear War over Ukraine? →